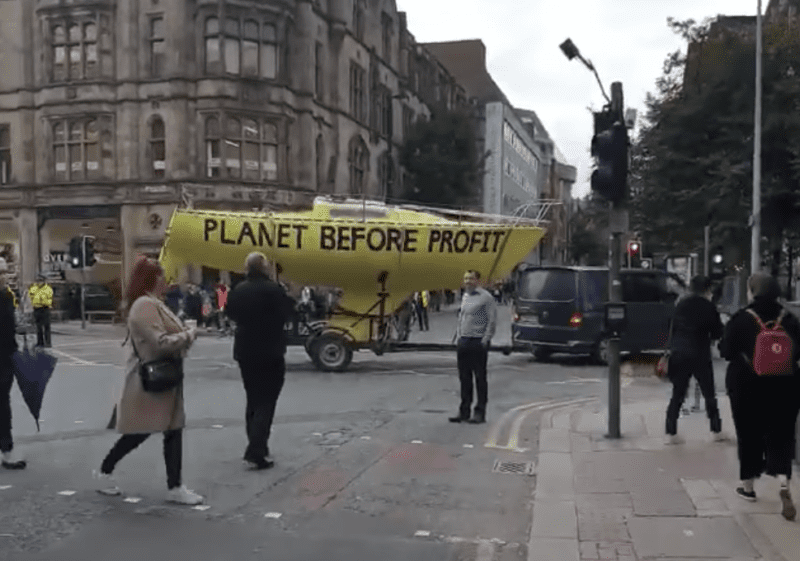 As you’ll most likely have heard by now, climate change group Extinction Rebellion has shut down Deansgate today.

The protestors set up this morning, Friday August 30th, and plan to stay there until Monday, saying they’re turning Deansgate into a 'giant, peaceful, family-friendly zone'.

Extinction rebellion have begun blocking all the access roads to the section of Deansgate (John Dalton St to St Ann’s St) that they plan to occupy for 4 days #manchester #ExtinctionRebellion pic.twitter.com/ETn2Sd5aCT

Extinction Rebellion say they want to expose the ‘huge contradictions’ of a city region that has declared a climate emergency while simultaneously planning to expand its airport massively.

The international movement was founded to shine a light on the global climate crisis we face. They write on their website: “We are facing an unprecedented global emergency. Life on Earth is in crisis: scientists agree we have entered a period of abrupt climate breakdown, and we are in the midst of a mass extinction of our own making.”

Deansgate is an apt spot for the protest, the road is one of the most polluted in the city, and there are illegally high levels of nitrogen dioxide in the air. Protestors also say it’s one of the worst streets in Manchester for pedestrians.

The police say they will facilitate a peaceful protest, but anyone breaking the law will be arrested, and council and transport bosses are warning people to expect possible delays on the roads.

Extinction Rebellion comes to Manchester.
6 people who don't work sit in the middle of Deansgate in an attempt to stop people getting to work.
Causing massive tailbacks, a longer commute for many, higher police presence and a massive carbon footprint - Great work morons.

And this last point is one of the many reasons why the protest has divided opinion in the city - for a lot of working people, it’s going to cause a massive disruption.

But this is exactly why Extinction Rebellion is protesting in this way, rather than picking litter or just handing out leaflets for example, because the best way to get your message out there to the wider population is to cause major disruption - something that grabs headlines, basically.

I see the well intentioned do nothings are complaining already in advance of the @ExtinctionR protests in Manchester tomorrow. Well, at least they're doing something about it, and until you come up with a better idea, your complaints fall on deaf ears

Feeling genuinely emotional walking down the middle of Deansgate and seeing people hang out, push prams in the road and kids play on hay bales. It feels so quiet and PEACEFUL. The planet is literally burning. We need to do so much more but @ExtinctionR I applaud you ??? pic.twitter.com/2aK9RQahBk

Whether people choose to listen to your message is another issue, as this kind of protest can sometimes stop people from sympathising with your cause.

The one that is clear is that we are facing a climate emergency, with 97% of climate scientists agreeing that climate-warming trends over the past century are very likely due to human activities.

According to a recent UN report, rising sea levels and catastrophic storm surges could displace 280m people unless more is done to limit greenhouse gas emissions - it’s the fourth report to call for radical action to help tackle environmental disaster.

Whether we choose to do anything about it is up to us as individuals, but for the sakes of our children and grandchildren, it’s worth at least listening to the reasons why Extinction Rebellion is protesting in our city.

We can’t be short-sighted about these things any longer...