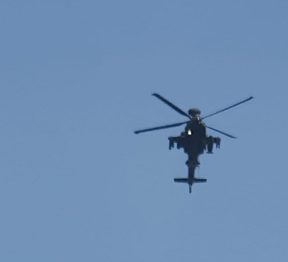 If you were in the Rochdale, Newhey, Milnrow or Bolton areas yesterday afternoon there’s a high chance you will have seen some military helicopters flying overhead.

People reported seeing up to four choppers flying low on Sunday, causing speculation as to why they were in the area.

They’re believed to be Apache helicopters, which are designed to hunt and destroy tanks and usually fly in pairs. The British Army website says the helicopters carry a mix of weapons, including rockets, a 30mm chain gun, missiles, and a defensive aid suite.

People on Twitter also reported seeing them over the M62 and at Dovestone Reservoir.

And now the mystery seems to be over, as the Manchester Evening News reports they were on a training exercise.

According to the MEN, one of the aircraft pilots flies over the Milnrow area frequently, so his little boy can see him.

He flies low so my son can see him. He is only five, he loves it. He always flies over this way so he can see him, he doesn't get to see him that much because of his job. He comes out with his friends, they were all waving.