Some people think the Earth is shaped like a doughnut, apparently 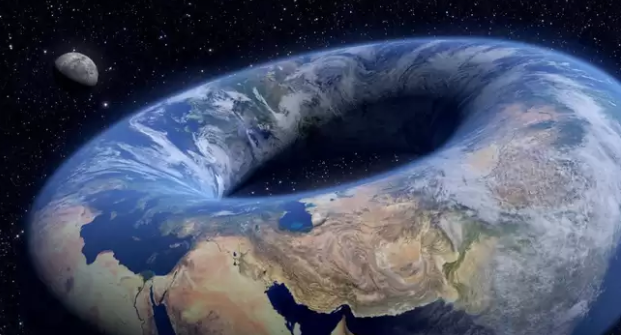 If you thought Flat Earth Theory was the daftest thing to hit the internet then prepare to have your mind blown - apparently the planet is, in fact, doughnut-shaped.

That’s right, someone has actually managed to make Flat Earthers seem sensible, which is a sentence I never thought I’d be writing.

As with most things like this, Donut Earth Theory (should have just called it Fat Earth) started on the internet, with a thread on TheFlatEarthSociety.org in 2008 putting forward the claim that our planet is torus-shaped (basically a fancy word for a doughnut).

It was later fleshed out in detail by a Flat Earth Society member called Varaug in 2012. He claims there’s a huge hole in the middle of Earth that we can’t see - how convenient - and according to Varaug: “Light bends and follows the curvature of the torus, making the hole ‘unseeable.’”

He even has a theory as to how gravity works on this large celestial sugary treat we call home: “Imagine a donut. Imagine a jam donut. Gravity acts towards the jam.” Delicious.

The original Donut Earth threads were rediscovered in 2016, which is when they really took off, with YouTube videos explaining the theory popping up online.

According to a lad named Dinosaur Neil on the Flat Earth Society website: “I am glad to see other supporters of toroidal earth theory here. I have been promoting it for a long time but nobody ever seems to back me up. I can't understand why.”

What’s that Dinosaur Neil, other people don’t agree with you that the Earth is a massive doughnut, presumably floating through space towards a giant cosmic, drooling Homer Simpson? Weird…