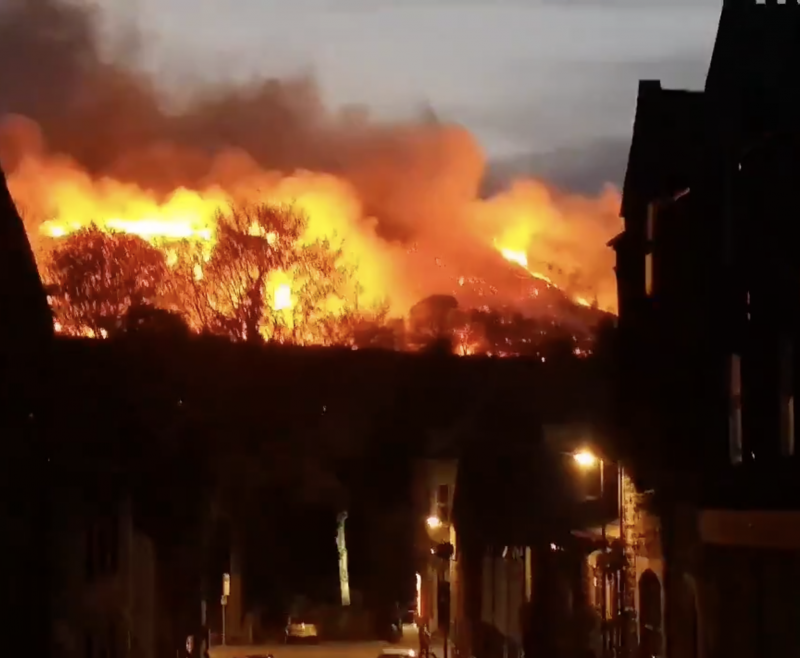 The blaze was one of five separate blazes in and around Greater Manchester in just 24 hours, leaving firefighters stretched to deal with them all.

Fire tore through land between Diggle, Denshaw and Delph, just near Saddleworth, another hit Marsden Moor in West Yorkshire, and Tintwistle in Derbyshire was also affected by flames.

@ChadWeather look at these moor fires near our house in Uppermill! Scary times ☹️ pic.twitter.com/o1RctqpAlk

On top of that, Monday evening saw Shaw Moor in Stalybridge hit by another blaze, while flames were also seen on the hills above Uppermill in Oldham.

Images and footage from the Uppermill blaze have been circulated on social media, showing massive flames scorching the moors outside the village, and getting scarily close to people’s houses.

Walked out of the house to this. #saddleworth #moorsonfire #uppermill @BBCNWT need to do a public information piece on bbq and fire awareness to help stop this. pic.twitter.com/yGKlYDyiew

The fires on Saddleworth Moor have spread to the outer bounds of Uppermill pic.twitter.com/JbLKkGvKag

Massive #fire in #uppermill near over the canal. Wow. Looks like the end of the world. pic.twitter.com/RgZrzII3O8

A spokesman for Greater Manchester Fire and Rescue Service said six fire engines were attending the scene by 9pm, with the first crews called to Uppermill at 7pm.

Thankfully the fire seems to have been put out now, but it left devastation in its wake, gutting the hills nearby and leaving the land charred and burnt.

‘It was like an inferno’ - the fire at #Uppermill has gutted the hills above the town. It looks like it’s now out but the landscape is charred and burnt. pic.twitter.com/1q8QbbXzn1

Dozens of fire crews were called out yesterday to tackle the separate incidents, with specialist wildfire units called in to assist them. Helicopters were used to scoop thousands of gallons of water from nearby reservoirs which were dropped onto the flames.

Hopefully this will be a reminder for people to never play with flames, discard cigarettes or have a bbq on the moorland when the weather is like this.