By The Manc
9news 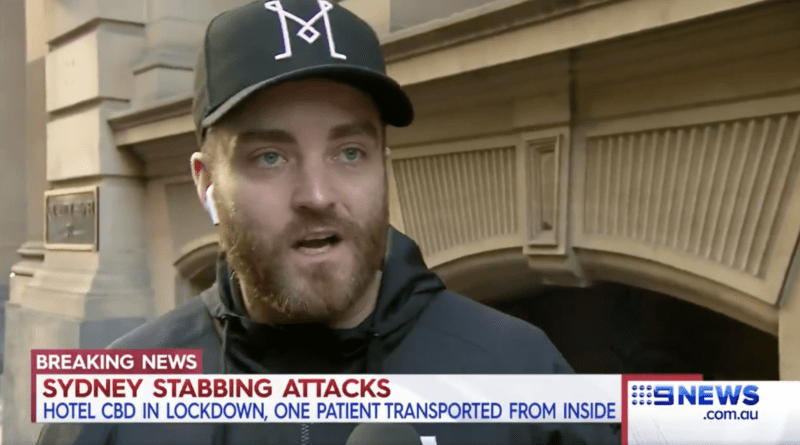 Three Mancunian lads have been hailed as heroes Down Under, after they helped tackle a knife attacker.

The men helped apprehend the suspect, as he attempted to stab multiple people in Sydney today.

Witnesses share their accounts of the Sydney Stabbing. #9News pic.twitter.com/QxxORsNlv9

The knife-wielding man shouted ‘Allahu akbar’ as he attempted to stab several people with a long knife near a busy junction in Sydney’s CBD, according to witnesses.

Lee, Paul and Luke were working at their recruitment agency nearby when they heard the attack, according to the Sydney Morning Herald.

We had a window open to get some air in and then we just heard the commotion … we looked out and saw him on top of a car wielding a knife and we all just kind of reacted from there. We just tried to get down as quick as we could ... You don't think … you just kind of react really, it was surreal, very, very surreal.

#Sydney CBD is in lockdown after a man with a large knife allegedly stabbed a woman and attempted to stab multiple others near a busy pub.
Members of the public, including a firefighter and tradies, were filmed holding the suspect #Sydneystabbing pic.twitter.com/hQylnKoDSj

The three men didn’t hesitate once they saw the attack, with Lee saying they attempted to disarm the man as they see Australia as their ‘new home’.

We all kind of chased, worked together, but it was Luke who was the real hero. He pursued him the hardest and managed to get a grip of him with another man. He had blood on the knife and there was blood all over his clothing, so hopefully no-one was [badly] injured, fingers crossed it wasn’t serious. Me, Paul and Luke, we've adopted Australia as our new home and you hear about this happening all over, especially the UK, and you think coming to Australia you’re really safe and you feel like you've kind of got away from it.

He added: “The first thing I'll do is give my mum a call."

Sydney stabbing: 41 year old woman who was stabbed in the back in Sydney CBD is stable, conscious and talking. Hospital says she’s recovering well and is unlikely to be discharged this evening @abcnews @abcsydney @rgloveroz

Footage online shows the attacker standing on the roof of a car with a knife and shouting.

According to an earlier statement from New South Wales Police a man has been arrested, and a woman is in hospital in a stable condition.

Police Commission says accused was carrying information about mass casualties, around North America and New Zealand. He was known to police, had a history of mental health issues. But insists no terror links. #Sydneystabbing #heroes #nswpolice

Around an hour after the suspect was arrested, a 21-year-old woman’s body was found inside a nearby apartment in central Sydney - it’s understood she suffered multiple stab wounds, the Guardian reports.

Police Commissioner Mick Fuller later told reporters the arrested man had a history of mental health issues, and they were investigating reports he had absconded from a mental health facility.