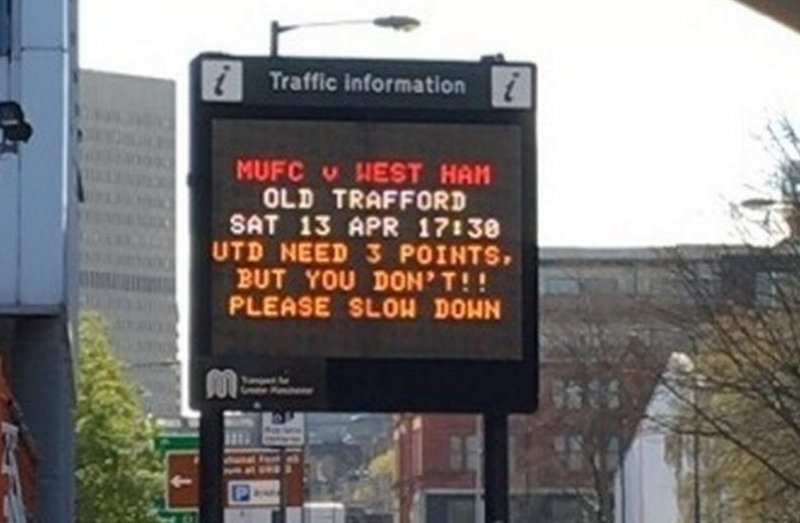 Transport for Greater Manchester are at it again, with yet another great football-related sign spotted out and about in the city.

They’ve been on a bit of a roll these past few weeks, and several digital transport signs have been spotted adorned with footy banter.

Before United took on Barcelona this week, they told drivers that: "Pique time will be Messi. Consider using tram or bus."

Transport for Greater Manchester having a field day ?#MUFC pic.twitter.com/EifiuuJwis

When City took on Cardiff the week before they couldn’t resist sticking the boot into Liverpool, claiming Cardiff were going to be playing their under 23s - a reference to Cardiff manager Neil Warnock’s comments about playing the youth side, after he took umbrage to refereeing decisions in a previous match (classic Colin).

And after it was announced Ole Gunnar Solskjaer would be given the Manchester United manager’s position permanently, they lit up one of their screens with the message: "Ole's at the wheel. Keep your hands on yours."

TfGM said at the time:

The intention of our roadside signs is to inform as many people as possible of upcoming events so that they can plan their journeys in advance. We’re glad that this light-hearted message has brought a smile to people’s faces and helped us get out an important message about the potential for match-related travel delays.

Their latest banter is a reference to United’s next game against West Ham on Saturday, which has been billed as a must win game for the Reds in their mission to crack the top four.

They love the football bantz those Manchester transport chefs. pic.twitter.com/kvs2r88lf7