A deer is currently on the loose in Manchester city centre 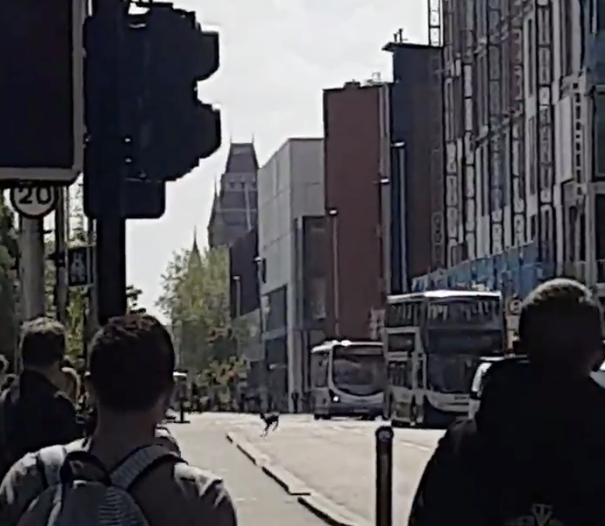 Erm, I don’t want to alarm you guys but there’s currently a rogue deer running around the city centre of Manchester.

In some breaking news this afternoon, the animal was spotted in various locations along Oxford Road, before heading to Gorilla.

According to GMP the deer was first spotted in the canal near Castlefield, and was last seen heading towards the Palace Theatre - the next show doesn’t start until 7pm so they’ve got a bit of a wait on their hands, but I guess they could always go to the nearby Spoons for a beer and a burger to kill some time.

Have some low quality shaky footage of the deer in action pic.twitter.com/BvLJpJPPRw

The police have described the animal as ‘brown and a deer’, so keep your eyes peeled if you’re out and about in town.

We currently have a deer running around the City Centre. The deer was first seen in the canal near Castlefield. CCTV asked for a description of the animal, "erm its brown and a deer" was the officers reply. Last seen heading towards the Palace theatre, officers have no eye-deer where its heading. Unconfirmed reports its suffering the ill effects of the morning after a wild stag do in the City - PCSO C [sic]

People took to Twitter to express their disbelief that a deer was roaming the city:

Why have I just seen a deer running down Oxford Rd. Always something in Manchester ???

@GMPCityCentre do you know anything about the rogue deer starting about Manchester City Centre? Ran past Gorilla 10-15 mins ago.. ?

If you’ve spotted the deer on its travels let us know, we’d love to see any photos or video you have of it.