By The Manc
Walkers 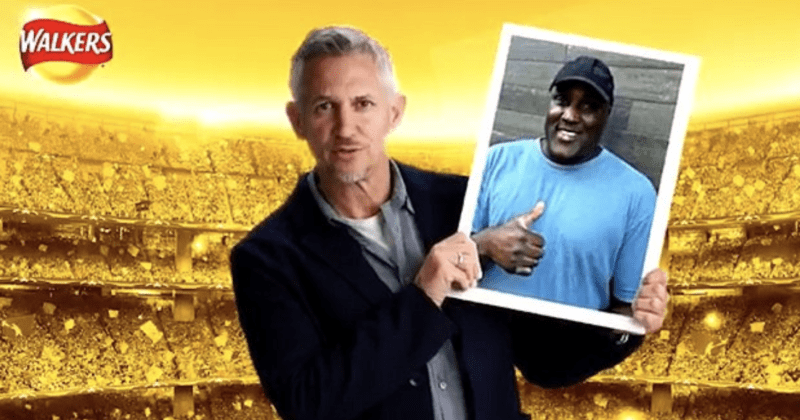 Cast your minds back to May 2017, a time when Walkers were promoting the Champions League final with a competition to give away some tickets for the match.

Their campaign was called #WalkersWave, and the popular crisp purveyors encouraged fans to tweet them with a lovely photo of themselves, after which Gary Linekar would hold up the photo in a video.

People who sent in a pic were then in with a chance to win tickets to the 2017 Champions League final, but the PR stunt backfired massively.

As the general public tend to do, they absolutely took the piss, sending in photos of a raft of unsavoury characters who Walkers then naively included in their videos, including Harold Shipman, Joseph Stalin, Fred West and Jimmy Savile.

They also featured a video of the one and only Akinwale Arobieke, aka ‘Purple Aki’, showing off a picture of the notorious muscle-squeezer before photoshopping his head onto a fan doing a Mexican wave.

The video is incredible, and is currently going viral again on Twitter with loads of people sharing the clip on the social platform.

In case you’ve been living under a rock your whole life, the 22-stone Manchester-born bodybuilder is infamous throughout the Northwest for asking to squeeze young men’s muscles.

Purple Aki moving to Newcastle was one of the things I least expected? belter pic.twitter.com/tbBmTe4z5q

Aki was recently seen out and about in Newcastle city centre, carrying a Sainsbury’s bag on Northumberland Street.

One man who saw Arobieke told ChronicleLive: "I locked eyes with him and he scurried behind a wall next to WH Smith. I asked can I get a photo of you squeezing my muscles but he said 'no, no I can’t - I’ll get into trouble'."

Arobieke’s odd muscle-squeezing obsession has got him in trouble previously, and he was issued a Sexual Offences Prevention Order (SOPO) in 2006 for repeatedly asking if he could squeeze men’s muscles.