People over 70 ‘shouldn’t be allowed to vote’, says ex-Apprentice star from Manchester 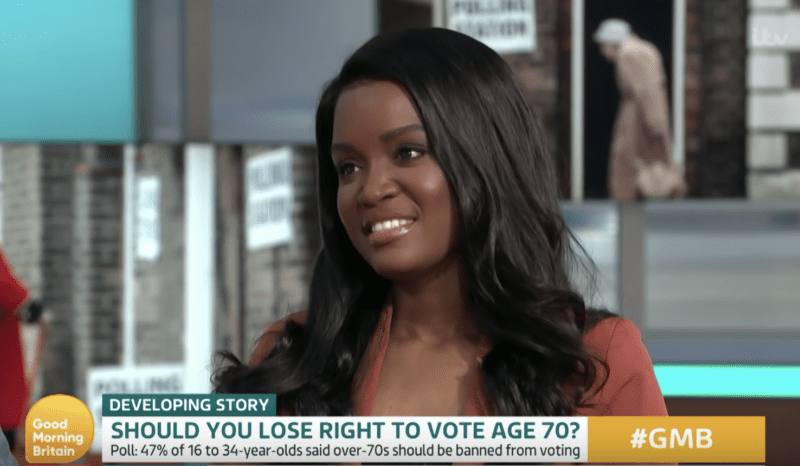 An ex-Apprentice star has divided opinion with her comments on voting rights for over-70s.

Joanna Jarjue, from Manchester, appeared on Good Morning Britain today to argue that anyone over 70 should have their vote taken away from them.

The 25-year-old went on to say the younger generation are having to withstand issues that are ‘so much harder’ than the ones older people dealt with, like climate change and Brexit.

Joanna appeared on GMB alongside Stanley Johnson to debate the issue, after a recent poll found nearly half of 16-34 year olds wanted people over 70 to be banned from voting, as they might not have to live with the consequences.

Stanley responded by calling her comments ‘insulting’, adding that 70 isn’t that old these days - host Adil Ray reminded Joanna that Jeremy Corbyn and David Attenborough would be banned from voting under her proposals.

We have talked about what potential repercussions there could be with Brexit and it could take the next 10 years, 15 years, maybe a whole generation. I think for a lot of older people and pensioners, you’ve been through a period where it was cheaper for you to buy houses, your wages were better... but we are trying to withstand things that are so much harder than your generation, so then to put Brexit on top of that, and to actually see that the younger generation predominantly didn’t want it.

It’s fair to say her comments didn’t go down well with viewers, who took to Twitter to have their say:

Did @joannajarjue really just say ‘we are trying to withstand things that are so much harder than your generation’ to the over 70s. ? #goodmorningbritain #Clueless #getoveryourself pic.twitter.com/zacdYyaYpZ

Who is this idiot Joanna Jarjue advocating that people should lose the right to vote at 70? Why is this even being discussed? @GMB #GMB

@GMB I am utterly disgusted that you even allowed the debate with @joannajarjue to air today. So all those who fought for our country’s freedom should have the right to vote be taken from them!! Absolute disgrace, shame on you.

Sat watching @joannajarjue on @GMB banging on about how people over 70 shouldn’t be allowed to vote and that younger people have it tougher these days. I worry about our future generations if people like this are around. The elderly have just as much right to vote as youngsters.

@joannajarjue Listening to you on GMB this morning, one would assume that you consider yourself capable of understanding modern politics? I have reached a different conclusion.

What are your thoughts? Let us know in the comments...