The #SummerProm2020 festival will be streamed live for students nationwide on the eve of exam results day. 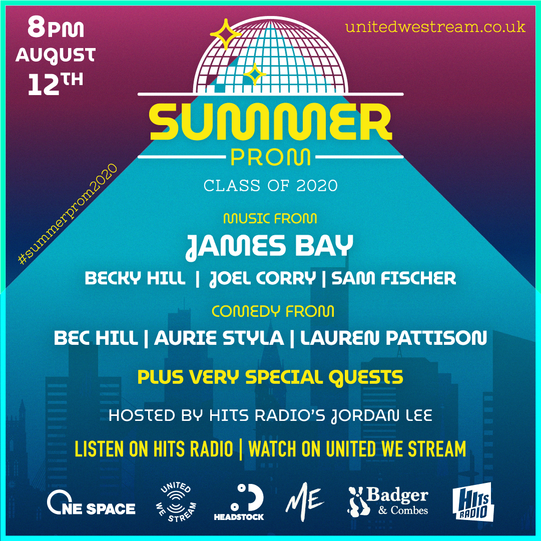 The full lineup of acts has been announced for the #SummerProm2020 festival which will be streamed live for students nationwide on the eve of exam results day.

British singer-songwriter James Bay is set to headline the special one-off celebration event which will look to unite thousands of young people across the UK ahead of A Level and GCSE results after an unprecedented and challenging school year.

This unique and free-to-access event will take place on Wednesday 12th August.

Hosted by Hits Radio presenter, Jordan Lee, the Summer Prom will also feature music from Australian musician Sam Fischer, pop sensation Becky Hill and DJ & producer, Joel Corry, who is currently #1 in the UK singles chart. The event – which will be broadcast from The Met live music and theatre venue in Bury – will also feature comedy from Bec Hill, Aurie Styla and Lauren Pattison, plus a number of surprise guest appearances.

The virtual prom has been created to raise awareness of mental health support available via One Space – a new partnership between Shout 85258, The Mix and Young Minds – for young people struggling with the legacy impact of lockdown.

Taking into account the recently introduced Greater Manchester restriction of no mixing of households, Summer Prom 2020 can be enjoyed by young people in their own homes through live stream via United We Stream GM across multiple social media channels.

Music performances and artist interviews will also be broadcast simultaneously across the Hits Radio network.

With the focus of providing mental health support to young people post-lockdown, earlier in the same day, GP and broadcaster, Dr Radha, will host a special mental health-themed Instagram Live ‘surgery’ on the @onespaceto Instagram page to help those who may be struggling, answer questions and offer tips and advice to anyone experiencing worry or anxiety.

Waiting for exam results is always a stressful time for young people, but this year many have also been dealing with anxiety and crisis in isolation.

Half (56%) of young people who mentioned coronavirus when contacting One Space partners for help listed anxiety as their main concern, a further 80% of young people surveyed said that coronavirus had made their mental health worse, with 87% reporting feeling lonely and isolated.

Victoria Hornby, Chief Executive of Shout 85258 – on behalf of One Space – said: “We are excited to be working with United We Stream GM and Headstock on the Summer Prom. The build up to exam results is always an incredibly stressful time for young people and this year especially so. The uncertainty is overwhelming for a lot of young people, and the summer ahead will see more challenges with exam results, a tough jobs market, and decisions to be made about university.”

“We know that a lot of young people are coping in isolation without access to their usual peer and professional support networks and that is why Shout 85258, The Mix and Young Minds are working together to deliver One Space – a space where under 25s can easily find the information they need and get the support they deserve.”

Headstock Founder, Atheer Al-Salim, added: “At a time when a lot of young people are struggling with the impact of the global pandemic on both their academic and social lives, we have the opportunity through music and shared experience to create an event that will help lift people’s moods.”

“We want people to celebrate their achievements of the past year, but also use the power of music to positively
impact young people’s mental and emotional wellbeing.”

“The Summer Prom will bring young people together – albeit online – and we’re delighted that Headstock is able to play its part in this extremely special event. We’re very much looking forward to creating a summer celebration that young people from Greater Manchester and across the UK will remember for many years to come.”

United We Stream GM founder and Greater Manchester’s Night Time Economy Adviser, Sacha Lord, said: “Getting exam results and entering university is already a stressful time, but the pandemic has added to the uncertainty and worry that young people across the UK are facing this year as they make big decisions about career choices, university places, moving out of the family home or getting a job.”

“The most important thing about results day is not to panic.”

“I struggled at school and left with two Us and an E at A Level, but I’ve worked hard to build a career I love. If you feel you haven’t done well in your exams, there are many alternative routes you can go down, so please remember it’s not the end of the world.”

He continued: “United We Stream brought people together throughout the lockdown, and I received countless messages from the public who said that it helped ease anxiety and bring a sense of community to the region. Because of this and acknowledging this stressful time, we wanted to do something for students who are about to get their A level results to give them something fun to look forward to and to take their minds off their looming results – a great party to enjoy safely with their own household.”

“This Class of 2020 Summer Prom event has been tailor made for them and I’m grateful to the artists
who have given up their time to be involved.”

“It’s going to be an absolutely fantastic show.”

Mayor of Greater Manchester, Andy Burnham, added: “The United We Stream Summer Prom will be a positive and celebratory broadcast for all young people to enjoy safely in their homes, and is another example of the caring spirit of people in Greater Manchester.”

“This is a fantastic idea, to give our young people in the city-region and beyond who are about to get
their exam results, something really special to look forward to. This can be a pivotal point in a young person’s life, and this particular age group, have missed out on so much because the pandemic forced thousands of children and young people to remain isolated at home, with their schools and colleges staying closed for months.”

“Thanks to the innovative team of public sector and private business who are behind the Summer
Prom concept, the Class of 2020 will have a unique celebration to remember.”

Tune it at 8pm on Wednesday 12th August.