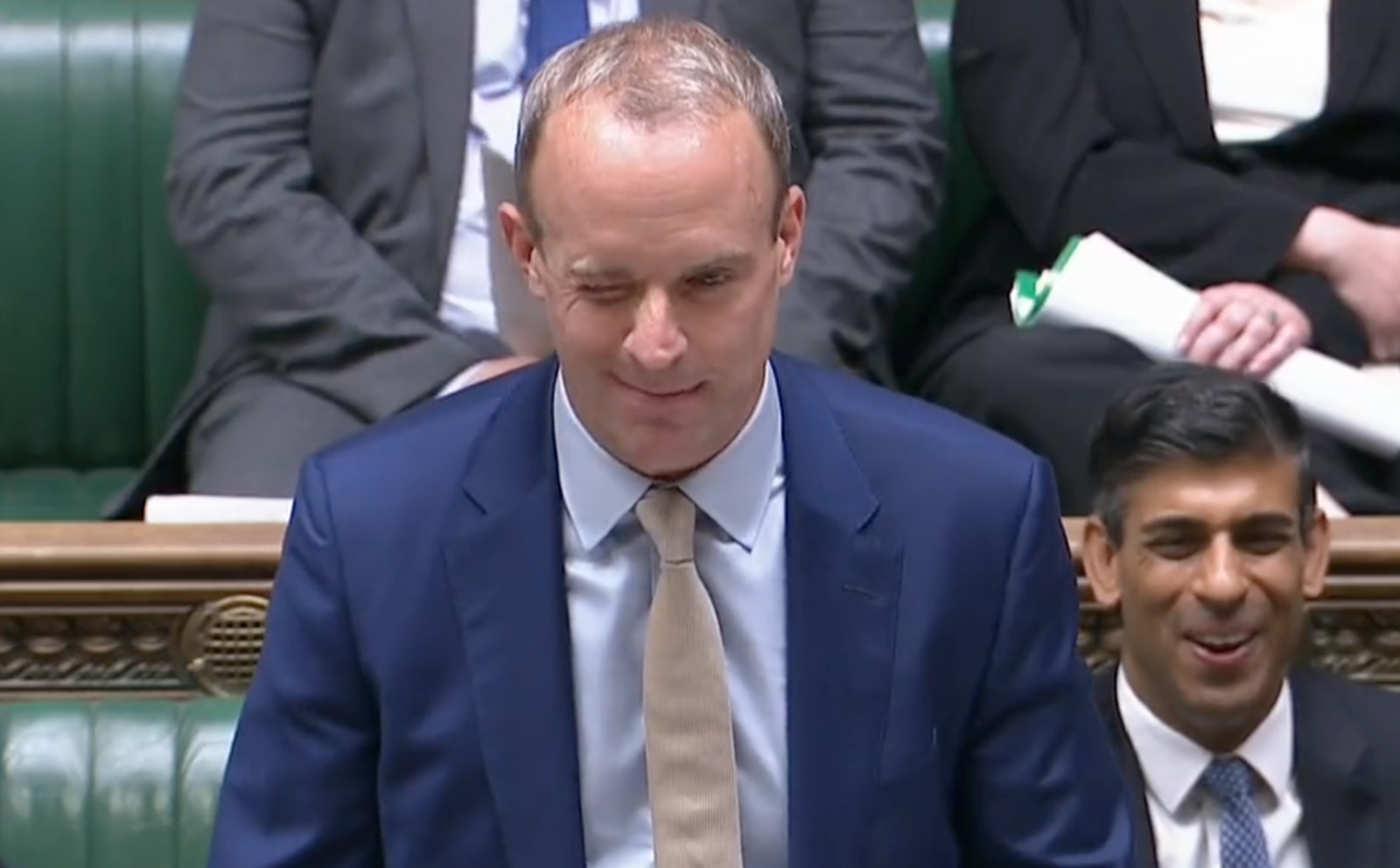 Sources close to Dominic Raab have spoken out in attempt to explain his controversial wink at Prime Minister’s Questions (PMQs).

During what was an eventful PMQs yesterday – which saw Deputy Prime Minister, Dominic Raab, and Deputy Leader of the Labour Party at MP for Ashton-under-Lyne, Angela Rayner, go head to head in the House of Commons in Boris Johnson’s absence – Raab was caught winking from the dispatch box in what appeared to be Rayner’s direction.

Not long after the wink was captured by television cameras, it was shared to Twitter and the social media platform soon became flooded with accusations of misogyny and calling the Deputy PM out on his “sexism”.

Labour MP Toby Perkins summed the situation up by tweeting he felt “soiled”.

Mr Perkins said: “I will never unsee Dominic Raab’s wink from the despatch box at Angela Rayner. I feel soiled,” and Angela Rayner responded to this statement in a now-viral tweet saying: “Imagine how I feel”.

The controversial wink followed an exchange in which Mr Raab accused Ms Rayner for dodging a question on last week’s national rail strikes, saying that she apparently “flip-flopped” in her position on the RMT Union’s industrial action.

Mr Raab said: “She was asked by the BBC, straight question, she’s usually a straight-shooting politician, ‘do you like the RMT?’ she said ‘I’m going to have to go now, I’ve got a train to catch’.”

In response to an attack from Ms Rayner over his previous stance on food banks, the Deputy PM said: “If the Labour Party, if she wants to help working people, they should be clear in standing up against these militant, reckless strikes.”

“Champagne socialism is back in the Labour Party.”

Laughter was then heard throughout the chamber for a number of seconds following this claim, and Mr Raab was seen winking in the direction of Labour’s frontbench.

“Sexism and classism all in one foul swoop,” one person said of the wink on Twitter.

Another Twitter user labelled the wink as “disgusting sexism”, and someone else asked if Speaker Lindsay Hoyle would “be having words and reminding MPs that such sexism is not allowed in the chamber”.

After continuous calls for Mr Raab to address the controversial situation and explain his actions, the Deputy PM’s team have now spoken out to insist that he was not winking at Angela Rayner and say he was actually winking at shadow Scottish secretary, Ian Murray.

Apparently, according to a source, they claimed that off camera, Mr Murray made a comment that was inaudible to those watching on TV home, in which he “muttered it would be ‘no bad thing’ if Angela Rayner stood for leader of the Labour Party”, ITV News reports.

Mr Raab’s wink was then allegedly in response to Mr Murray’s remark, but some social media users have questioned this explanation, with one person on Twitter highlighting that: “The comment about her running for leader wasn’t in that clip when he winked, so can’t have been in response to it.”

Ms Rayner has since received praise from supporters for her performance at PMQs yesterday.