The Woodland Trust is hoping to transform the area over the next 25 years. 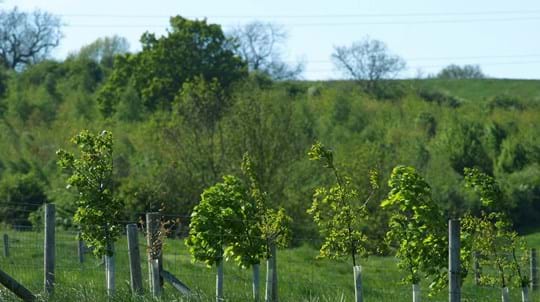 The Woodland Trust is planning to plant a huge forest of 50 million trees around major cities right across the north of England.

The North of England is home to around 13 million people, but this beautiful part of the country that us Mancunians call home has just 7.6% of woodland cover – which is significantly lower than the England average – and this is why the trust wants to transform the landscape of the area for years to come.

This ambitious project will be known at The Northern Forest.

The Woodland Trust is working together with City of Trees Manchester, The Mersey Forest, White Rose Forest, HEYwoods, and the Community Forest Trust to drive forward this government-backed initiative.

Stretching from Liverpool across to Hull, with the M62 as its spine, The Northern Forest will comprise of 50 million trees planted over 25 years.

Spanning over 120 miles across the cities of Bradford, Salford, Hull, Leeds, Manchester and Liverpool, The Northern Forest – which is already currently in progress – will help provide natural flood management, boost wildlife habitat for woodland birds and bats, and protect ancient woodland areas and iconic species – such as the red squirrel.

It will also improve health and wellbeing by providing a tranquil space for millions of people living in the area, and will generate more than £2 billion for the country’s economy.

The Northern Forest will both “accelerate the creation of new woodland” and “support sustainable management” of the existing woods right across the area.

According to the Woodland Trust, many more trees, woods and forests will deliver a better environment for all by “improving air quality in our towns and cities, mitigating flood risk in key catchments, supporting the rural economy though tourism, recreation and timber production, connecting people with nature, and helping to deliver improvements to health and wellbeing through welcoming and accessible local green spaces”.

City of Trees is one of the Community Forests, and is the Greater Manchester part of The Northern Forest.

There are plenty of ways that those with a green thumb or an interest in eco matters can get involved too, and as the Woodland Trust says: “we can’t create a new Northern Forest without you”.

If you’re a landowner interested in helping grow The Northern Forest, you can apply for subsidised trees or a grant for planting. If you’re keen to provide additional investment to The Northern Forest scheme, to ensure a project of this scale receives continuous funding and meets the target of 50 million trees planted over the next 25 years, you can apply to become a Woodland Trust Partner, and if you’re looking to help grow The Northern Forest, the Woodland Trust and Community Forests will be hosting regular public tree planting events that you can be involved in.

You can find out more information about The Northern Forest here.