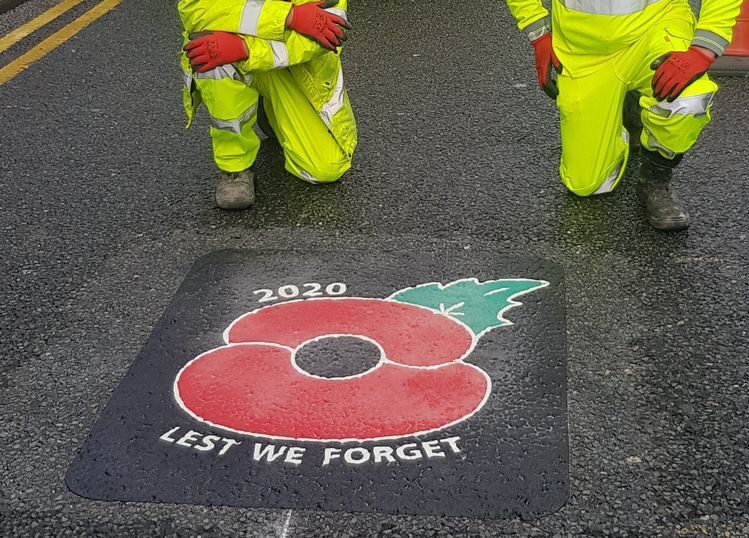 Bolton will commemorate Remembrance Sunday this year with specially-designed ‘Lest We Forget’ poppy markings painted on roads across the borough.

Remembrance Sunday parades all across the UK have had to be cancelled this year amid the coronavirus (COVID-19) pandemic, however, 12 poppy signs with the wording ‘Lest We Forget’ are being painted near war memorials, or on roads where parades would have taken place across the Greater Manchester borough of Bolton.

Local highways contractor, Kays Traffic Management, offered to install the markings free of charge as a way of helping residents remember those who have died in conflicts around the globe.

Bolton is the first location in the country where poppy signs are being painted on the road.

The first four signs have been installed on Bradshawgate, near the Nelson Square war memorial in the town centre, on Darwen Road, near the Dunscar War Memorial, Knowsley Street – the nearest location to the Victoria Square Memorial – and on Nelson Street outside the army barracks.

Poppy signs are also set to be painted near a number of other war memorials – Albert Road in Farnworth, Chorley New Road, Church Road/Market Street in Westhoughton, Manchester Road in Kearsley, Market Street in Little Lever, and Scholes Bank in Horwich.

Markings will also be installed on Belmont Road, Astley Bridge (near the Royal British Legion), and Manchester Road in Blackrod (near the cemetery).

Speaking on the alternative commemorations this year, Cllr David Greenhalgh – Leader of Bolton Council – said: “Remembrance Sunday is, for me, the most important day in the civic calendar, and I know how disappointed many residents will be that parades are unable to go ahead this year, and that services at war memorials will not be able to take place as they usually would.

“We were delighted when Kays offered their time and support for free and offered to paint these signs. This is just one of a number of ways in which we can demonstrate our commitment to never forget our fallen and will be seen by thousands of Bolton’s residents over the following weeks.

“I urge you all to still support the Royal British Legion who have been unable to do the same level of fundraising as normal.”

Cllr Andy Morgan – Armed Forces champion for Bolton Council and ex-serviceman – added: “Remembrance Sunday commemorates everyone who served in the World Wars and subsequent conflicts [and] this year is the first year for decades we are not able to carry out our normal acts of Remembrance, so it’s really important that the public think of respectful and innovative ways of remembering veterans, both past and present.”

Shaun Hargreaves – Commercial Director at Kays Traffic Management – said: “We are delighted to be able to offer our support as a way of commemorating our war heroes.

“We hope that the road poppies will provide a reminder that although we cannot stand together in remembrance in person this year, we will never forget the sacrifice made by the brave men and women for our freedom.”

Members of the Greater Manchester public and wider community who wish to pay their respects are invited to watch an online Remembrance Service taking place at Bolton Parish Church on Sunday 8th November.

It can be viewed via the Bolton Council website here, and will also be broadcast live on Bolton FM.

Wreaths can also be laid at any of the borough’s war memorials any time from Remembrance Sunday to Armistice Day, and the council is also encouraging people to mark Remembrance Sunday by taking part in a two-minute silence from their doorsteps at 11am on Sunday 8th November 2020.