Paola Gallardo is taking on the challenge after her daughter Sonia's devastating diagnosis in 2019. 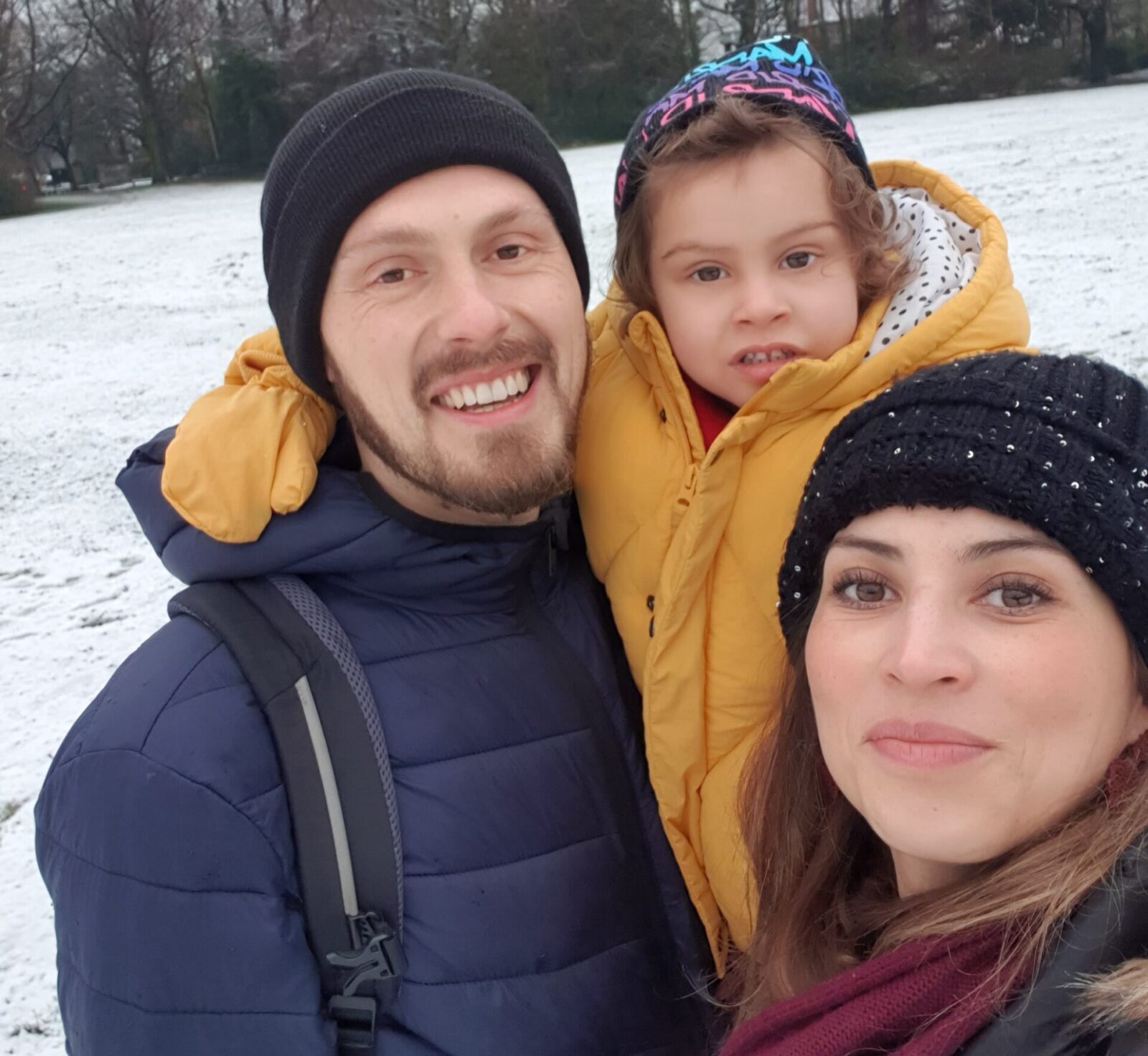 A mum is planning to take on an incredible challenge next month to raise vital funds for a worthy cause after a brain tumour diagnosis devastated her family.

Paola Gallardo – 35, from Sale in Trafford – will attempt the 10,000 Steps a Day in February Challenge to raise money for Brain Tumour Research in support of her three-year-old daughter, who is living with a brain tumour.

Her daughter Sonia was diagnosed with a brain tumour in August 2019, following months of tests to try and find the cause of her unexplained weight loss.

“Sonia was nearly 18 months old when we noticed she was losing weight”, Paola explained.

“She weighed 10 kilos at 12 months, but six months later she’d dropped to nine kilos. We saw the GP, who thought it was because she was beginning to walk and move more [but] she’d also stopped breastfeeding and had started nursery, so there were lots of changes going on.

“As a mum, I was worried I wasn’t giving her the right foods, but she seemed to be eating normally and enjoyed healthy food, especially broccoli and avocado [so] I spoke to the health visitor, who encouraged me to put pressure on the GP for a referral to a paediatrician”.

In March 2019, as Sonia’s weight was still not increasing, they were referred to a paediatrician at Trafford General Hospital.

Sonia, who was two at the time, underwent blood tests, but no cause for her weight loss was found.

Paola continued: “In May 2019, they took stool samples and she had an x-ray and an ultrasound on her stomach [but] again, they found nothing.

“Four months later, we were sent to the gastroenterology department at Manchester Royal Children’s Hospital [and] they carried out a colonoscopy and a biopsy and did further blood tests and scans.

“They also tested for diabetes, as she was drinking a lot of water [but] nothing revealed any abnormalities.”

Finally, Sonia was sent for an MRI scan, which to Paola’s huge shock, revealed a large mass on her brain.

“My husband and I were completely dumbfounded.” Paola continued.

“I had started to think there was something seriously wrong with Sonia, but I never suspected a brain tumour – we couldn’t believe it. At that stage, they didn’t know whether it was low or high grade, or whether they would be able to operate [and] we had to wait a few days for a biopsy.”

Sonia’s biopsy revealed the tumour was a suprasellar low-grade glioma, near to the pituitary gland – which influences many processes, including growth.

Because of its location close to the optic nerve, Sonia’s tumour was inoperable.

Paola added: “We discussed Sonia’s treatment plan with her consultant oncologist and opted for an 18-month course of chemotherapy, which she started in September 2019. She had to have a port inserted next to her heart, through which the drugs would be administered weekly.

“Being in hospital made Sonia very upset and angry and she cried a lot.”

As she contracted viruses and suffered high fevers at the beginning of her chemotherapy regime, Sonia spent much of October, November and December 2019 in hospital, but in December, Paola’s family visited from Mexico and by January 2020 Sonia was well enough to celebrate her third birthday at home with her relatives.

Paola said: “Even though 2020 was a hugely challenging year for so many people, for us, it was really positive, as it marked significant improvement in Sonia’s health.

“As her chemotherapy progressed, her mood improved. She gained weight and the tumour even started to shrink a little bit. In September she was well enough to start pre-school, which was just fantastic after everything she has been through.

“She’s thriving and is very happy.”

Sonia has 17 weeks of chemotherapy left, and she continues to be monitored with MRI scans every three months.

Paola is set to join thousands of other fundraisers around the country by completing 10,000 Steps a Day for 28 days next month in aid of Brain Tumour Research.

“Research is really important to us, as it meant that when Sonia got her diagnosis, she had treatment options and when there are options, there is hope.” Paola said.

“I’ve signed up to this challenge to raise awareness and support a cause really close to our hearts.

“My own mental health suffered because of Sonia’s illness and I overate and gained weight, as I struggled to cope [so] I have started walking and running again to lose the weight and I’m hoping that joining this challenge will also impact positively on my mental wellbeing.

“And as well as getting out and pounding the pavements, I’ll be clocking up the steps by dancing with Sonia [as] it’s something we love to do together.”

Sonia’s dad Ivan Aparicio added: “We have been very lucky so far because Sonia has responded to the treatment [but] throughout our journey, we have encountered families whose children have exactly the same tumour as Sonia and they are on their third round of chemo and slowly going blind.

“It breaks my heart and terrifies me to see what this brain tumour can do.

“While chemotherapy is a well-known treatment, it isn’t always effective, and its side effects can have a lasting impact on a child’s life.

“More research is definitely needed to find treatments that are predictable, effective and safe.”

Brain tumours kill more children and adults under the age of 40 than any other cancer, and the only way to change that is through research to find more effective treatments and ultimately a cure.

Matthew Price – Community Development Manager at Brain Tumour Research – added: “We were so sorry to learn about Sonia’s brain tumour diagnosis, but we are also really pleased that she is making good progress and responding well to treatment.

“We wish her all the best for the rest of her chemotherapy.

“We thank Paola for signing up to take part in our challenge and will be with her every step of the way, helping to get us closer to a cure.”

Donations to Paola’s challenge can be made here.

You can find further information about the 10,000 Steps a Day in February in the challenge’s dedicated Facebook group here, and learn more via the Brain Tumour Research website.