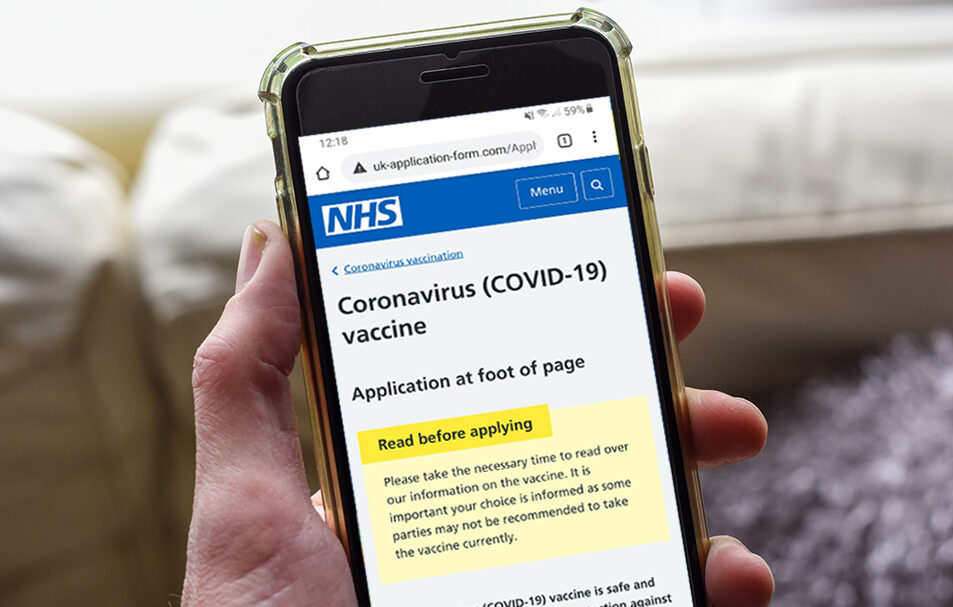 Police and officials are continuing to urgently remind the public to remain vigilant in the wake of an ongoing coronavirus (COVID-19) vaccine text message scam.

A formal warning has been issued by the Chartered Trading Standards Institute (CTSI).

The organisation reported that it has received evidence of fraudulent messages being sent to the public informing them that a dose of the new COVID-19 vaccine is available to them.

People are being sent a text message claiming to be from the NHS which informs the recipient that: “We have identified that you are eligible to apply for your vaccine.” and the message ends with a link to a bogus website mocked up to look like a legitimate NHS platform.

The website requests personal details, including name and address, and most-concerningly asks for banking details, which are supposedly for verification.

The CTSI has confirmed that this is the latest in a series of scams themed around the pandemic in circulation since last March.

With the UK vaccine rollout now underway, scammers have modified their hacking attempts to consider this new development, with such phoney messages first being reported at the end of December by people living on the Western Isles of Scotland, and leading the NHS on the Isles to inform the public that: “Health Boards will never ask for any details about your bank account.”

This scam is by no means limited to the region though, and people throughout the UK are warned that they may receive similar messages.

Speaking on the rise of the scam, Katherine Hart – Lead Officer at CTSI – said: “I have been tracking and warning the public about COVID-19-related scams since the beginning of the pandemic, and at every stage of response, unscrupulous individuals have modified their campaigns to defraud the public.

“The vaccine brings great hope for an end to the pandemic and lockdowns, but some only wish to create even further misery by defrauding others.

“The NHS will never ask you for banking details, passwords, or PIN numbers and these should serve as instant red flags.

“Do not provide any information to the scammers, but please also report suspicious messages to Action Fraud, or if in Scotland, Police Scotland, as this provides intelligence and assists authorities in combating scams.”

Greater Manchester Police has also issued a warning to local residents regarding the issue on social media this week, confirming that: “Fake NHS text has been circulating telling people that they’re eligible to apply for the COVID-19 vaccine.

“Do not click on links in unknown texts [and] never give out your personal details.”

Action Fraud – the UK’s national reporting service for fraud and financially motivated cyber crime – has also confirmed this week that it is continuing to receive “a high volume of reports about fake coronavirus vaccination emails and texts”.

A total of 1,166 vaccine-related scam emails were reported over 24 hours.