The series will feature nine coins, which celebrate the inhabitants of the Hundred Acre Wood. 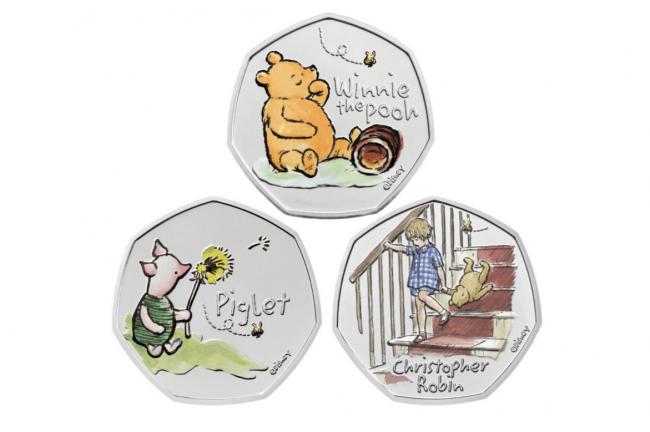 This collection of 50p coins – which is a nostalgic reminder for fans of the ‘silly old bear’ and his friends – is inspired by the classic stories of A. A. Milne and features the original illustrations of E. H. Shepard. It’s the first time the world of Winnie the Pooh has been celebrated on coins struck by The Royal Mint, and these official UK coins have been approved by Buckingham Palace.

The series will feature nine coins, which “celebrate the inhabitants of the Hundred Acre Wood”.

The first three – which have been released live on The Royal Mint website today – feature Winnie the Pooh, Christopher Robin and Piglet, and six more coins will follow two years.

The limited edition commemorative coin is available in a range of finishes.

It includes base metal – also known as ‘Brilliant Uncirculated’ – Silver and Gold and offers those interested in buying one the option to purchase coins that have been digitally printed with the latest innovative technology, which the Royal Mint say brings Shepard’s iconic illustrations alive in vivid detail and colour.

Daniel Thorne – Product Designer at The Royal Mint – said: “Working with original illustrations from E.H. Shepard, supplied to us by Disney, my biggest priority with the coin’s design was to ensure we do these wonderful images justice.

“As the original maker of coins, The Royal Mint has a long history of exquisite craftsmanship and this coin is no exception. Bringing the illustrations of E.H. Shepard to life took a lot of craft and care.

“From the honey bee motif that runs throughout the series, to the grassy mound Pooh is sitting on, we tried many different techniques to create the flawless effect of watercolour on the coin, eventually settling on the one you’ll see on the final version.

“I’m honoured to have been able to work on this exciting coin.

“Winnie-the-Pooh was a huge part of my childhood and forms some of my fondest memories, so I wanted to make sure this series of coins truly encapsulated the spirit of Pooh Bear and all his friends.

“Creating these coins was a labour of love and I hope that collectors can appreciate the beauty in each and every design in the range.”

Clare Maclennan – Divisional Director of Commemorative Coin and The Royal Mint Experience at The Royal Mint – added: “Over our 1,100-year history we’ve minted coins to commemorate key moments and figures in Britain’s history, including literary icons, like Shakespeare and Wordsworth through to Beatrix Potter’s mischievous Peter Rabbit, and we’re delighted to now add A.A. Milne’s loveable Winnie-the-Pooh to the list.

“Our childhood character coins are encouraging a new generation of coin collectors and we’re delighted to add this iconic character and his friends, to our range. We’ve all grown up with Winnie-the-Pooh and he remains a cherished character, not only in Britain but across the world.”

You can find more information and purchase these limited edition Winnie the Pooh coins via The Royal Mint website here.