Manchester is synonymous with bees, and now we have the opportunity to help save them. 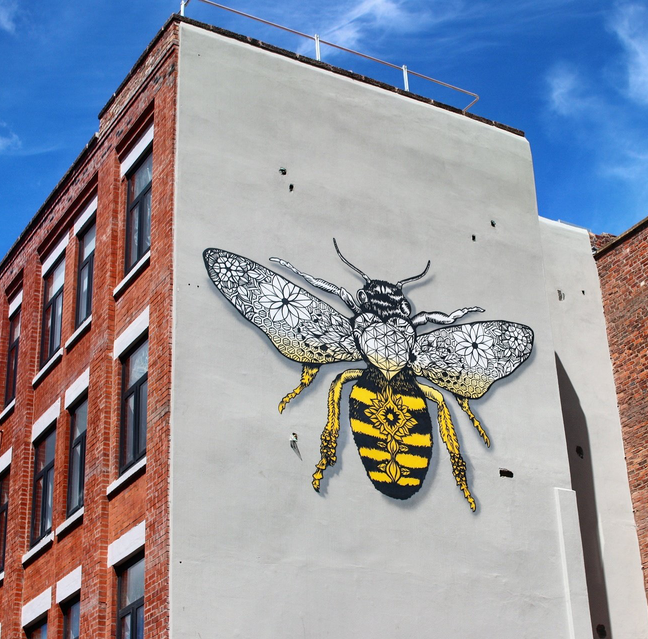 We all know that Manchester and bees go hand in hand.

Bees have been an emblem for our city for over 150 years, so it’s fair to say that we’re quite-rightly proud of our links to this hard-working insect.

It all started in 1842 when, as part of a traditional Victorian branding exercise, the early city fathers had to decide on a coat of arms that would tell the world who Manchester was, so they settled upon including a globe with seven worker bees in to show how hard Mancunians worked, and then traded it across the seven seas.

The Manchester bee was born of industry, and the city’s people have fought to make this place thrive.

While there is said to be over 250 species of ‘solitary bee’ buzzing around in Britain, Manchester’s worker bee reflects the city as a hive of activity, and represents a sense of unity at times when it’s needed most.

Mancunians are pretty fond of our bees, which is why when it was announced last month that the UK government had bowed to pressure from the National Farmers Union and agreed to authorise the use of the highly-damaging neonicotinoid thiamethoxam – also known as bee-killing pesticides – for the treatment of sugar beet seed in 2021, it got many up in arms.

Prior to this decision, bee-killing neonicotinoids had been banned across Europe since 2013.

Environment Secretary George Eustice made the decision to authorise the use of the neonicotinoids in response to the potential danger posed from beet yellows virus, but this was despite a similar application being refused in 2018 by the UK Expert Committee on Pesticides due to “unacceptable environmental risks”.

In 2018, the UK government supported restrictions on the neonicotinoid pesticides across the European Union, due to the very clear harm that they were causing to bees and other wildlife, with the then-Environment Secretary, Michael Gove, promising that the government would maintain these restrictions, unless the scientific evidence changed.

But the evidence has not changed, and this has lead to many campaigners speaking up and taking action.

The Wildlife Trusts have spoken out against the approval, saying: “The devastating impact this group of pesticides is having on our wildlife has increased, and hardly a month goes by without yet more evidence of the wider ecological crisis”.

Joan Edwards – Director of Public Affairs at The Wildlife Trusts – also personally added that: “The Secretary of State’s decision to authorise the use of an environmentally devastating chemical to increase production of a crop with no nutritional value is madness… [and] the UK Government cannot claim to be a ‘world-leader’ on protecting and restoring nature, whilst supporting the use of these damaging pesticides.”

Academic and author, Professor Dave Goulson, has warned that one teaspoon of neonic is enough to kill 1.25 billion honeybees, which is equivalent to four lorryloads.

And Greenpeace UK has branded the decision as “posing a lethal threat to bee populations”.

The latter of the those parties has taken it once step further though – and this is where Mancunians can step in to help save the insects that mean so much to our city.

The UK arm of global non-governmental environmental organisation Greenpeace – who’s aim is to “defend the natural world, and stand for a green and peaceful future” – has launched a petition to urge Environment Secretary George Eustice to reverse this decision.

The petition description reads: “Bees are essential for our survival.

“They pollinate much of what we eat and play a critical role in sustaining ecosystems around the world, but the last decade has been devastating for insect populations, and bees have been hit hard – with populations shrinking by a third in the UK.

“Bee-killing neonicotinoids have been banned across Europe since 2013, but the UK government has just approved these deadly chemicals for emergency use, posing a lethal threat to bee populations.”

It continues: “George Eustice has the power to change all of this.”

“As Environment Minister, he can show he’s on the side of nature by enforcing a total ban on bee-harming pesticides. He’s approved this emergency use of a deadly pesticide, but we need to remind him that we’re in the middle of a climate and nature emergency [so] if lots of people sign this petition, we can pile pressure on the government to quickly reverse its decision and keep bee-killing pesticides away from our environment”.

The organisation is fighting to “enforce a total ban on bee-killing pesticides”, and is therefore encouraging both Mancunians and people all across the UK to “get the Environment Minister to act fast” with their signatures.