Brothers Elliott and Ted spent over two months building some of their hometown's most iconic landmarks. 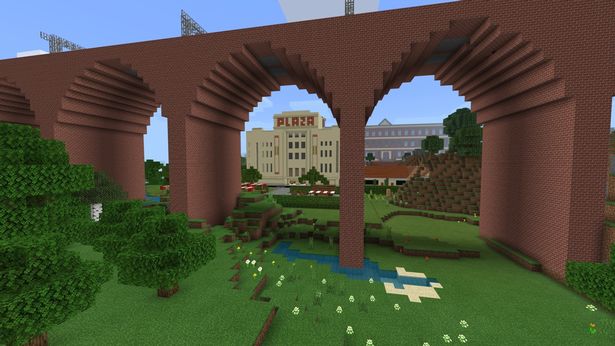 Two young lads have recreated their hometown of Stockport in the ever-popular video game Minecraft and it looks absolutely incredible.

Showing some pretty admirable teamwork, brothers Elliott, 13, and Ted, 10 – both from Heaviley – joined forces with their dad Paul and spent over two months building some of Greater Manchester borough’s most iconic landmarks as part of a new interactive gaming experience.

Paul Jones runs children’s party business TechTruck, which usually offers a mobile gaming cafe experience from the back of an adapted van, but due to the ongoing coronavirus (COVID-19) restrictions, he had to come up with a new way of providing the unique service.

And he did so by moving it online, opening up opportunities for residents in Greater Manchester and beyond.

Paul and his two sons developed a new game based on a book called The Puzzle Cube.

Using characters and locations from the story, children play together online in a Minecraft world to complete a series of challenges, while a TechTruck host guides them through the world of the Puzzle Cube to search for clues and solve the cryptic riddles, with plenty of familiar landmarks along the way too.

The games have already proved to be popular, with recent parties having connected friends from Muscat, the United Arab Emirates and the UK via the online events.

Speaking on his adapted business venture, Paul said: “We have a gaming business where we do children’s parties, but due to lockdown we’ve had to shut up shop in March and in the summer we realised the only way we could carry on would be to do it online.

“That way we could still offer the parties during lockdown.”

He continued: “My sons Elliott and Ted are massive Minecrafters, especially my eldest son, he’s Minecraft crazy and he’s helped me out in a huge way,”

“The game itself, you follow clues based on a book called the Puzzle Cube, and as you go around the world, you find lecterns that offer clues and hints about where to go to next.

“Once you reach the end of a section you are given a piece of a puzzle that you throw into a hopper.

“My son has coded the game so that once you throw the piece into the hopper, you get transported to a different place [and] there’s a bit of VT over Zoom that then explains the next part of the story and then you continue somewhere else.”

“In [The Puzzle Cube book], there are two children who are trying to find their way back,” Paul explains, “and we were influenced by wanting to recreate part of the book in our game.

“We know Stockport, my sons see the Viaduct all the time, so they could pretty much build it from memory.

“At the moment we have the pyramid, the viaduct, and then we’ve got the Plaza which you can actually go in.  One of the clues is to go where the actors get changed to in the game you have to go all around the theatre, back stage into the little dressing room which gives you the next clue.

“We’ve also got the factory, which is a disused cotton mill based on Houldsworth Mill in Reddish.

It’s got all the looms, but they aren’t working any more [so] you’ve got to find your way around the mill to the top floor to find the next clue.”

There’s no denying that the game has been a labour of love for the Jones’, taking several months to create and still being a work in progress.

But they’re not stopping yet, as a second game is already in the pipeline.

Paul added: “We’ve put hundreds and hundreds of hours in. It must have taken since the start of summer until October and it’s still being worked on now, so a really really long time.

“The games are an hour long each, but we’ve found that people who have been on parties with friends have gone on to book a session for themselves [and] we don’t want people going through the same experience a second time, so we are building game two at the moment.

“We’re hoping to include the church, the old infirmary and the marketplace in this one, but the world is our oyster really and we are open to ideas for what’s next.”

TechTruck parties – which are recommended for ages between seven to 11 – can be booked online, with 60-minute events for up to 10 children setting you back £99.

You can find more information and book yours here.