Following much speculation last night, bosses have confirmed that this weekend’s Great North Run will still go ahead.

Describing the event as a ‘fitting tribute’ to Queen Elizabeth II. organisers confirmed that the main run, which is known for being the biggest half marathon event in the world, would continue as planned.

The decision was made this morning following a meeting between council leaders, organisers, broadcasters and others involved in staging the huge event, which is expected to raise millions of pounds for charities.

However, they also said that some elements would be more subdued out of respect to the Royal Family as they moved to cancel the Great North 5K, originally due to take place on Friday evening, and the Junior and Mini Great North Run.

“There will be an appropriate tribute made and whilst we want runners to enjoy the day we will be encouraging everyone to be aware of the very sad and very special circumstances in which the event will be taking place.

“We would encourage runners to communicate their respect for the Queen in any way they feel appropriate, and look forward to welcoming runners from all over the UK and the world to the North East this weekend.

“We will endeavour to ensure the event runs smoothly but we will do so ever mindful that the nation has lost someone whose death is a defining moment for all of us, and who will be in our hearts and minds not just today and tomorrow, but long into the future.” 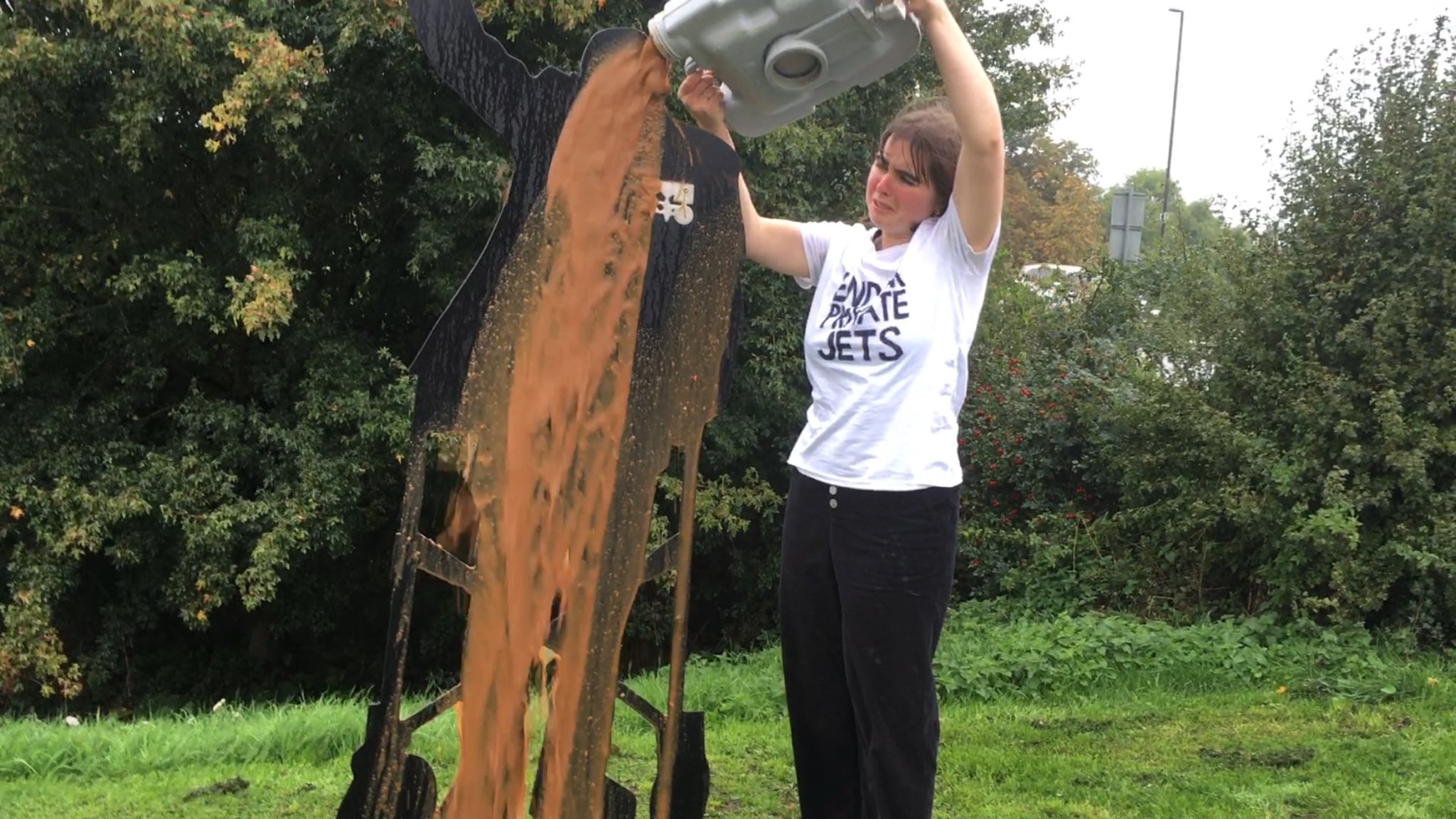 A woman from Manchester could be facing jail after pleading guilty to criminal damage – an incident in which she poured human faeces over a memorial to Captain Sir Tom Moore.

The 21-year-old carried out the stunt as part of a climate protest, wearing a t-shirt that said ‘End UK private jets’.

Video shared on social media showed her pouring a canister of human waste over the life-size statue of the World War II veteran and fundraiser.

The statue is located in Thistley Meadow, Hatton, south Derbyshire, and was placed there as a tribute to Captain Tom, who raised almost £33 million for NHS charities by walking lockdown laps of his garden in the run up to his 100th birthday.

He died with Covid-19 in February 2021, shortly after he was knighted by the Queen.

Madeleine Budd of Kedlestone Avenue was arrested in London on Sunday 2 October.

Derbyshire Police charged her on Monday with criminal damage to a war memorial to the value of £200.

She appeared at Westminster Magistrates Court today, where she pleaded guilty.

Prosecutor Jordan Pratt told the court: “This offence lasted for a short amount of time, it is only 30 seconds in length but the impact of this offence is substantial.”

He continued: “This is an abhorrent act. I do not need to remind the court of the impact that Sir Tom had.

“He was a figurehead that a number of people rallied around in a fundraising effort that raised tens of millions of pounds in the height of the pandemic.”

In posts from the End UK Private Jets campaign group, Budd was quoted as saying: “Every time a private jet takes off, we pour a bucket of sh*t and blood on everything captain Tom stood for.”

Budd was remanded in custody until her hearing on 25 October. 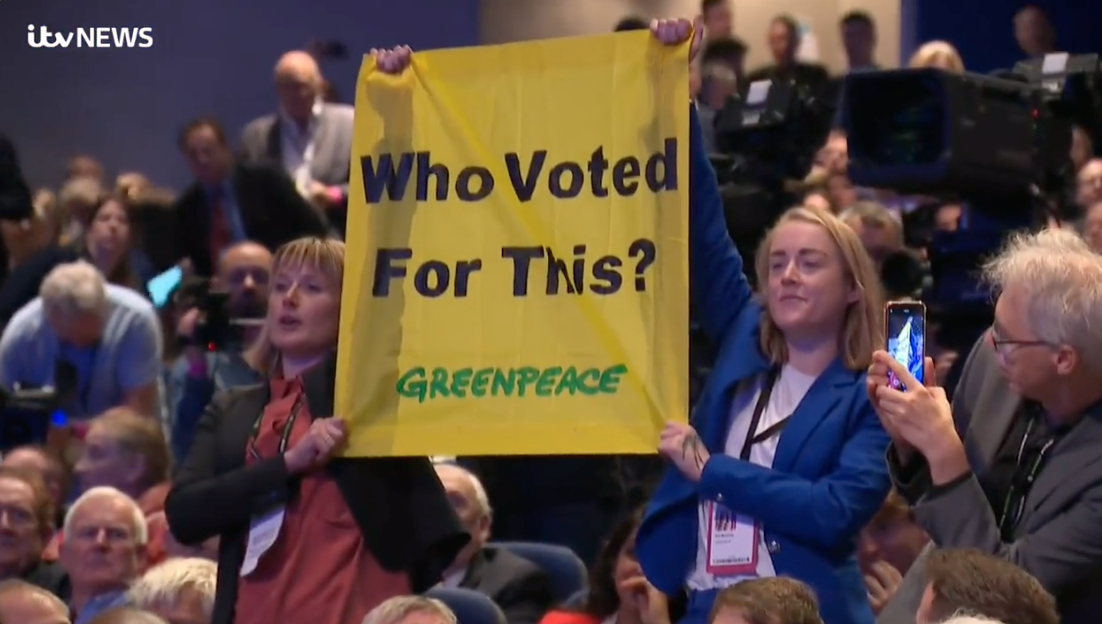 Two protestors who snuck into the Conservative Party Conference in Birmingham managed to interrupt Prime Minister Liz Truss‘ speech by shouting “who voted for this?”

Derailing the PM’s closing speech after just a couple of minutes, the two Greenpeace demonstrators held up signs asking the same question, citing issues like fracking and other environmental issues.

As you can see, their comments are ultimately drowned out by the noise of Tory boos and chants of “out, out!”. They also produce a second sign after the first is ripped out of their hands by an attendee.

Always bring a back up.

It is unknown under what pretence the protestors were able to infiltrate the conference’s closing event in Birmingham but they both appeared to have official lanyards, one of which can be seen being ripped from the woman in blue’s neck as she was quickly escorted from the premises.

Nevertheless, they have received the support of many such as former Green Party leader Caroline Lucas who tweeted: “Great to see @greenpeace in Tory party conference asking who voted for this?

“They’re right – nobody voted for more fracking, tearing up nature protections or the £ in free fall. We need a general election now.”

She also went on to state that the PM “won’t find it so easy to remove the huge number of opponents [to] her climate-wrecking, nature-destroying policies right across the country”.

You can see the incident from another angle here as those in the audience continue to chant before giving Truss a standing ovation and shout “go on Liz!”

The fledgling Prime Minister went on to joke: “Later on in my speech I’m going to talk about the anti-growth coalition. I think they arrived in the hall a bit too early”.

Jokes aside, pressure has been growing on the Conservatives and Liz Truss ever since she took office, especially following Kwasi Kwarteng’s controversial mini-budget.

It was received so poorly, in fact, that they’ve already committed a number of U-turns on the likes of the proposed tax cuts — something the Prime Minister insists she “absolutely no shame” about.

It remains unclear whether the two individuals have been charged on any grounds following their disturbance.