A life-sized snow globe is coming to Manchester this weekend 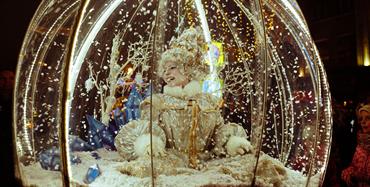 Stilt walking reindeer, a life-sized snow globe and giant Scandinavian puppets will all appear in Manchester this weekend as the city starts to get warmed up for Christmas.

All popping up as part of Manchester’s first-ever First Day of Christmas event, the city will be taken over by a magical line-up of over 50 festive characters for one day only – welcoming in festive cheer on every corner.

Taking place on Saturday 13 November, the event will follow the official opening of Manchester’s Christmas Markets and mark the first weekend of full-on Christmas shopping in the city.

Transporting visitors to a winter wonderland right in the centre of town, illuminations, festive characters and live music will fill the streets with the sounds of Christmas, helped along by the warming tones of a live brass band.

Scandinavian puppets will roam Exchange Square as puppet Aurora and her Arctic Fox entertain families of all ages as part of an enchanting performance organised by Global Grooves.

Elsewhere, stilt-walking reindeer will make their way into the city centre whilst at the Royal Exchange Manchester, you can meet some real-life Ice Queens.

You can also check out a life-sized Snow Globe at St Ann’s Square, join the Penguin Family and Crumpet the Elf on their hunt for the north pole, and catch performers from the Winter Circus where Market Street meets Deansgate.

Families can also get in the festive mood with live brass music in the afternoon with Bloco Brass Band. Then in the evening, SPARK! Band is lined up to perform what is being billed as a “one of a kind Christmas Music Show.”

The characters will be roaming across various locations in the city centre including Exchange Square, Market Street, St Ann’s Square King Street, Cross Street and Deansgate.

To find out more, you can visit the event’s website here.