This new, independent market is creating community and supporting local businesses in Ancoats. 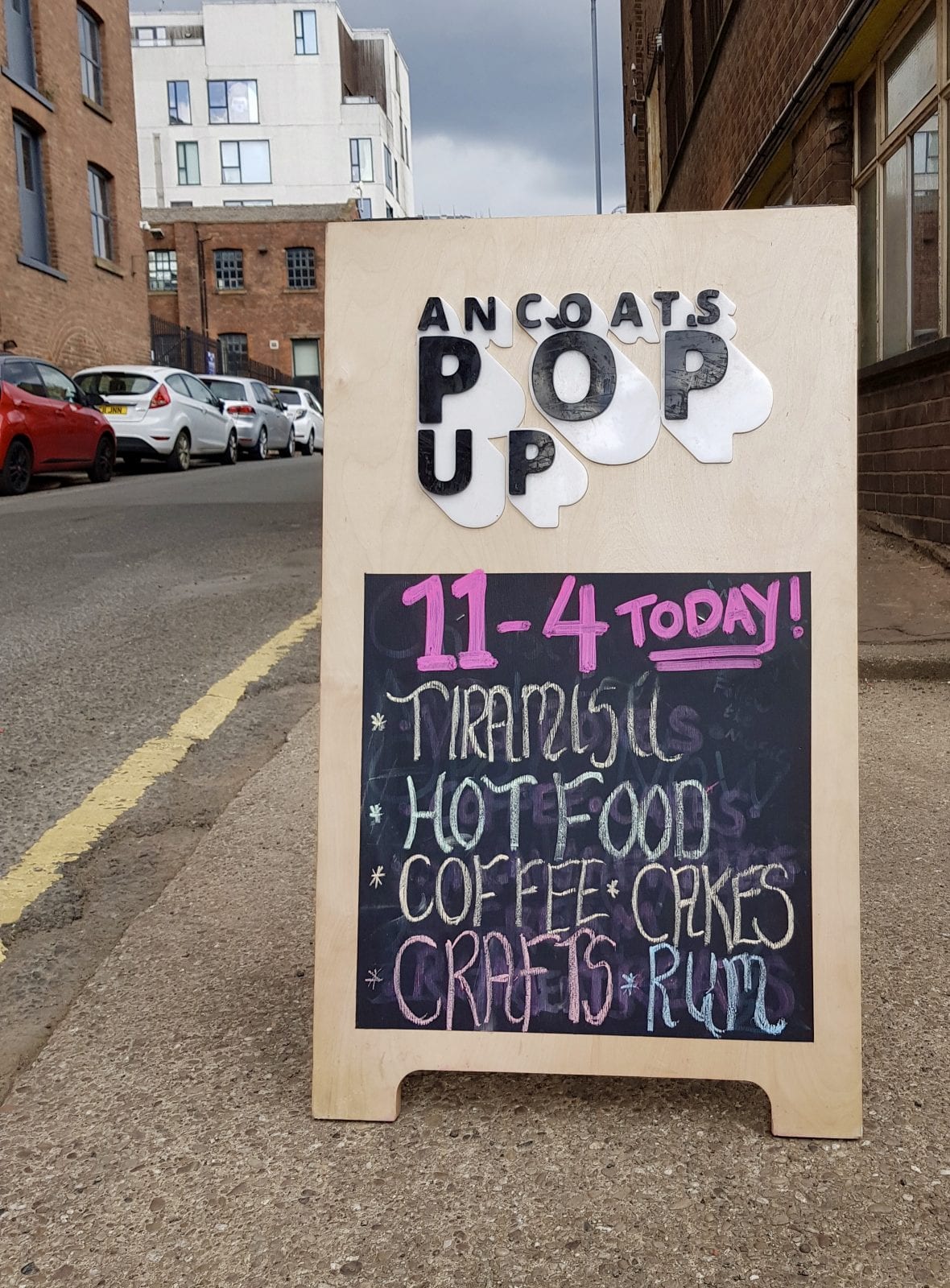 The threat of rain was barely dampening the studious preparation from the seven or eight stall holders in Ancoats on Saturday – several of whom were setting up for their first ever market day.

The business owners had all gathered for the latest edition of the ‘Ancoats Pop Up’ – which has become a word-of-mouth and social media hit in recent weeks.

Every weekend, queues snake up Radium Street to an array of high-quality food, drink, homeware and skincare stands set up by local people in the community.

Kat Brown, Ancoats Pop Up’s manager, told me over the phone that the focus is all on supporting local makers.

“I went to the market once and I loved it,” Kat said.

“I had the idea of making this beautiful, community led, independent opportunity, a place where people could attempt to get their weekly shop without shopping in a big corporation or supermarket.”

The market itself is tiny – a former garage that just about fits four tables along each wall. But the close proximity of Ancoats Pop Up is also its greatest asset; making for an intimate atmosphere with conversation and interaction, as well as the chance for a real look at what’s on offer (making those freshly-baked brownies and sourdough breads appear particularly tempting).

It’s growing all the time, too. On the market’s open day, there were only four stalls. Now, there are at least eight – with different stallholders pitching up every week.

Dominic runs Allons-y (“let’s go” in French), which sells speciality coffee and natural wine and has been a regular at Ancoats Pop Up since it started a couple of months ago.

“Because Ancoats is its own little village in a way, people have come back every week,” Dominic said.

“People would come in to grab a coffee and their veg box. It’s that kind of tight-knit closeness, which has been really nice to see.”

There’s a real community among stallholders themselves, even if they’ve only met that morning.

Many of the makers live locally, and it was lovely to overhear the recognition of “Oh, you work there? But I live there!” echo between the tables as people set up their wares.

For several of the stallholders I chatted to, it was their first time not just at Ancoats Pop Up, but at any market.

The cost of a stall for the day at many markets can be well over £100, Kat told me. At Ancoats Pop Up, they charge £40 and don’t take any of the stallholders’ profits from the day’s trading.

“There’s no agenda behind the market,” Kat said.

“We’re all just pretty chilled, we’re not trying to make a million pounds out of this, we’re just trying to make a nice thing. We’re passionate about all the things that people have made themselves. It’s not a market where you just churn things out.”

The market celebrates sustainability and is as eco-friendly as possible.

Alexa, who runs Alexa Weaves, makes macramé rainbows for nurseries out of recycled cotton, linen and sari silk from India. Studio Dawn, run by Chelsie, makes macramé home décor, including plant hangers, wall hangings and lamps. Both Alexa and Chelsie have the same supplier, which provides them with recycled material.

Local sourcing is also important. For cold press drinks company Fruition, all the fruit for their drinks is sourced from McCall’s organics on Church Street, with labels printed locally.

There’s also the delicious-looking Batard – a microbakery that sells freshly-baked sourdough, croissants, steak bakes and other treats. Dorothy, one half of the business, said: “The vibe we’re going for is kind of like Gregg’s, but instead of mass production in factories, we’re taking it back and making it contemporary and fresh.”

As we come out of lockdown, Kat has plans to the develop the market into a true social space. “In the long run we want to be able to get some seats and maybe even a DJ to make it a more social event,” she said.

But the market isn’t exclusive to Ancoats residents or creatives, she emphasises. It’s for everyone.

“Manchester as a whole is quite a big community, and I feel like that’s the thing that I love about Manchester: even though it’s a big city, it does feel like everyone will go out of their way to help each other out.”

Ancoats Pop Up market is open from 11am-4pm every Saturday at 26 Radium Street.