A “gift from the pasta gods”, focaccia sandwiches and a new pop-up restaurant in the KAMPUS bungalow.

It’s another great week for eating and drinking out in Manchester, with a host of new pop-ups, one-off events and new dishes to be getting stuck into.

Dare we say it – but there seems to be a general feeling of optimism in hospitality right now.

Launch parties are finally being thrown, residencies are being announced, and nature – as the meme goes – is finally healing.

Keep reading to discover our top food and drink picks for the week.

A hidden bar takeover with natty wine and french fries

Natural wine hustlers Vin De Bodega team up with Amsterdam-inspired Fry By this week – taking over the small cocktail bar hidden underneath The Corner Boy, formerly known as Double Down, for a night of top-tier natty wine and loaded fries.

Wines, all handpicked favourites of the Vin De Bodega team, will be available by the glass or the bottle – as well as fries from upstairs, loaded with your choice of over 50 different flavour combinations. There will also be a special portion of fries available on the night to enjoy with a paired wine.

Find them underneath The Corner Boy, Stevenson Square this Thursday 12 August from 5 pm.

“A gift from the pasta Gods” at Sugo

Such is the excitement around Sugo, a single new dish is more than enough to have us shouting from the rooftops.

Described by the team as “a gift from the pasta Gods,’ the new Paccheri all’ Amatriciana is a simple classic based on guanciale (cured pork cheek), pecorino romano cheese, white wine and datterini tomatoes. To be enjoyed with “at least” half a litre ofBarbera on the side, it looks and sounds absolutely divine.

A new pop-up restaurant in the KAMPUS bungalow

Fine dining fans, this one is for you.

Tine, the restaurant project by chefs Josh Shanahan and James Lord, is popping up in the KAMPUS bungalow with some gorgeous seasonally-inspired dishes until the end of September starting this Friday.

Calling on experience at Mana, Where The Light Gets In and Manchester House, the pair plan on serving a 5-course set menu of British flavours with their signature umami twist. Find them cooking up a storm on Thursday to Sunday evenings right through to the end of next month.

The lads are also working with Le Social Wine (KAMPUS’s other residents right now) to curate a wine list in tandem with bottles from their own cellar, so expect some really special pairings on the side.

If you’d like to try a chippy tea with a twist, Roti in Chorlton has to be the spot. It opened just before the pandemic so hasn’t been given the shine it should – but we’re here to fix that.

That said, it’s the take on fish and chips that’s got us really excited. Made with fresh Panga fried in Roti gram flour batter, it’s then served with fluffy masala potatoes and curried chickpea ‘mushy peas.’ Enjoy with an Irn-Bru cocktail and for the ultimate naughty treat finish with a deep-fried Mars bar.

Not busy enough with two kitchens on the go and the launch of a new packaged meal service in South Manchester, Lazy Tony’s has just added two new focaccia sandwiches to the menu to coincide with the fact that they’re now open for lunch as well as dinner at Radium Street.

They’re currently taking classic requests for this weekend – we see someone’s put ‘lasagne sandwich’ in the comments already, which we’re completely here for. 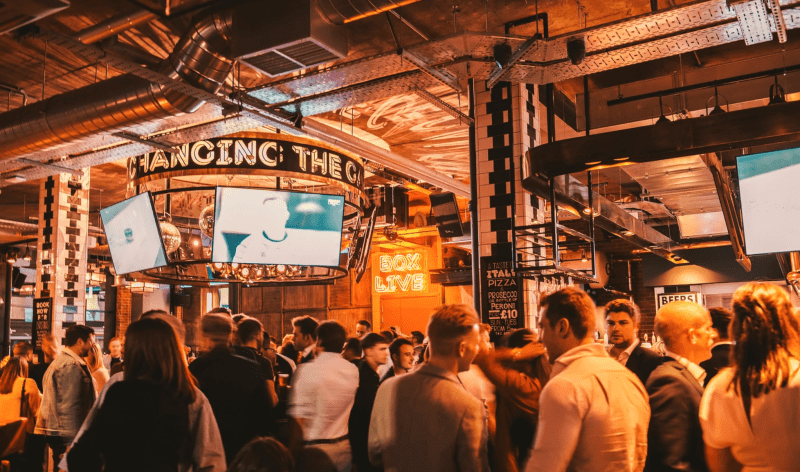 BOX is aiming to bring the city a new spot to eat, drink, watch live sport, play and party all under one roof.
byEmily Sergeant Who's ready for some "steins, brines, and good times"?
byEmily Sergeant