The new note features many odes to the codebreaker's achievements. 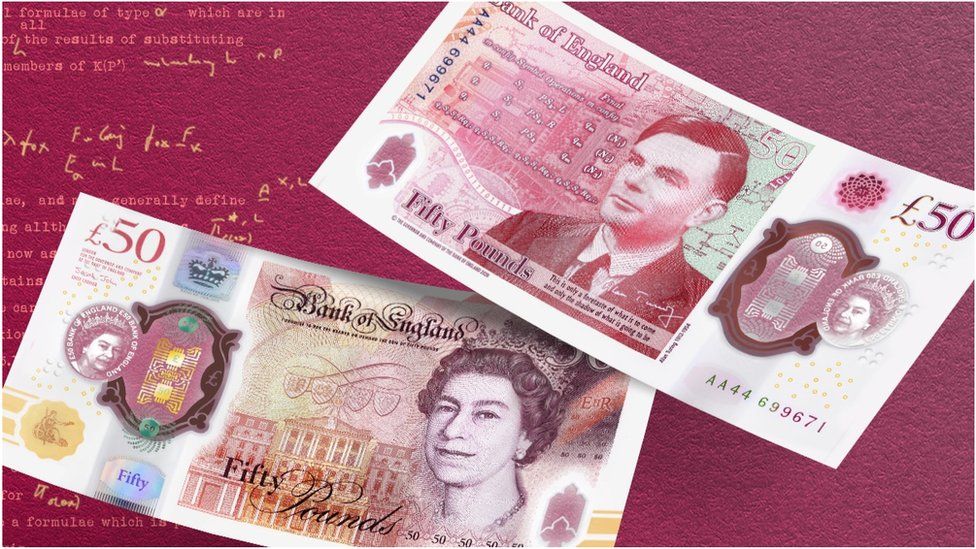 The new Alan Turing £50 note is set to enter circulation on the codebreaker’s birthday, the Bank of England has revealed.

The banknote – which features a photo of Turing taken in 1951, along with his signature and several odes to his achievements – will appear from June 23.

Turing’s birth date in binary code is also included on the design, as well as mathematical formulae from a paper he wrote in 1936.

A quote he gave to the press in 1949 also appears: “This is only a foretaste of what is to come, and only the shadow of what is going to be.”

Old £50 notes will still be accepted for some time.

In honour of Turing – whose lauded codebreaking work at Bletchley Park during WWII helped to turn the tide in favour of the Allies – Britain’s intelligence agency GCHQ has launched what it describes as its “toughest puzzle yet.”

The ‘Turing Challenge’ is a set of 12 puzzles based on the unique design elements of the £50 banknote, such as the technical drawings for the British Bombe – the machine designed by Turing to break Enigma-enciphered messages during WWII.

Director GCHQ Jeremy Fleming said: “Alan Turing’s appearance on the £50 note is a landmark moment in our history.

“Not only is it a celebration of his scientific genius which helped to shorten the war and influence the technology we still use today, it also confirms his status as one of the most iconic LGBT+ figures in the world.

“Turing was embraced for his brilliance and persecuted for being gay. His legacy is a reminder of the value of embracing all aspects of diversity, but also the work we still need to do to become truly inclusive.”

Turing is also regarded as a father of modern technology – having helped to develop the Manchester computers.

In 1952, he was found guilty of indecency over his relationship with another man he met on Oxford Road and was required to undergo treatment to reduce his libido.

A memorial to Turing was unveiled in Sackville Park in 2001.

The school of mathematics building at the University of Manchester also bears his name.

The “Alan Turing law” is now an informal term for 2017 legislation that retroactively pardoned men cautioned or convicted for homosexual acts.