"If it wasn’t for the CAR-T treatment at The Christie, neither of us would be here now." 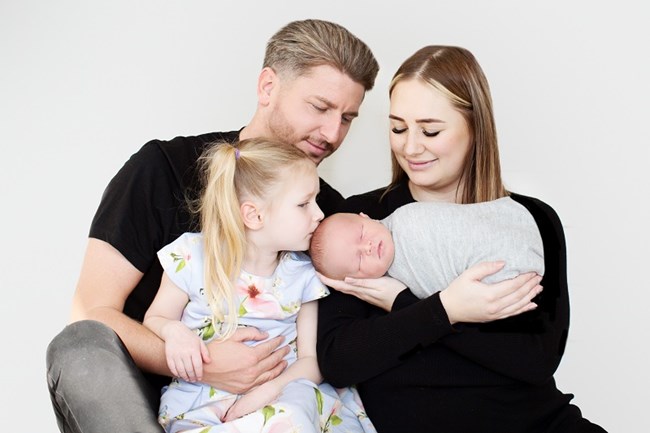 A young mum who received lifesaving cancer treatment in Manchester has welcomed a “miracle” baby after fearing she may be infertile.

26-year-old Sammy Gray nearly died from cancer three years ago not long after welcoming her first child, but after receiving pioneering CAR-T therapy to save her life at The Christie NHS Foundation Trust in Manchester, she has welcomed her second child and is believed to be one of the first patients in the UK to give birth following the innovative treatment that “cleared her body of cancer”.

Sammy said that if it wasn’t for the treatment and expert care she received at The Christie, “neither of us would be here now.”

Back in January 2018, shortly after Sammy had her first daughter Harper, she began to experience chest pains and night sweats that doctors initially thought could have been due to a blood clot related to the birth, but they later discovered a mass on her chest, which lead to a devastating diagnosis of non Hodgkin’s lymphoma – a type of cancer that develops in the lymphatic system.

Sammy, then just 21, sadly “missed out on motherhood” as she underwent a range of chemotherapy and radiotherapy treatments, which were initially shrinking the tumour.

But the cancer unfortunately became more aggressive and progressed.

By June 2019, when faced with a very poor prognosis, Sammy’s only remaining option was CAR-T therapy – a new treatment only approved by the NHS in 2018 that involves reprogramming the patient’s own immune cells, called T cells, which are then used to recognise and destroy their cancer.

Sammy underwent the gruelling therapy back in September 2019 – which involved her having to spend weeks in hospital while her body’s own immune system attacked the cancer, and unfortunately made her very ill in the process.

“It has been an incredibly tough few years and I missed out on so much of my first taste of motherhood when Harper was a baby as the chemotherapy made me very ill, so I couldn’t look after my baby daughter, and Daley, my fiancé, had to be a full-time dad.”

Thankfully though, the treatment was successful, and her scans at three, six, and 12 months were all clear and showed no signs of cancer.

Although, Sammy then faced a different challenge.

Doctors warned that the chemotherapy could have resulted in early menopause, meaning she may not be able to have more children, and after not having periods for a year, she did fear she’d become infertile – but as Sammy and her partner desperately wanted a second child to complete their family, she was approved by the NHS for IVF fertility treatment.

The couple had just started the process when they conceived naturally, and two and half years after she endured the CAR-T treatment, the couple welcomed their baby son, Walter, back in February.

“I’m determined to make the most of every minute with Walter,” Sammy continued.

“The sleepless nights don’t bother me at all, and I appreciate all the little things. I’m enjoying the time with him that cancer stole with Harper. Walter is our little miracle.

“If it wasn’t for the CAR-T treatment at The Christie, neither of us would be here now.”

“CAR-T therapy is a relatively new treatment for some aggressive blood cancers, where the patient’s immune cells are ‘trained’ to fight the cancer, [and] Sammy was one of our first CAR-T patients, and at that time the youngest.

“The treatment saved her life and it’s fantastic that she remains in remission and has had a baby.

“We all wish her and her family all the best for the future.”