"I feel myself again and I’m able to enjoy life." 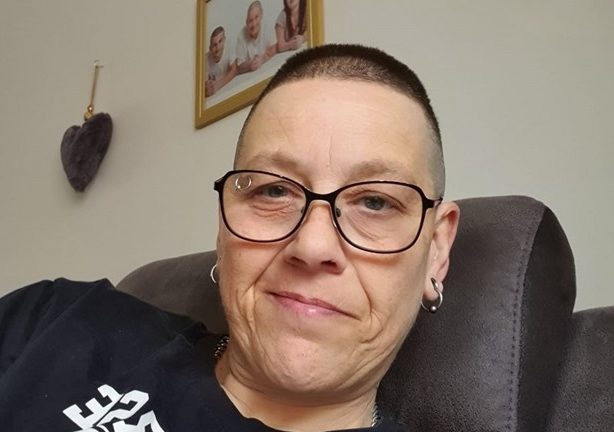 A clinical trials patient in Manchester is celebrating a new lease of life after having had “a remarkable response” to a new specific gene-targeting treatment that controls how cancer grows.

49-year-old Terri Hurdman, from Bromsgrove in Worcestershire, found out she had advanced bowel cancer on Valentine’s Day two years ago, and didn’t even think she’d make it past Christmas 2021 after finding herself left completely exhausted and out of breath from simple tasks such as climbing the stairs, walking a short distance, or even talking on the phone due to her cancer.

But within hours of trialling a new drug at The Christie NHS Foundation Trust, she was climbing stairs with no effort.

After three months, scans showed her tumours had halved in size.

Terri – who has three children and six grandchildren – was a previously fit and healthy factory worker used to doing manual work for a firm producing medical supplies, and had no symptoms until she got stomach ache and thought it might be IBS – but after having been referred by her GP to Kidderminster hospital, she was diagnosed with stage 4 colorectal cancer, which had spread to her lungs, and started chemotherapy a month later.

After three types of chemotherapy didn’t work, she was told she had no other options and was taken off the drugs.

By August 2021, Terri had become very ill, had lost a stone and a half in weight, and was becoming weaker, so she was forced to use a wheelchair to get out and about, but luckily, her consultant at Kidderminster hospital knew The Christie in Manchester was running early phase clinical trials which used targeted therapies – a type of cancer treatment that targets the genes and proteins that control how cancer cells grow and spread – and referred her to see if the trial would be suitable.

Terri’s DNA had already been analysed as part of standard NHS testing, and it was found she had a mutation in the KRAS gene of her cancer.

Fortunately, the new international clinical trial was designed specifically for people with the gene mutation that Terri has, so she passed the screening and was recruited onto the trial, and immediately after taking the first dose of the tablets last October, her condition “improved significantly”, specialists at The Christie said.

So much so, Terri was able to walk up some stairs without getting out of breath for the first time in months.

“It’s like a miracle. It really is a wonder drug as within days, I didn’t need to use the wheelchair at all, and I didn’t get out of breath climbing stairs, which would have previously led to a coughing fit,” Terri explained.

“That day, I spoke to my sister on the phone for an hour, something that would have wiped me out before, and my appetite came back, which made me look so much healthier, and the colour returned to my cheeks.

“I didn’t think I’d make it to Christmas, but now I’m looking forward to celebrating my 50th birthday in July.

“I feel myself again and I’m able to enjoy life.”