Six officers were injured during the demonstrations at Old Trafford, with one video of an officer appearing to strike someone on the ground being referred to the GMP Standards Branch. 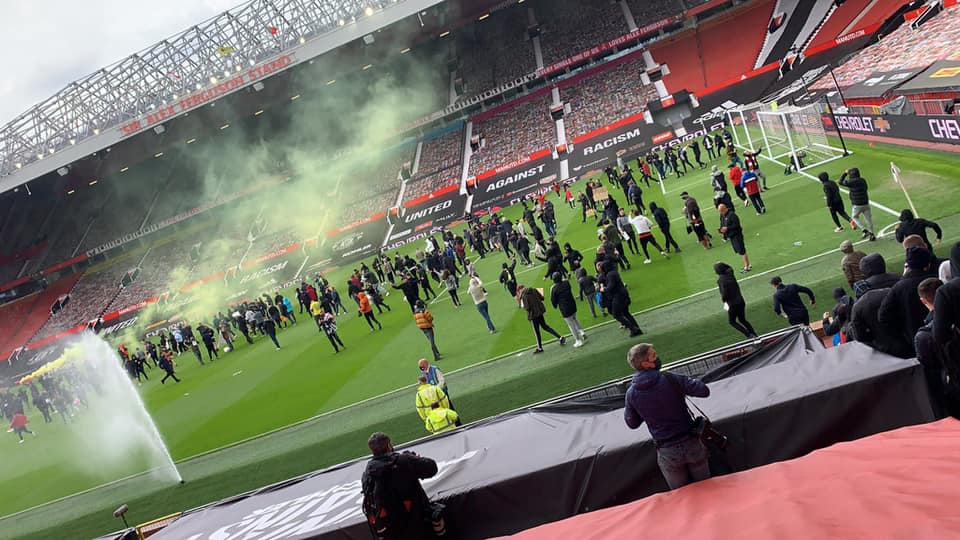 Greater Manchester Police has launched an investigation into the ‘violent disorder’ at Old Trafford over the weekend – which culminated in multiple injuries, one arrest, and a video of officer conduct being referred for an internal review.

Over 1,000 fans attended Manchester United’s stadium on Sunday (May 2) ahead of the Premier League fixture with Liverpool as part of a demonstration against the club’s owners – with hundreds more gathering outside the Lowry Hotel.

Some supporters managed to break into Old Trafford itself and get onto the pitch.

The game was ultimately postponed.

Various protests have been held against the Glazer owners since the American family took full control of Man Utd in 2005. Sunday’s demonstration had been organised in response to the club’s proposed participation in the much-maligned – and now defunct – European Super League.

Some parts of Sunday’s demonstrations proceeded peacefully – with supporters groups hailing a “victory“.

But later in the day, a series of ensuing scuffles resulted in six police officers being injured after being “met with hostility”.

GMP said that “flares were let off and bottles and barriers were thrown at police and horses.”

He added: “Officers were just trying to do their job and facilitate a peaceful protest, however a number of those present became hostile and aggressive towards officers and forced entry to the football grounds, making it very clear that this protest was not peaceful and ruining it for the majority of protesters who had not intended for the protest to become violent.”

One officer suffered a fractured eye socket in the disorder, whereas another “sustained a wound to his face following bottles and cans being thrown from the crowd”. Another officer was reportedly “dragged and kicked”.

Police say that a 28-year-old man has been arrested as a consequence of the investigation into the protests.

A video has also appeared on social media which appears to show an officer striking an individual on the ground after dragging them behind a police van.

According to the MEN, the footage was recorded by the team hotel and occurred after some supporters had been blocking vehicles on the nearby road.

GMP released a statement in reference to the footage that reads: “We are aware of a video circulating online of officers making an arrest during a protest today (2 May) near The Lowry Hotel.

“The video depicts officers arresting a 28-year-old male on suspicion of a theft from a motor vehicle and a public order offence. He currently remains in custody for questioning.

“GMP’s Professional Standards Branch has been made aware of the video and will be examining the footage and all available evidence to understand the full circumstances surrounding the arrest.”

Prime Minister Boris Johnson has also spoken out regarding the protests, telling reporters: “I don’t think it’s a good idea to have disruptive behaviour, demonstrations of that kind.

“But on the other hand, I do understand people’s strength of feeling.

“And I think that it’s a good thing that we have been able to do things that make it pretty clear that the European Super League is not going to be appreciated by the people of this country, or by this Government.”

GMP is also appealing for any footage from the event itself as the investigation continues.