Images have been released for the first phase of plans put forward by Manchester City Council and FEC. 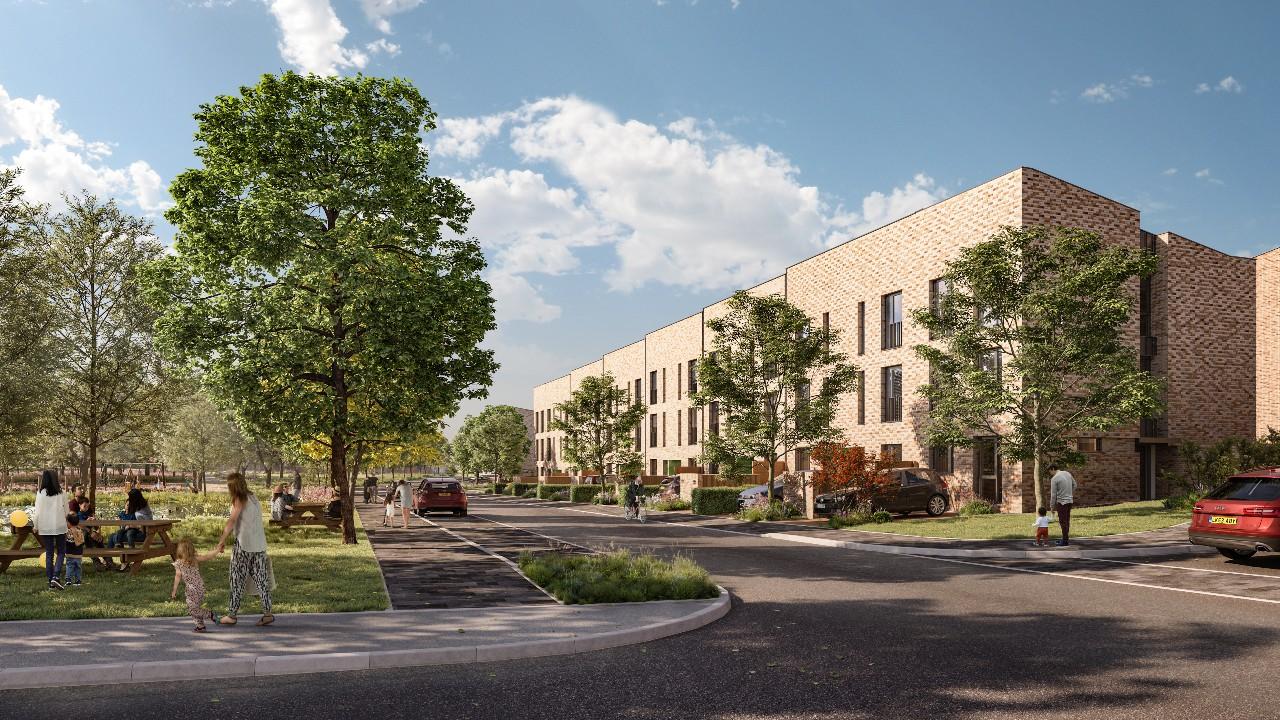 Manchester City Council and Far East Consortium (FEC) have submitted plans for the first phase of the regeneration of Collyhurst Village.

The proposals – which represent the first major regeneration of the area in 50 years – feature 244 new homes, comprising a mix of town houses and apartments, including 100 homes for social rent, and a new 1.3 hectare public park.

The diverse range of homes is intended to cater for a mix of families, young professionals and older residents, as the joint venture looks to create a sustainable neighbourhood for current and future generations.

As part of the Collyhurst Village proposals, the first phase of New Collyhurst Park will deliver a new public green space for Manchester, with more than 450 trees expected to be planted as part of a network of green links to the surrounding village, and according to Manchester City Council, the masterplan for the area also includes almost 2,000 sq ft of neighbourhood-focused commercial and retail space, as the joint venture partnership looks to “improve community assets and provide new inclusive public realm spaces for residents”.

The planning application – which has been submitted to Manchester City Council’s Planning & Highways Committee – follows a three-phased public consultation delivered by FEC in 2020.

More than 2,500 people – including local residents – took part across both physical and digital consultations, with the first phase of plans said to “reflect local appetite for increased connectivity, green space and the continued celebration of Collyhurst’s identity and heritage”.

Responses to the consultation overwhelmingly supported the proposals, with respondents equally positive that they met the needs of the community in Collyhurst.

The proposals represent part of the first phase of the Strategic Regeneration Framework for Manchester City Council and FEC’s redevelopment of parts of North Manchester – other neighbourhoods involved in the first phase of development include Red Bank and New Cross – which is aiming to deliver up to 15,000 new homes, while rejuvenating disused land over the next 15 years.

And detailed proposals for a second scheme to be delivered within neighbouring South Collyhurst – one of the seven neighbourhoods to be developed as part of the overall Framework – are expected later this year.

Initial developments across the two neighbourhoods are expected to deliver 130 new affordable homes.

Speaking on the plans submitted and the release of the first computer-generated images to coincide with this, Cllr Suzanne Richards – Executive Member for Housing and Regeneration at Manchester City Council – said: “Submitting the first planning application for Collyhurst Village is a landmark moment for local people and represents the beginning of the end of a long journey for residents in the area who have been waiting for this investment in their community.

“The Northern Gateway project is hugely exciting for Manchester.

“Given the economic impact of the coronavirus (COVID-19) pandemic on our towns and cities, the continuation of this investment is encouraging as a marker of confidence that our city will recover and thrive once COVID is behind us.”

She also thanked everyone who took part in the consultation last year.

“The number of responses was brilliant and input from the people who live in the area has provided invaluable insight to help guide the principles of development” she added.

Victoria Hunter – Development Manager at FEC – also added: “Over the past 12 months, we’ve seen the overriding importance of tight-knit communities, and the role access to high quality homes, sustainable community assets and green space have to play in facilitating them.

“Working with and for the people of Collyhurst, who have informed this application, it’s our ambition to deliver a vibrant and inclusive neighbourhood that has unique and lasting appeal for both existing and new residents.

“In doing so, we plan to champion the area’s heritage and its residents as part of the wider regeneration framework, improving connections to the city while celebrating Collyhurst’s iconic red sandstone which forms the fabric of Manchester as we know it.”

Work is expected to begin on the Collyhurst Regeneration this summer, with delivery scheduled for completion in summer 2024.