Sergio Aguero’s ’93:20′ title-winning shirt to be sold at auction next week

The iconic No.16 Manchester City shirt is being auctioned off to raise worthy funds for charity. 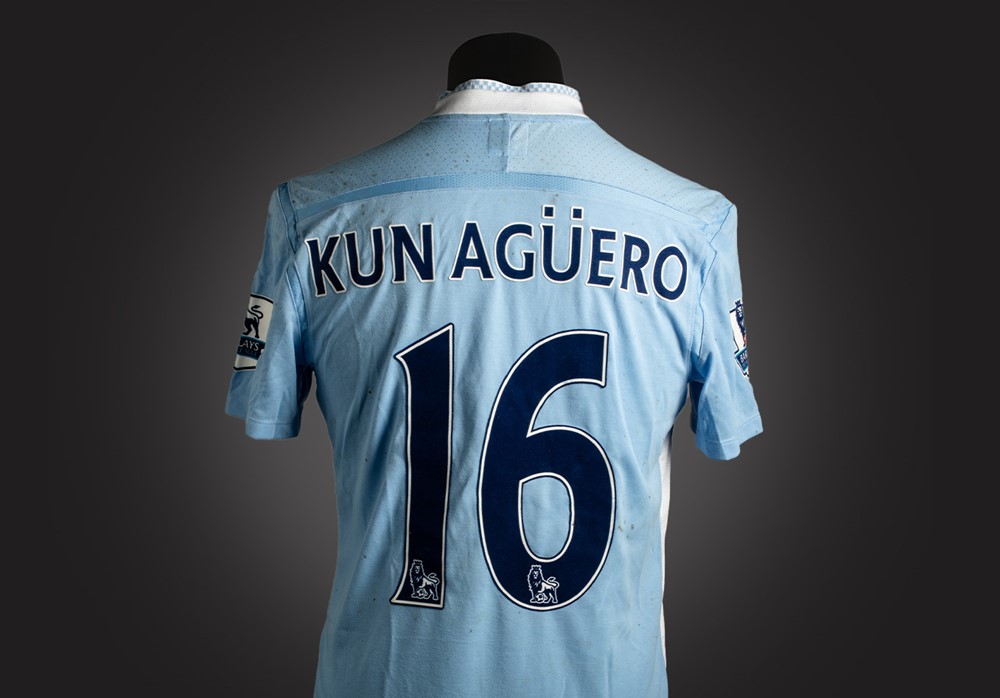 The shirt worn by former Manchester City striker Sergio Aguero when he scored the goal that clinched the club’s first league title in 44 years is to be sold at auction next week.

The historic Manchester City No.16 jersey worn the Argentine footballer – who played for the sky blues from 2011-2021 – when he scored the unbelievable winning goal v Queen’s Park Rangers in the fourth minute of extra-time at the Etihad Stadium in 2012 is being auctioned off to raise worthy funds for charity.

The shirt is set to go to auction exactly a decade after the iconic ’93:30′ moment – which has gone down in sporting history as one of the most dramatic winning goals of all time.

Although, experts at GBA expect it could sell for more than £46,000.

GBA chief executive Adam Gascoigne said the shirt represented “one of the most important pieces in the history of the Premier League”.

The shirt being sold at auction comes after the striker himself – who won 15 major trophies in 10 years with Manchester City, and is the fourth-highest scoring player in Premier League history, with 184 goals in 275 games to his name – recently unveiled a statue marking the tenth anniversary of the goal.

The enormous striking steel sculpture – which has been created by celebrated artist Andy Scott – has been installed pride of place outside the Etihad Stadium, and was officially unveiled to the public last Friday.

Aguero – who retired in December 2021 for health reasons – described the historic title-winning goal as “the best moment of my life”.

The shirt is being sold by Neville Evans, who owns the National Football Shirt Collection.

Mr Evans said in his Letter of Provenance that the shirt had come to him completely by chance, thanks to the forgetfulness of Aguero’s then-teammate, Mario Balotelli.

He said that when Manchester City’s players returned to the dressing room after being presented with the Premier League trophy on the pitch, Balotelli asked the Argentine for his shirt as a souvenir and Aguero agreed, so the Italian striker put the shirt in his kit bag, alongside a commemorative T-shirt, the shirt he had received in a swap with QPR’s Taye Taiwo and his playing shorts, but “then left the stadium without his bag”.

The shirt was found the following day and sent to the club’s training ground, but Balotelli never claimed it, and so it was gifted to the National Football Shirt Collection.

Mr Evans said he “never had any intention” of selling the shirt previously, but has decided to put it up for auction now as he wanted to support his collection’s curator – who was “requiring ongoing critical medical care”.

Profits from the shirt sale will to Testicular Cancer UK and the Stroke Association.

The shirt will go under the hammer on Tuesday 24 May, and you can find more information about the listing on the Graham Budd Auctions (GBA) website here.