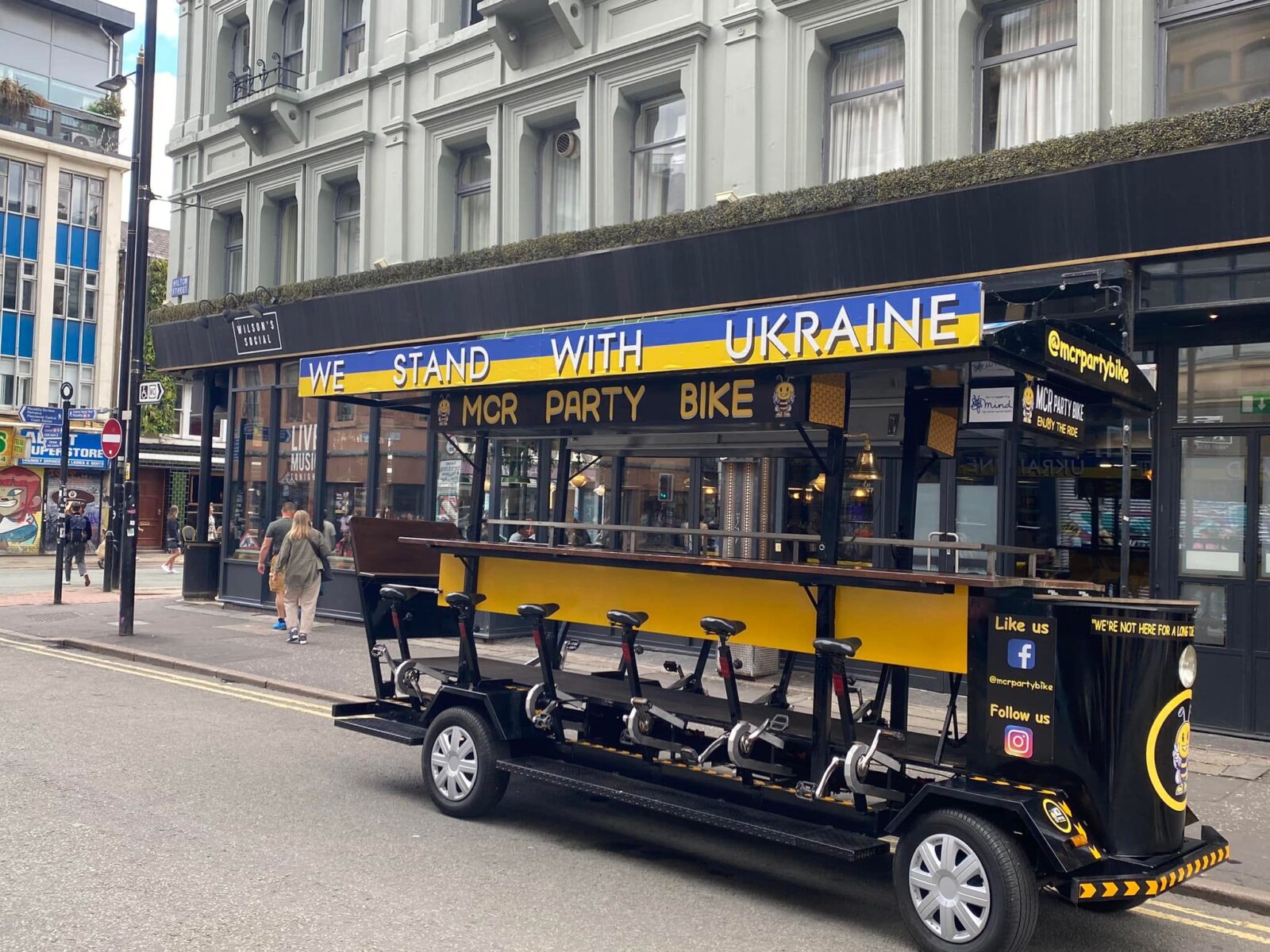 There’s.a new ‘party bike’ experience in Manchester that gives punters the chance to pedal themselves about the Northern Quarter whilst sipping on ‘BYO’ pints.

Known as the MCR Party Bike, the bee-emblazoned contraption has been shipped over from Europe and can seat up to 12 people at a time.

It requires a minimum of six people to get it moving and is already proving to be something of a bargain day out, as pedallers are even able to bring along their own booze to save some money.

Launched by two local lads who previously ran bars over in Majorca, Stuart Smith, 51, from Monton, and Shane Steenson, 33, from Mossley, came up with the idea after paying a trip out to Dublin where Shane’s cousin runs something similar

Having invested a lot of time and money into adapting the bike, they’ve finally managed to get it out on the road – and despite only being out and about for a couple of weekends, it’s already caused quite the stir amongst city-dwellers.

Whilst the duo are in talks with local Northern Quarter businesses about collaborating to offer takeaway drinks, for now, no such deal has been arranged – meaning that bikers can hop on with their own booze for the low-low price of £10 per person.

As the pair both have other jobs, the MCR Party Bike is a weekend-only affair. Running every Saturday from 1 to 9pm, bookings run at hourley intervals. Walk-ups are also welcome, provided the bike isn’t too busy.

The route starts at Hilton Street and then loops around the Northern Quarter, taking around 30-40 minutes in total.

Speaking on their new venture, the pair told the Manchester Evening News they’ve had a great reception so far: “We’ve only been out a few weekends and you wouldn’t believe the reaction we get.

“It doesn’t fly along, it just trundles along, and even if we’ve got a bus behind us, you’ll see people stopping and taking photos.

“We’ve put a big sticker on the back saying ‘smile and wave to the party bike’ and people just do. They love it, it’s all good fun.

“It was a good laugh this weekend, we’re still buzzing about it. It’s unbelievable when we drive through Stevenson Square it’s like we’ve won the Oscars or something the amount of people taking photos and videos.”

To find out more about the MCR Party Bike, visit the Facebook page here.