Sustainability and the high street regeneration is said to be at the heart of the masterplan for the "ambitious" project. 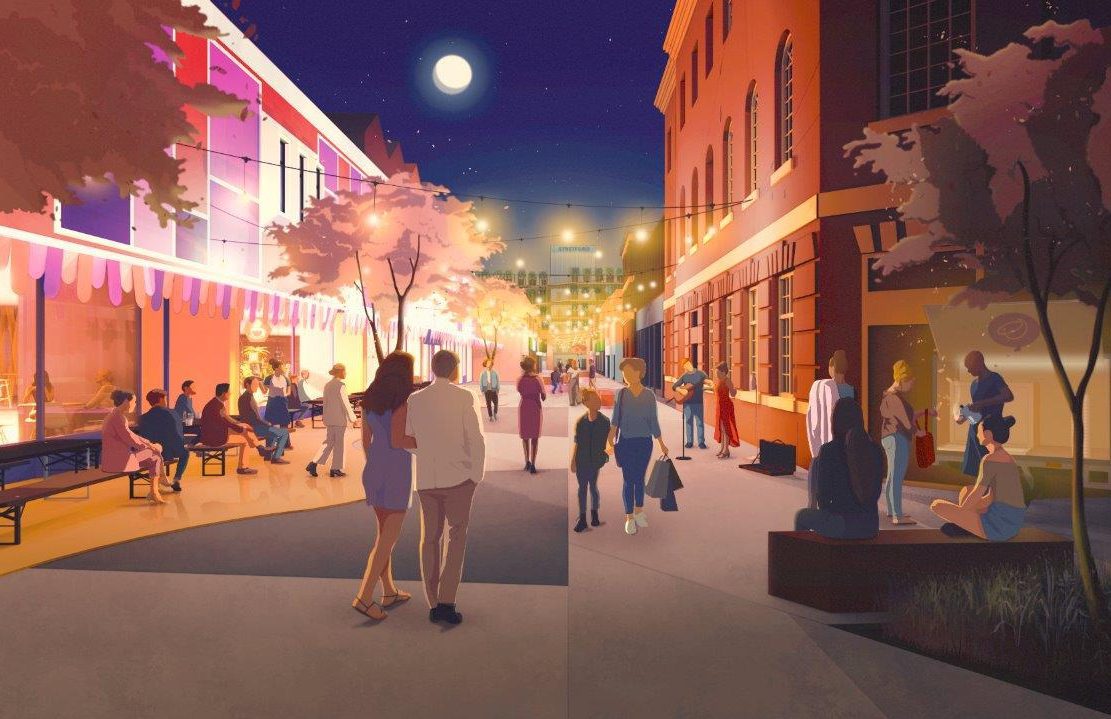 It’s been confirmed that Trafford Council and developers Bruntwood have been given the green light to commence the “ambitious” town centre regeneration project in Stretford.

After the multi-million pound outline planning application was submitted at the end of 2021, following what was said to have been an “extensive period” of consultation with the local community, these approved plans are intended to set the parameters for future redevelopment, Trafford Council says.

New places to play, work, eat, shop, and live are to provided in Stretford town centre as part of the wider Stretford Masterplan and the Area Action Plan (AAP).

According to the Council and Bruntwood, there are also further proposals to provide up to 800 homes around Stretford Mall, St Matthews Church, and Lacy Street car park – which will include affordable housing and bring much-needed new homes to the area.

Sustainability and the high street regeneration is said to be at the heart of the masterplan.

The plans centre around creating people-friendly spaces and new pedestrian routes into and around the town centre with the intention of “enhancing the flow of footfall around the area”, and creating more green meeting areas with public squares and open spaces, including a green biodiversity corridor and ‘Central Park’ at the heart of the town centre, through to a much-improved Bridgewater Canal waterside experience.

With the aim of boosting the local evening economy, according to Trafford Council and Bruntwood, the new market hall will create a home for retailers, eateries, and bars, with outdoor seating spilling out into a new south-facing community space, which will feature a covered shopping area.

Speaking on the approval of the plans, Cllr Andrew Western – Leader of Trafford Council – said: “The planning approval is a huge milestone for Trafford Council as we can now start work to redevelop the town centre for the whole community to enjoy.

“The Stretford Masterplan is a huge moment in our long-term collaborative partnership, and it’s a pleasure to work towards a shared vision and goals with Bruntwood and the local community who were involved every step of the way.

Read more: The Stretford Mall and town centre transformation masterplan has been unveiled

“These exciting plans will significantly improve connectivity, create valuable green and open spaces, and special places for people to gather and interact, [and] with the high street at the centre of the plans, the masterplan will also help attract local independent businesses and exciting retail and hospitality brands, while hugely enhancing the lives of residents and visitors. We are very proud to be giving this incredible scheme the green light.”

Bruntwood is known for having a track record in town centre regenerations.

The company says its purpose of “creating thriving cities” recognises the need for continuous investment in the town centres that surround them to help each other succeed, and the focus of its work around reviving town centres is ensuring “social, economic, and environmental sustainability”, and creating a space that is “dynamic, inspirational, and futureproof.”

The aim of these reinvigorated town centres, according to Bruntwood, is to evolve collaboration between residents and businesses to create “inclusive and social hubs that add vibrancy to the whole community.”

Andrea George – Town Centre and Consumer Brands Director at Bruntwood – added: “Undertaking such an extensive consultation period with the local community allowed us to create a masterplan that provides for the people of Stretford and its surrounding areas, so we are very pleased that it has been given approval allowing us to start the process of breathing new life into the town centre.

“Through these plans, the high street will become the beating heart of the town and create a dynamic and entrepreneurial district that promotes collaboration and community.

“It’s fantastic to have achieved this milestone.

“We can now move ahead with our plans and start delivering a positive evolution of Stretford for its people.”