The Embassy Village will provide up to 40 new, permanent modular homes made from repurposed shipping containers. 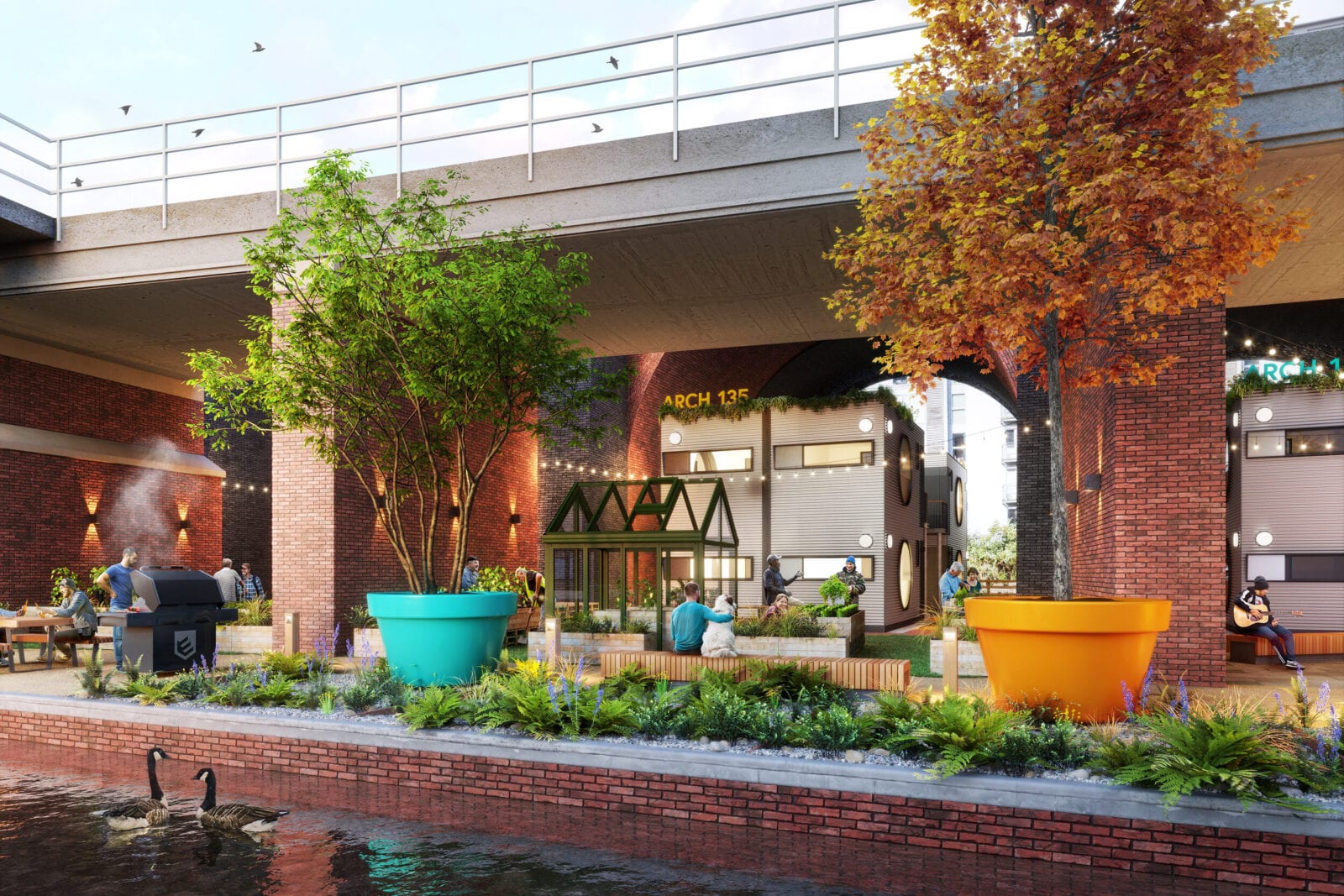 Plans to transform shipping containers into a new modular home village for rough-sleepers have been submitted to Manchester City Council this week.

Following public consultation, Embassy – which is supported by Peel L&P and CAPITAL&CENTRIC – is planning a new community to help the city’s homeless and vulnerable get back on their feet.

It’s set to be the first initiative of its kind in the UK.

The Embassy Village will provide up to 40 permanent modular homes made from repurposed shipping containers on a self-contained, currently-derelict site below the railway arches between the Bridgewater Canal and River Irwell.

It will provide ‘safe and secure’ accommodation for those who are homeless, or are at risk of being homeless, with in-house start-to-end support, and routes into work.

The Embassy Village will also include a Village Hall – a community hub, training and mentoring facility for residents – as well as communal outdoor space with plenty of greenery, a multi use sports area, space to grow vegetables, and external eating and socialising areas.

The charity’s team of re-settlement workers and volunteers will provide wrap-around support of at least six hours per week, per resident, to equip them with a range of life skills designed to help residents “unpack past traumas” and “grow in confidence”.

The self-contained site will be managed 24/7 by Embassy’s experienced team.

Speaking on the submitted plans, Sid Williams – Founder of Embassy – said: “The big need in Manchester is to find a way to cut the time it takes for an individual to move on from homelessness.

“Last year, we housed a chap who had spent seven years going from shelter to shelter waiting for council housing to come up [so] Embassy Village will help reduce the burden on the council’s housing waiting list and end people’s homelessness on the day they arrive.

“As residents will be renting their Embassy Village homes, we also hope to instil a strong sense of empowerment from day one.

“Embassy Village is being specifically designed as a zero-tolerance drug and alcohol consumption community [and] critically, we train our residents to manage their money and home and support them into full-time employment with a wide range of Manchester based, full-time employers [which] means most people leave us to live in normal rental accommodation without the need for benefits thereafter.

“Our brilliant team continue to support our residents with aftercare visits and mentoring in the months after they move on to their next chapter, helping to keep them on an even keel as they reintegrate back into society”.

Councillor Lee-Ann Igbon – ward member for Hulme – added: “After consultation with councillors and residents with full details of the proposed accommodation, l support the Embassy proposed homeless housing in an under used site on the edge of the canal in the St Georges area.”

“In a city that struggles to offer homes this unique opportunity enables a place of security, advice and rebuilding of vulnerable adults.

“The high quality accommodation will be supported by measures including job opportunities, mental health support and training in life skills in stylish accommodation in an independent, well-lit environment with on-site support.

“[Embassy Village] will work in partnership with Manchester City Council and others in the city, and bring a new chapter for those living in their new homes”.

You can find more information via the Embassy Village website.