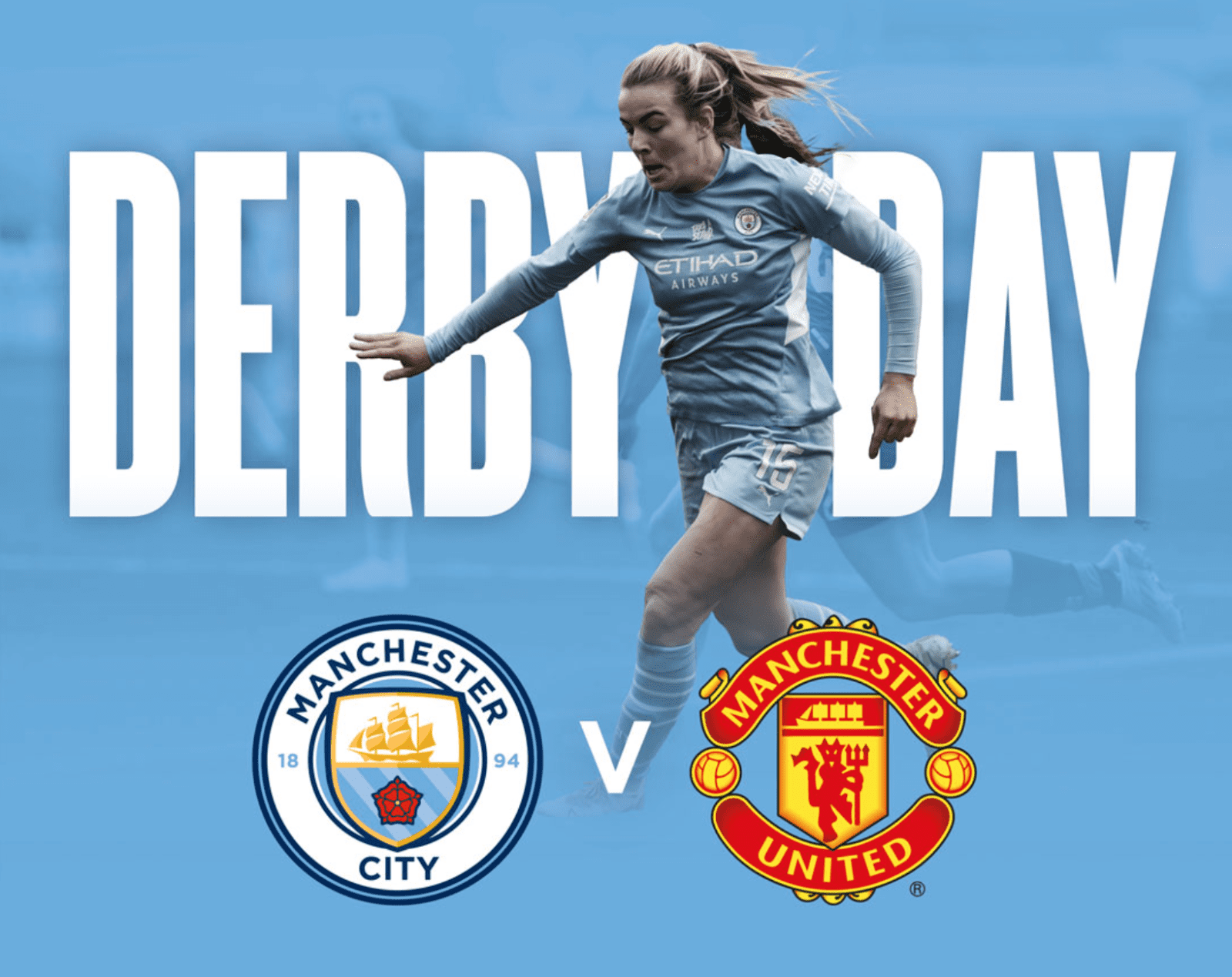 There’s only five days to go before people take to their seats for the Barclays FA Women’s Super League Manchester derby, and it’s fair to say that this is a pretty special one.

It’s true that derby matches are always known for having that extra competitive edge.

No matter the city, no matter the competition, and no matter what’s at stake, if you ask any player or fan, a derby is undoubtedly one of the biggest matches in the football events calendar, and even though the want to win games is what drives clubs all season long, there’s just something about a derby victory that’s a little bit sweeter than the others.

In a city that’s as football-obsessed as Manchester, a derby win is the chance to claim some bragging rights, the chance to feel a sense of pride in the shirt you’re wearing, and crucially, the chance to paint the city red or blue.

The history of the women’s Manchester derby may only date back a couple of years, but there’s been no shortage of memorable moments – and this one looks set to be the same.

After COVID-19 restrictions forced stadiums across the world to fall silent from March 2020, this upcoming derby is the first to be held at Manchester City Women’s home ground of the Academy Stadium where fans will be allowed inside – but when is the derby, what time does it kick-off, how do you grab tickets, and what are the players saying ahead of the match?

We’ve rounded up everything you need to know before the big day.

When is it, and what time is kick-off?

There’s really not long to wait now, as the Barclays FA Women’s Super League Manchester derby is happening on Sunday 13 February 2022, and it’ll be the ninth time the two heavy-hitting teams have faced each other.

The match will be kicking-off just after midday at 12:30pm GMT.

Where is it taking place?

This derby will be taking place at City’s home ground of the Academy Stadium.

The stadium is a part of the wider, state-of-the-art, 80-acre training facility known as the Etihad Campus in East Manchester.

Situated only 400 metres from the City of Manchester – or ‘the Etihad’ – Stadium, the Academy Stadium is linked to the mother ground via a 190-metre bridge across the intersection of Ashton New Road and Alan Turing Way.

How do you get there?

The Academy Stadium is easily-accessible, and there’s plenty of ways to get there.

Supporters can park in the Blue Car Park (M11 3DU) free of charge for Women’s games.

Accessible parking is available onsite at the Academy Stadium in the North car park – which needs to be pre-booked in advance by contacting [email protected] before each game – and a resident parking scheme is in place in the streets around, which is strictly enforced and identified through on-street signage.

There are also a number of satellite car parks around the stadium, although Manchester City does not endorse these.

According to the official Manchester City website, it will take approximately 30-minutes to walk to the Academy Stadium from the city centre, and there is a safe, well lit, and signposted walking route available from Manchester Piccadilly Station if you follow the ‘City Link’ signs.

If you’re looking to get there by bus, then there are bus stops adjacent to the stadium, and the stop is the Asda superstore opposite the North Gate entrance.

There’s also a number of bike racks around the stadium too.

Metrolink runs from the city centre, including Manchester Piccadilly station to the Velopark stop and on towards Ashton, and the journey time from Piccadilly Station takes 12-minutes.

Journeys to the stadium are really easy from the many Park & Ride sites on the Metrolink network, and parking is free for Metrolink passengers, with the journey time to the stadium is approximately 25-minutes.

You can find more information about getting to the stadium via the Manchester City website.

What are the players saying?

Ahead of the Manchester derby, The Manc got the chance to sit down with Manchester City Women forward Ellen White to chat about all things City, her time at the club so far, the best advice she’s ever been given, life outside the world of football, and most importantly, how she’s feeling about the biggest game of the season.

“I think one of the most exciting things for us is to be playing at home and having our fans there to support us back in the stadium,” White explains.

“As much as we want everyone to stay safe and we understand why we couldn’t have fans in the stadium, for us, they really give us an extra edge and they give us energy, so it’s really special to have them back and to feel closer to them.”

“We just want them to enjoy it.”

She continued: “A derby day’s always feisty, it’s always competitive, and I think both sets of fans and staff understand what’s at stake because of the rivalry – but for us, we want Manchester to be blue, so that’s our priority.”

“We’re not underestimating this derby, so it’ll be a really exciting one for us.”

You can read the interview in full here.

Where can you get tickets, and how much do they cost?

Tickets for the Barclays FA Women’s Super League Manchester Derby on Sunday 13 February 2022 are available from £8 for adults and from £3 for Under 16’s, and you can also grab Hospitality Tickets – which include a padded seat located on the halfway line, a three-course meal, and access to the cash bar – from £72 too.

Manchester City said they are selling fast and are expecting a packed crowd for the game.

You can grab tickets from the Manchester City website here.

What can you expect on matchday?

Fans heading to the Academy Stadium on the day of the derby can expect everything from dedicated fanzones, and the chance to ‘meet the Moonies’ – City’s much-loved mascots, Moonchester and Moonbeam – as well as DJs playing lots of live music, and free hot / soft drinks included in ticket prices.

Is it being shown on TV?

As the 2021-22 season is the first WSL campaign to have games shown on network free-to-air TV as part of a landmark broadcast deal, fans who aren’t able to make it to the game on Sunday will be able to watch it live on the BBC.

The match will be shown on both BBC Two and on BBC iPlayer.