FA Cup football at Fallowfield Stadium was much like the Tower Challenge at Owens Park - wrong-headed, dangerous and pretty disastrous all round. 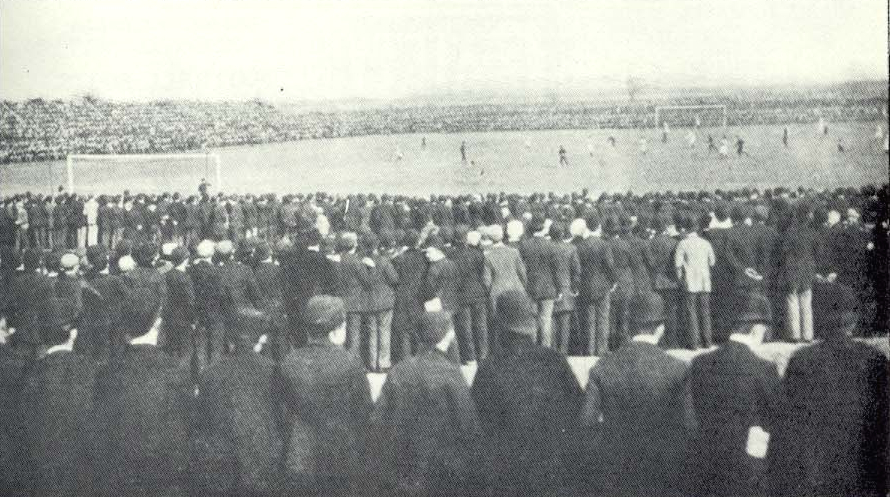 Every September, crowds of nervous freshers – many feasting their eyes on Fallowfield for the first time – can be seen lugging boxes of pots and pans into Owens Park, nodding nervously at their potential new flatmates in the corridors.

This ageing student accommodation block has been a staple of Manchester University since the sixties.

During that time, it’s housed thousands of students. But it’s also been the site of one of the city’s notorious competitions: The Tower Challenge.

Within days, or maybe even, hours, of moving into Owens Park, many students decide to enrol in the infamous contest, which involves scampering from floor to floor as fast you can whilst gulping down a shot of alcohol on each level (16 in total).

The outcome is never pretty. But Fallowfield is used to that. This patch of land was hosting chaotic competitions long before the students moved in.

Over 100 years ago, Fallowfield had its very own stadium – and in 1893 it was chosen as the venue for the FA Cup Final.

On paper, hosting such an occasion is a proud feat for the Manchester suburb. But in reality, FA Cup football at Fallowfield Stadium was much like the Tower Challenge – wrong-headed, dangerous and pretty disastrous all round.

Fallowfield Stadium was constructed in 1892 – built with terraces, a pavilion and a single stand, with a running track around the outskirts.

According to historian Simon Inglis – the author of the excellent ‘Played In Manchester’ – it could fit about 15,000 fans “at most.”

Opened by Manchester Athletic Club, Fallowfield Stadium quickly settled into its role as a major sports venue – and within a year the FA had selected the ground as the site for football’s biggest game: The FA Cup final.

Everton and Wolverhampton Wanderers arrived in Manchester to compete for the prestigious trophy on 25 March 1893. And so did tens of thousands of others.

The official attendance that day – 45,000 – put the crowd at three times the stadium’s capacity. Although other reports suggest there might have been as many as 60,000 in the ground on the day.

The overcrowding, unsurprisingly, created problems right from the off – with the sheer volume of spectators leading to a kick-off delay.

Given the largely flat structure at Fallowfield, many struggled to get a good view of the game, stirring a restlessness that saw the crowd spill over onto the playing surface.

The teams had to restrict football to the middle of the pitch for fear of tumbling over spectators’ feet, and when the final whistle went to signal a 1-0 victory for Wolves, Everton angrily declared the environment was not fit for a competitive match.

They had a strong argument, but their demand for a rematch fell on deaf ears.

Despite the trouble that day, Wolves have fonder memories of Fallowfield Stadium.

Over at their own ground, Molineux, the Midlands club have a corporate hospitality suite named the ‘Fallowfield Lounge’ – paying testament to the location in which they lifted the FA Cup for the first time.

An England vs Scotland rugby game took place at the ground in 1897, along with two Northern Union Challenge Cup rugby league finals in 1899 and 1900.

In fact, the British football body decided to give the ground another big fixture in 1899 – the FA Cup Semi-Final between Sheffield United and Liverpool.

The pair came into the tie deadlocked, having drawn 2-2 in their first game and 4-4 in the replay.

A second replay was scheduled at Fallowfield Stadium, and following two enthralling encounters, demand to see the Semi was high.

But no lessons had been learned.

The crowd on this occasion was so big a crush ensued, leading to the game being abandoned with Liverpool up 1-0 at the time.

The second replay was instead moved to Derby County’s Baseball Ground, where Sheff Utd won 1-0 – and then went on to thump Derby themselves 4-1 in the final at Crystal Palace two weeks later.

It is unconfirmed as to whether there were any major injuries in the failed Semi-Final in Manchester, but the debacle put an end to elite football in Fallowfield regardless.

Instead, the stadium found its niche as a spot for athletics and cycling – used regularly by The Manchester Wheelers.

Student footballers also toughed it out on the turf, but as the surroundings began to deteriorate, the university gobbled up the ground.

Pro cycling ended in 1974, and after a few more years of amateur use, Fallowfield Stadium was demolished in 1994.

In its place, a brand new set of student halls was built: Richmond Park.

Today, the area is ripe for a fresh burst of development.

The rumours are that close neighbour Owens Park – and its Tower Challenge – will also be gone forever in due course (although plans for renovation have been plagued by postponements).

Still, with Fallowfield’s fascinatingly bizarre history as a contest venue, you can’t help but wonder what sort of topsy-turvy tournament might come next…