It's all to celebrate the annual Manchester Jazz Festival (mjf), which is arriving in our city on Friday 20 - Sunday 29 May 2022. 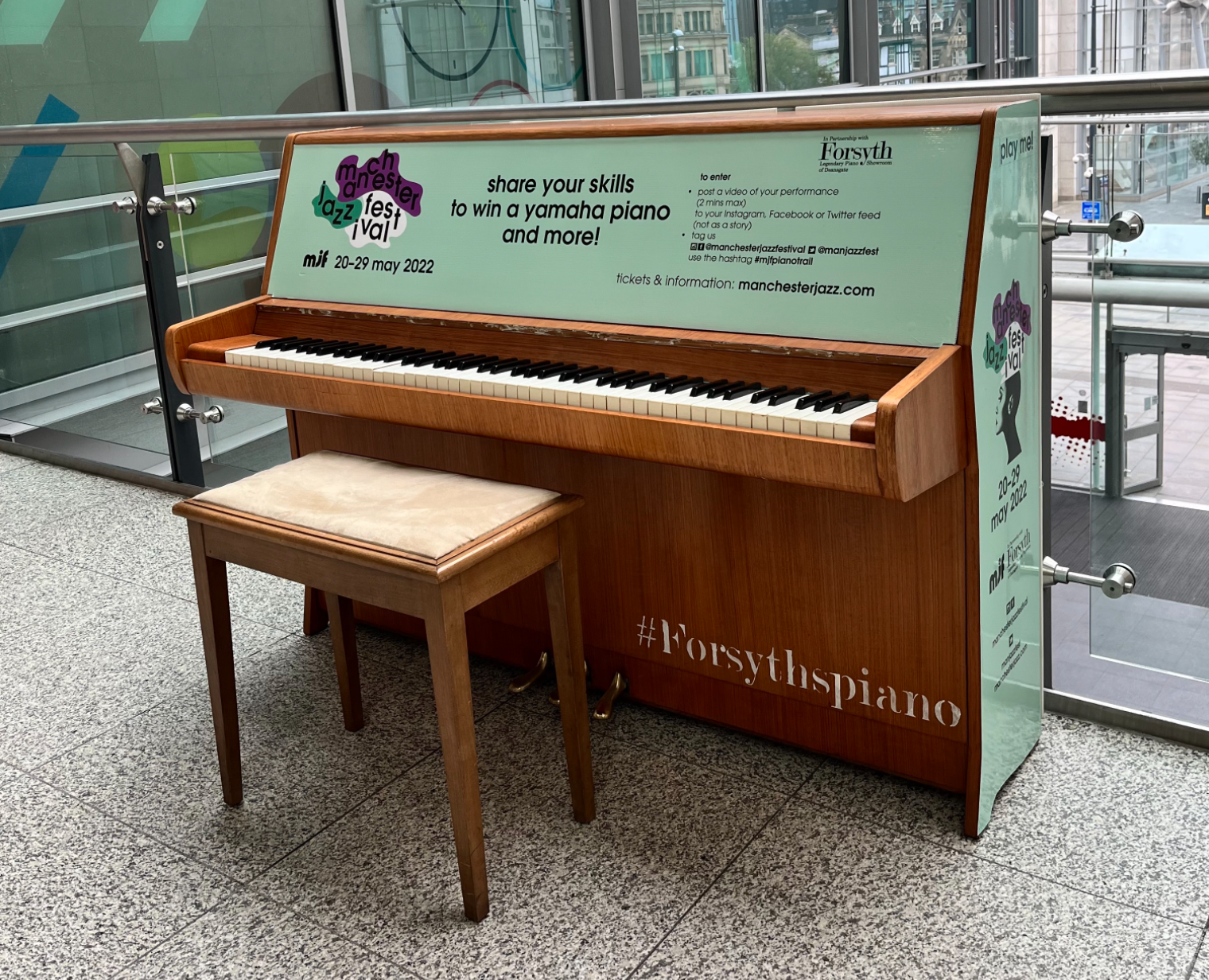 13 street pianos have been dotted around popular Manchester locations, and they’re free for the public to play all month.

The annual Manchester Jazz Festival (mjf) is arriving in our city on Friday 20 – Sunday 29 May, and to properly celebrate the 2022 edition in style, festival organisers have teamed up with the beloved Forsyth Music Shop to place over a dozen pianos at well-known sites in the hunt for Manchester’s most entertaining street pianist.

You don’t even need any technical talent or formal training either, as the competition is open to everyone from concert pianists, to the occasional ivory tickler.

If you haven’t spotted any of the pianos yet, then make sure to keep your eyes peeled across the city centre as they’re located at Manchester Arndale, The Corn Exchange, Forsyth Music Shop, Great Northern, Harvey Nichols, Royal Exchange Arcade, Manchester Art Gallery, Manchester Central Library, Manchester Piccadilly Station, and Manchester Victoria Station.

A little further afield, pianos have also been placed at Spinningfields, Quayside in MediaCityUK, and even at the Trafford Centre.

All 13 of the pianos are now available for passers-by to play, but for those who think they can give Elton John or Billy Joel a good run for their money, then there’s a whole raft of prizes up for grabs too.

Some of the prizes you can get your hands on in the limited-time-only competition include a Yamaha P-45B piano, a return ticket for two anywhere on the Northern Rail Network, a gift package and vouchers worth over £100 from MediaCityUK, an afternoon tea for two at 20 Stories, £30 Wagamama vouchers for each prize winner, and so much more.

Speaking on the mjf Piano Trial, Emma Loat – Manager of Forsyth’s Music – said: “For many years, we’ve had a street piano at the front of the Forsyth’s shop on Deansgate, so we know that Manchester and the surrounding areas is full of talented musicians and those willing to have a go [and] we’re really excited to supply 13 pianos for the mjf piano trail.

“We’d urge all those budding performers to come forward, have a go, and be in with a chance of winning some fantastic prizes.”

To be in with a chance to be named one of Manchester’s best street pianists, all you’ll need to do is find one of the pianos in the trail, take a short video of your performance, and post the video to your Instagram, Facebook, or Twitter account tagging in @manchesterjazzfestival / @manjazzfest and using the hashtag #mjfpianotrail.

At the end of the piano trail, mjf and Forsyth’s will pick nine lucky winners based on who showed the most “creativity, ingenuity, and gave the best performances”.