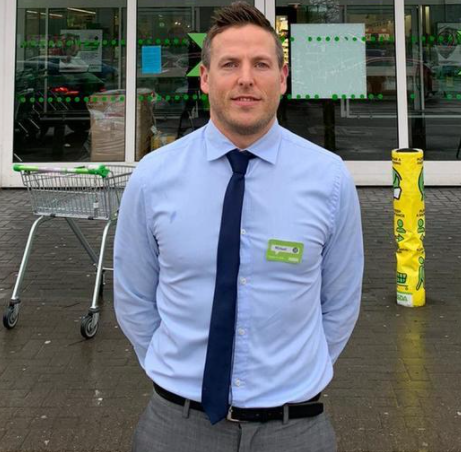 A local ASDA employee has been hailed a “hero” in a viral post after helping to save the sight of an elderly shopper following a routine eye test.

Michael Stokes – who has worked as an Ophthalmologist the ASDA Eastlands superstore for 18 years – has received a Customer Service Award after immediately referring 75-year-old Eileen Mansell for further examination after he picked up warning signs that he wasn’t happy about when she attended a routine eye appointment.

Michael referred Eileen to Arrowsmiths Opticians in Manchester for a second opinion.

A scan later revealed that a blockage to a cataract in her right eye had caused the pressure to build up to a potentially serious level, and Eileen was then sent to the Royal Eye Hospital, where she underwent an emergency operation.

Explaining the sight-saving situation, Michael said: “I saw her for a routine eye test as there was a history of glaucoma in the family.

“She didn’t have have classic symptoms or pain or anything and wasn’t complaining of any issues, but I noticed a few things that had started to change since her last eye test. The pressure in one eye had gone up quite a lot and this made me want to delve into it a bit deeper.

“I really thought this needed to be looked into further.

“Eileen came in afterwards to see me and said the hospital had told her that if it had been left any longer then she could have lost her sight.”

Chadderton resident and great-grandmother Eileen – who has been one of Michael’s customers for the past eight years – said: “I’m so grateful to Michael.

“I really can’t thank him enough [and] he is such a treasure for ASDA to have.

“I just went in for a routine eye test as I had no symptoms at all [but] thankfully, Michael spotted what he did otherwise I could have lost the sight in my eye – and having your sight is such a precious thing.”

A post sharing Michael’s success on ASDA’s official social media platforms this past weekend has since seen him go viral after it amassed over 13K interactions, shares and positive comments from members of the East Manchester community and beyond.

Lisa Casey – Customer Trading Manager at ASDA Eastlands, who nominated Michael for the Customer Service Award – said: “Afterwards, Eileen came in and she was so over the moon. She was just so happy with the service from Michael [and] through his due diligence, he potentially saved her from losing her sight.

“We are all dead proud of Michael.

“He is a really nice, approachable, friendly guy, and a valued member of the team.”