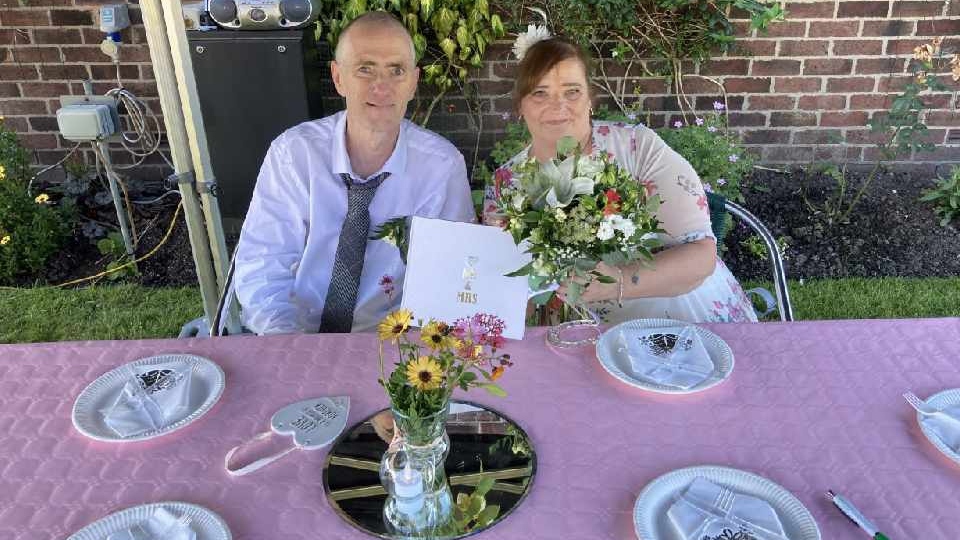 A Chadderton couple who overcame a number of hurdles have proved that nothing gets in the way of true love by finally tying the knot in a special service at a local hospice.

The pair have been together for 11 years – five of which they have been engaged after they met in their local pub, the Colliers Arms – and they became a happy couple thanks to the keen matchmaking skills of both their friends.

The hospice managed to organise the couple’s ceremony within 72 hours to make their wedding dreams come true after various obstacles, including a last-minute postponement, got in the way.

Donna thought she’d ticked all the boxes when she’d arranged to marry Mark Davis – who has been receiving pain management at Dr Kershaw’s Hospice – but when she first turned up for her big day, which she’d planned with the registrar that very morning, she was told that Mark was on strong pain relief, was not fit enough for the ceremony, and that he would prefer to wait to properly mark the occasion the following week.

Understandably emotional and disappointed, thinking “he didn’t want to marry me”, Donna walked away ready to plan the day again.

Second time round though, she had another worry that the latest local lockdown restrictions would mean they would have to choose between family and friends to keep it to the rule of six, however with help from the hospice staff who contacted Oldham Council, they confirmed that current COVID-19 regulations for weddings state that 20 people are able to attend, as long as it was outside and social distancing measures were observed.

All that prior disappointment soon changed when the couple finally married just a few days later surrounded by their close family and friends.

Those unable to attend the service also watched via a live stream link monitored by staff nurse, Chloe.

Speaking about the service, Donna said: “It was such a magical day. Words can’t even describe the feeling, we can’t thank all the staff at Dr Kershaw’s enough for organising it for us and making it so special.”

Mark added that the staff at the hospice had been fantastic in their care for him: “I’ve been looked after so well since being here. The staff at Kershaw’s have been brilliant and have bent over backwards to help me and to make our day so special,”

Hospice Nurse Beth – who has been caring for Mark – said: “Mark and Donna’s wedding day was a true example of what Dr Kershaw’s is all about, making patient’s wishes come true no matter how big or small.

“It was amazing to see how many people came together to pull off their special day, from the nurses and doctors, to the events team, maintenance team, florist, bakery and even our very own Dr Kershaw’s shop who kindly lent our nurses fascinators so staff could look the part.

“I was privileged to be able to get so involved and to make it a day Mark and Donna could cherish forever, especially after being engaged for five years”.

From everyone here at The Manc, we wish Donna and Mark a lifetime of happiness.