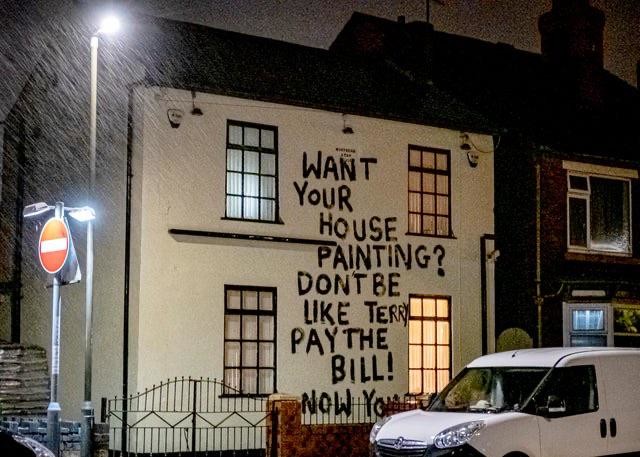 A pissed off painter and decorator who claims he is owed £500 by a customer went viral yesterday after taking matters into his own hands.

Dean Reeves, 50, wrote in large black letters: "Want your house painting? Don't be like Terry, pay the bill! Now you will!" on the front of the house he had previously painted cream.

Mr Reeves claims that builder Terry Taylor only paid him £650 of the agreed £1,150for the job on the the former North Star Club in Bolsover, Derbyshire – just over an hour down the road from Manchester.

Here is, Dean Reeves. AKA (insert your own) ... #BolsoverBanksy#WhiteVanManGogh

Speaking about the incident,  he said: "I gave him a quote for the job and he said he would 'ping me the money straight away'.

"I did the work and he said if I go back to give the back of the building another coat, he would pay me.”

In the interests of balance, and in no way as a comment on this specific case, small businesses and sole traders can suffer massively from people not paying their bills on time.

It's annoying when you run out of writing space and have to try squeeze the last letter in isn't it.....

After learning he wasn't going to be paid the remainder of the bill, Mr Reeves took matters very much into his own paint-covered hands.

However, in a hilarious twist, it appears Terry Taylor isn't fussed about the vandalism, saying: "I found out about it last night but I'm completely unbothered – It's just paint, the idiot."

"I've spoken to police now and they will be looking to arrest him – he's going to be done for criminal damage.”

A Derbyshire Police spokesman commented: "We received a call this morning reporting that a property in Welbeck Road, Bolsover had had graffiti painted onto it.

"It appears to be a dispute between two parties and we will be getting in touch with those involved in due course."