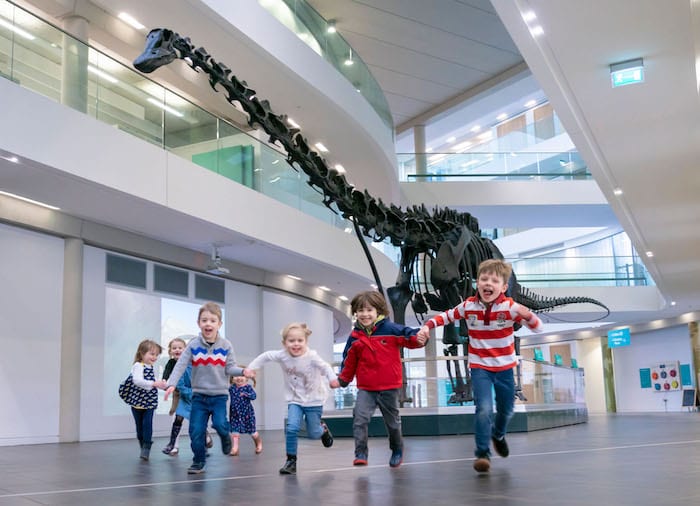 The Natural History Museum’s world-famous Dippy the dinosaur is starring in his very own TV documentary that’s hitting screens across the UK this evening.

And his extended stay at Rochdale is set to take centre stage.

The Dippy on Tour: A Natural History Adventure first opened in Rochdale at Number One Riverside and Touchstones as the only North West stop on its national tour back in February of 2020, with almost 115,000 visitors coming to see the dinosaur cast before the first national lockdown was put in place.

His arrival in Rochdale made waves and proved to be a smash hit for the region – especially after it reopened for a short time later in the year with safety measures in place – but the exhibition sadly had to be suspended on a number of occasions due to the ongoing coronavirus (COVID-19) pandemic, and so instead, Rochdale Borough Council launched an online offering in its place.

8,000 school children visited with their classes and hundreds joined in with special zoom sessions organised by the council’s children’s services team to enable children to engage with Dippy during lockdown.

It’s expected that this unprecedented rollercoaster experience for the exhibition will be touched upon in the documentary.

The six-part documentary series – Natural History Museum: World of Wonder – focuses on the famous London museum and its many special artefacts, with film crews getting special behind the scenes access to the institution’s treasures, and in episode two – which airs tonight at 8pm on Channel 5 – the team will feature Dippy’s visit last year to Rochdale as part of the national tour.

Film crews captured the 21-metre long dinosaur cast alongside local visitors, and had a chat with Rochdale Councillor Janet Emsley and Lorraine Cornish from the Natural History Museum as part of their episode about dinosaurs and other prehistoric treasures.

This isn’t the first time Dippy’s stay in Rochdale has made it to the silver screen either.

Late last year, Dippy made and appearance from Rochdale on the iconic children’s programme Blue Peter, where viewers tuned in to see young dinosaur fan, Warwick Carter, join presenter Ritchie Driss to place Dippy’s head on at the end of the build.

Speaking of Dippy’s star turn on television screens this evening, Councillor Janet Emsley said: “I’m not surprised that Dippy’s legacy is continuing, even now that he’s left our borough and I’m looking forward to catching up with my favourite dinosaur once more, albeit through my television,”

“Last year was a very difficult year, but Dippy was unquestionably a rare highlight, and it will be wonderful to be reminded of this wonderful exhibit and what a special time it was for our borough.”

Natural History Museum: World of Wonder continues on Channel 5 at 8pm this evening.