Manc parents reveal the most ridiculous reasons their kids have cried

The Manc asked parents as part of our ongoing question series designed to give our audience of loyal Mancunians the chance to share their thoughts and feelings. 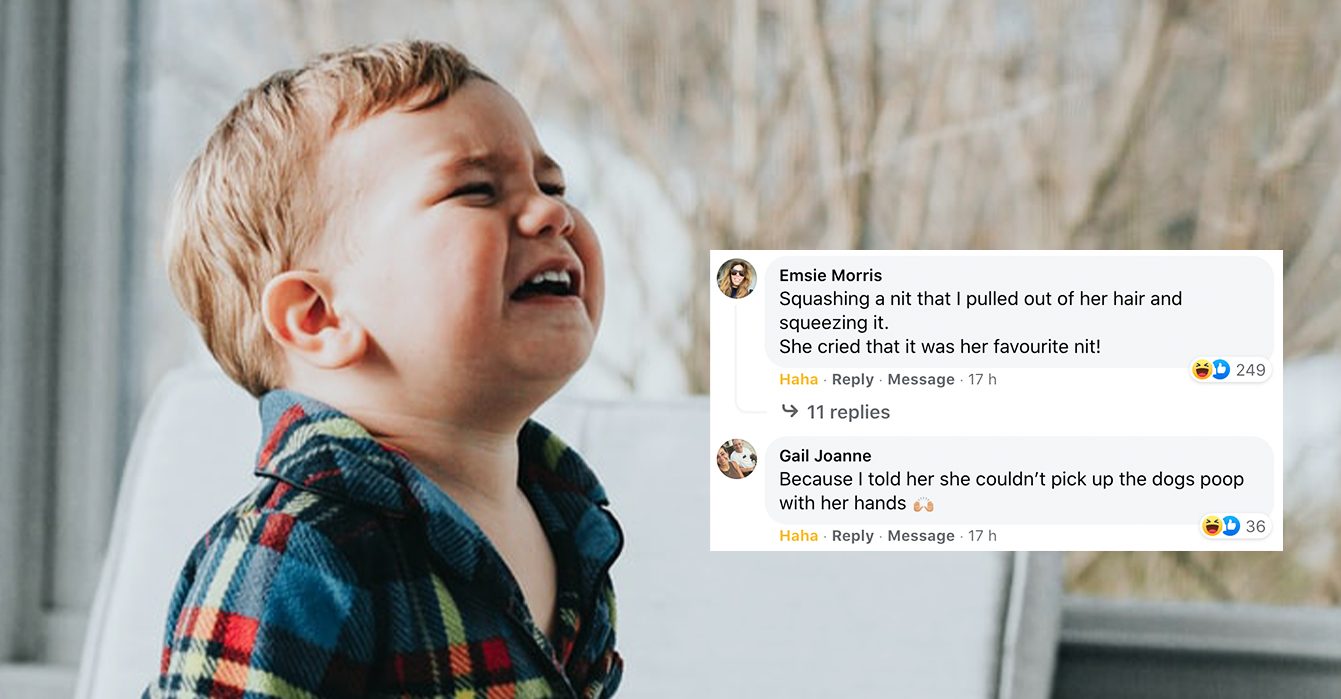 Kids do the funniest things.

It’s a saying we’ve all heard before and for better or for worse, most parents are armed with a list of anecdotes of hilarious things that their children have said or done over the years, which tend to come in handy at milestone birthday parties and events, or when they feel like embarrassing them for whatever reason.

It’s often the case too that the older the kids get, the more parents have to add to their arsenal.

There’s a good chance that a few of these hilarious anecdotes ended in tears, or in some cases, the tears are the reason the anecdote is so funny in the first place – and its these stories we were keen to hear all about.

So, as part of our ongoing question series on Facebook that’s designed to give our over 700K audience of loyal Mancunians the chance to share their thoughts and feelings on a wide range of topics and questions, we yesterday asked those parents looking for any chance to make their children red faced – What’s the funniest / most ridiculous reason your child has ever cried?

And we got thousands of responses in less than 24 hours.

If we decided to include every single one of these hilarious responses in this article, we’d be here all day and our sides would be well and truly split, but we have cherry-picked a few of the best to share.

“Because I wouldn’t let her keep a poo that looked like the Gruffalo. She’s still not over it 10 years on,” Christie Finegan said.

Lisa Powell added: “Because her hair was ‘copying’ her when she jumped on the trampoline.”

“My 3 year old daughter spent nearly 45 minutes crying because Daddy corrected her and said she wouldn’t grow a willy when she was older. The wails of “oh no! My willy will never grow” could probably be heard for miles,” Becca Lowe shared.

“My daughter cried because her hot chocolate was too wet,” Pauly Deester said.

Nicky Dudley added: “When my little boy was 3 he was having treatment for cancer the doctor told him this chemo would turn his wee red he sulked for hours cos he wanted blue wee not red years later we can now laugh about it he begged the doctor to change it to blue.”

“My youngest 22 years ago, cried his eyes out because the goldfish was drowning in the aquarium,” Ana Vitorino shared.

Cath Waterhouse said: “Because I wouldn’t let her have her pocketful of woodlice sleeping in her bed with her. And because we made her tidy-up when her tidying-up fingers were broken and not working on that particular day.”

“Because I told her she couldn’t pick up the dogs poop with her hands,” Gail Joanne added.

Are you keen to have your say? Reckon you’ve got a hilarious anecdote about your child’s tantrum that rivals the ones we’ve included here?