The pair offered their services at the FareShare GM foodbank at New Smithfield Market. 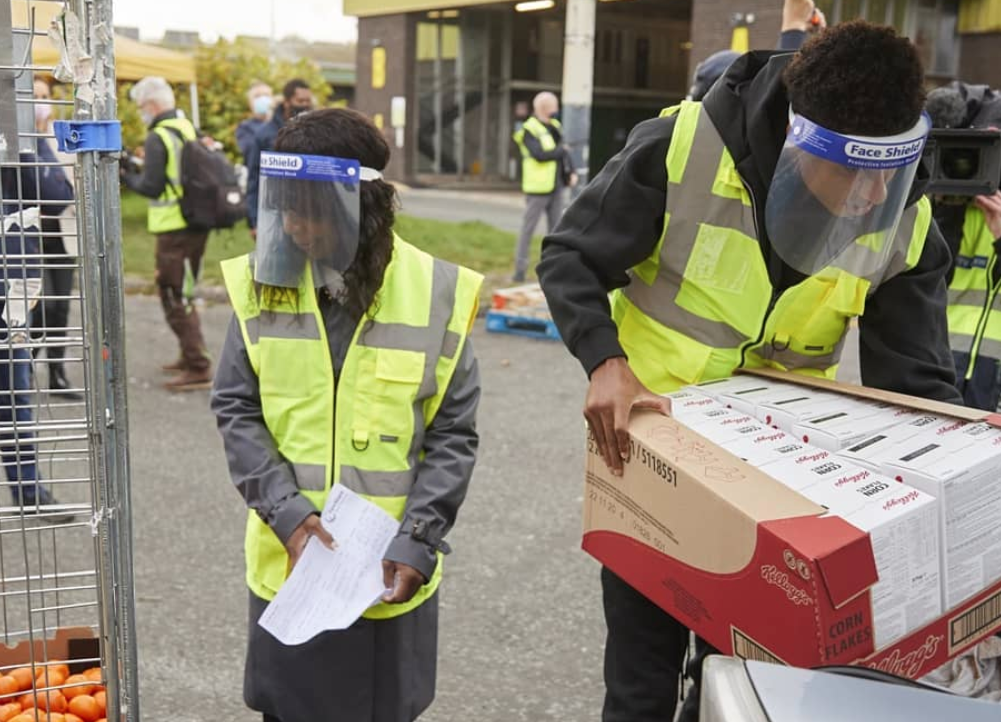 Marcus Rashford and his mum lent a hand by volunteering at a local foodbank in Manchester yesterday after his bid to extend the free school meals voucher scheme until Easter 2021 was rejected.

The Manchester United star has previously spoken out publicly of how his mum Melanie relied on free school meals and would often undertake 14-hour shifts at work in order to feed him and his four siblings while he was growing up in Wythenshawe.

And now, the pair had the chance to give back by offering their services at the FareShare Greater Manchester foodbank at New Smithfield Market yesterday.

Marcus and his mum visited a new FareShare warehouse – Melanie Maynard House – which has been named in her honour and will allow the charity to treble the quantities of food it gives out to those in need across the Greater Manchester region.

The pair helped volunteers to move and distribute boxes of food.

Taking to Instagram to announce the news of the newly-named warehouse after his “huge inspiration”, Marcus said: “The real superstars in this country can be found in the heart of most cities, towns and villages, working tirelessly to support our most vulnerable.

“To you all, THANK YOU for continuing to catch us when we fall.”

Speaking on his motivations for lending a hand yesterday, Marcus Rashford said: “When we stumble, there will always be a community to pick us up. For many that’s a foodbank.”

He continued: “The real superstars in this country can be found in the heart of most cities, towns and villages, working tirelessly to support our most vulnerable across the UK. As FareShare and other food-related charities approach one of the toughest winters on record, with demand higher than ever before, it is important that I lend my support wherever it is needed.

“Foodbanks are staffed with selfless volunteers protecting those most vulnerable – those who, in many cases, have fallen into circumstances due to illness, personal loss and unemployment. A lot of these volunteers have themselves suffered unemployment as a result of the pandemic, yet they still strive to help others less fortunate.

“That to me is the greatest example of what we can do, and the difference we can make, when we just work together.”

Lindsay Boswell – Chief Executive of FareShare UK – added: “We are disappointed with the outcome of the vote, which would have been the first step on the road to providing some peace of mind to the millions of struggling UK families.

“FareShare continues to provide over two million meals each week to vulnerable communities across the UK and we stand ready to provide all the food we can obtain, so we can continue supporting those families and children that seek help to access good, healthy food.”

You can find more information about contributing to FareShare Greater Manchester here.