Michael Owen has reacted to his daughter Gemma's raunchy dance on Love Island last night, and fans are finding it hilarious. 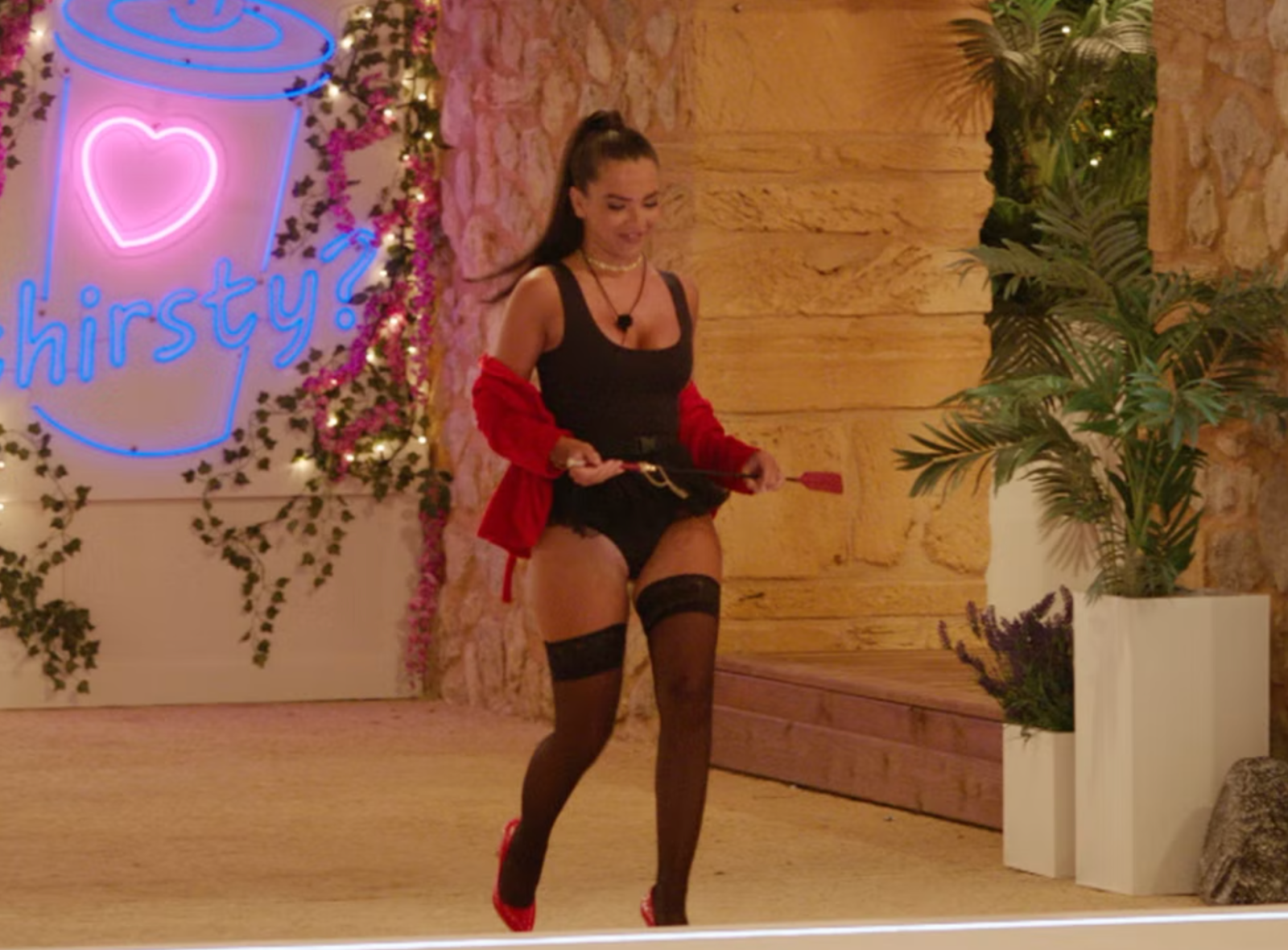 Michael Owen has reacted to his daughter Gemma’s raunchy dance on Love Island last night, and fans are finding it hilarious.

Last night’s episode of the hit ITV reality show Love Island saw the return of one of the series’ most popular and infamous annual challenges, where the islanders are hooked up to heart monitoring machines and are then tasked with performing raunchy dances for the other competitors to see who’s heart they can raise and who raises their heart the most.

It’s a challenge that’s known for bringing the drama and often becoming the catalyst for a fair few arguments in the villa – and last night was no exception.

As it was the turn of this year’s youngest contestant, 19-year-old international dressage rider Gemma Owen – who is the eldest of four children to Michael Owen – to take on the challenge, the former footballer took to Twitter to share his hilarious reaction.

Gemma was one of the first girls up, and while she danced for all the boys, she mostly focused on raising Luca’s heart rate – who she has been coupled up with for most of her time in the villa – and the two got closer than ever.

After Gemma successfully completed the challenge, her dad shared his embarrassed reaction on social media as he watched on from home.

A man of a few words, or in this case no words at all, Michael simply tweeted a single emoji of a person hiding their face and covering their eyes with their hands.

After the former England international and TV pundit – who notably played for big-name clubs like Liverpool, Manchester United, and Newcastle during his career – shared his reaction to the challenge, hundreds of viewers, fans, and even some famous brands and companies responded in the comments.

One viewer replied to Michael’s tweet: “Watching your daughter strip on prime time TV for a fisherman would have made my heart explode.”

“Wrong night to tune in mate,” another fan commented.

A third responded: “A dad’s nightmare. To be fair you should feel very proud. She’s a very mature 19 year old and can clearly hold her own.”

Specsavers, Boots, O2, and Deliveroo were some of the brands to respond to the viral tweet.

Michael Owen had previously already shared his thoughts about his daughter’s time on Love Island ahead of her taking part in the fan-favourite ITV show, calling it “every father’s worst nightmare”.

He said he was originally a bit “skeptical” when she first told him, but added that she is a “sensible girl” though.

He told ITV News: “I have no doubts that she will make us all proud

“It’s probably a father’s worst nightmare, but whatever she wants to do, you’ve got be supportive.”

The 42-year-old said he’d never watched the popular ITV show before, but he’s “heard a lot about it” and will tuning in this year, adding: “I think old, grumpy men like me will always have an opinion on it because I don’t watch it and you just hear the snippets, but she assures me that it’s not as bad as I think.

“So, we’ll give it a watch and I hope she enjoys herself.”

A Northern-based paint company has been hit with more than 100 complaints over its new TV advert, which has been branded “offensive”.

Crown Paints – which is based in Darwen in Lancashire – released the advert in question earlier this month, and through a cast of actors, singers, and spoken word performers, it tells the story of a young couple named Hannah and Dave.

The couple were said to have met at an illegal rave, and are now expecting their first child together.

Lyrics from the advert’s jingle include: “Now a baby’s coming and they don’t know what it is. Hannah’s hoping for a girl, Dave’s just hoping that it’s his.

“They’re happy that their spare room’s no longer grey because there’s a baby on the way.”

Since its release and airing on TV screens across the UK, an Advertising Standards Agency (ASA) spokesman said it had received 150 complaints about the advert – which it is “currently assessing to determine if there is a potential problem under our rules and, if so, whether there are grounds for further action”.

The ASA says the majority of complaints are mainly focused on whether the content in the advert is appropriate to be shown on television, as well as many taking to social media and calling it out for being “totally derogatory” towards women.

Comedian Jennie Eclair was one of the more prominent figures to complain to Crown Paints on social media earlier this week, tweeting: “Hey Crown Paints, get that offensive baby ad off air – what were you thinking!!!? What on earth possessed you?”

Author and podcast host, Daisy Buchanan, was one of the many people to welcome Eclair’s tweet and say in response: “I honestly thought it was me being mad”.

One viewer took to Twitter and said: “Totally derogatory of women, questioning her fidelity. Take it off because it won’t sell much paint.”

Others said it was “offensive”, “misogynistic”, and a “serious error of judgement”.

Crown Paints then responded to Eclair’s tweet saying: “Our ads are intended to give a humorous account of our characters’ stories. We appreciate that people have differing tastes when it comes to humour and whilst the ad has been broadly well received, we apologise if the remark has caused offence to anyone.”

But Eclair still said she felt that the advert “set up a scenario that implies a woman has possibly conned a man into fatherhood”.

Following both the growing online backlash, and the 150 official complaints about the advert, Crown Paints has issued a formal statement addressing the claims.

A spokesperson said: “This ad is one in a series that is intended to celebrate special moments in life in a humorous way.

“The characters of Hannah and Dave are shown to be in a happy relationship and preparing for their new arrival. There are no negative connotations intended from any of the lyrics and whilst the ad has been broadly well received, we recognise that people have differing tastes in humour.

“We apologise if any of the lines have caused offence.”

Gardening experts are warning that the annual phenomenon known as Flying Ant Day is right around the corner, and it could be “any day” now.

With temperatures having been soaring in Greater Manchester over the past couple of days, as the UK experienced the second heatwave of the summer, pest controllers were warning that an influx of “sugar-crazed” wasps was likely to come with the warm weather – but now, it turns out the wasps aren’t the online insects we need to brace for.

Flying Ant Day is apparently on its way too, and it could be here before we know it.

As a thunderstorm warning now in place for much of the country, with heavy rain, wind, and general stormy conditions forecast set to bring potential flooding, damage to buildings, and disruption, the change in weather could also bring flying ants.

Post-heatwave is usually considered to be the ideal time of year for the creatures fill the air in swarms, according to experts, but while the annual occurrence is called Flying Ant Day, most of the time, it isn’t just a one-day thing.

But what actually is Flying Ant Day? What should we be expecting? And is there any way to make sure flying ants don’t get inside our homes?

What is Flying Ant Day?

To sum it up simply, Flying Ant Day – which is scientifically referred to as nuptial flight – is a natural annual event that sees countless of the flying insects take to the skies in a bid to avoid the heat.

It marks the day or time of year where virgin queens mate with males to start new colonies.

While it’s impossible to predict an exact day for the annual occurrence, there have been warnings that 2022’s Flying Ant Day could take place any time from 15 August, so we’re already a day overdue and it’s worth keeping an eye out.

What are the experts saying?

“Most of us have been enjoying the heatwave, but while we’ve been making the most of the sun, a storm has been brewing,” explained Chris Bonnett – founder of Gardening Express.

“There is no specific day for Flying Ant Day, it’s usually just around mid to late August and it typically happens after a heatwave [and] the reason for this being that ants prefer humid weather and they use this time to get on the lookout for a new home and whilst that’s all well and good, it becomes a real nuisance for those of us who enjoy spending time in our gardens and outdoors.

“Ants in the UK aren’t dangerous, but they can be extremely irritating.”

How can I stop flying ants getting into my home?

Gardening Express has also given a handful of top tips to keep flying ants outside and stop them from entering into our homes.