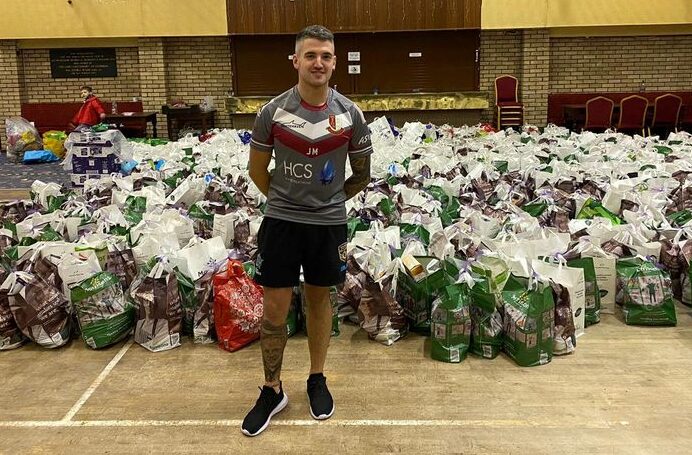 A scaffolder who was inspired by Marcus Rashford’s campaign for free school meal vouchers during holidays has achieved his own amazing feat.

Jordan Mattinson – 27, from Whitehaven in Cumbria – has managed to secure a whopping £11,000 worth of food to feed children over the Christmas holidays, and has even taken in a delivery of 20 tons, which will feed around 2,000 families in his community.

The amazing haul of 4,000 carrier bags full of food was so big it needed its own articulated lorry to be delivered to a social club, where it was stored ahead of being distributed.

Jordan and a group of pals launched the Copeland Christmas Food Project after the government rejected pleas to extend free meals for kids over the festive break, and even though the government eventually made a U-turn on the decision, the group decided to continue with the project.

They’ll now be able to help feed thousands of children from more than 50 different schools in the region.

Speaking on the incredible achievement, Jordan said: “When Marcus Rashford asked the government to extend free school meals into the Christmas holidays and they said no, I set up the fundraising campaign. We were just going to donate food to a couple of schools whose children needed it, but it grew arms and legs.

“I was blown away by the support and generosity of people [and] we’ll be able to feed 2,000 families. We got in touch with so many schools who were so grateful for it and said they had children who needed the help.

“We don’t get involved with the families directly as it’s a very sensitive thing for them and some of them find it embarrassing, but we ask the schools how many children they have on free school meals and donate it to the schools who distribute it to the families who need it.”

Jordan and his fellow organisers of the Copeland Christmas Food Project – Danny Dougherty, Josh and Rikki Tweedie and Beth McGregor – bought 26,000 individual items from Aldi’s Whitehaven store, which made up 4,000 carrier bags.

This means that each family is set to receive two bags of food.

On advice from the local food bank, the group prioritised long-lasting foods such as pasta, rice and soup, which would last for the entire two-week holiday period.

Jordan added: “It came on 32 pallets, it took a lot of effort to pack, there was around 50 volunteers. It’s been really nice to see people coming together and helping each other out.

“I have never been more proud or happy with anything I’ve ever been involved in.”

He continued: “The response was overwhelming. It was just an unbelievable response from the community, all the volunteers and businesses who have helped us.

“It’s been eye-opening, the more we did this, the more we saw how many people actually need help [and] you don’t realise it’s so rife, people are really struggling and it is hard for them. People are finding this year harder than other years with the pandemic and people losing their jobs, so even more children are on free school meals than ever before.

“The response from people in need has been overwhelming [too],

“[And] schools were so grateful for the help, and we’ve had messages from people who have needed help.

“As our food will be none perishable items, they will keep and hopefully help families at a later date if needed and make for a more comfortable Christmas.”

A spokesman for The Whitehaven Academy – one of the local secondary schools set to receive donations of the food – said: “We would like to say a huge thank you to the Copeland Christmas Food Project who have provided us with food parcels for our families.

“[It’s a] fantastic effort by the team and wider community, [and] together, no child will go hungry in Copeland this Christmas.”