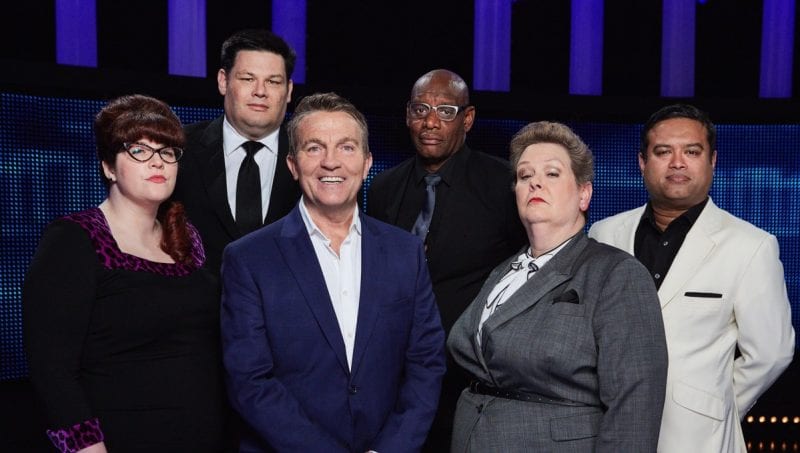 Does anyone have what it takes to 'Beat The Chasers'?

ITV has confirmed that a brand new prime time spin on the smash-hit quiz show The Chase is set to hit TV screens across the UK next week.

Beat The Chasers is a consecutive five-part series where challenging contestants will take on two, three, four or all five Chasers at once.

It is of course hosted by Bradley Walsh and stars all five of the nation's favourite quiz geniuses: Mark ‘The Beast’ Labbett, Anne ‘The Governess’ Hegerty, Paul ‘The Sinnerman’ Sinha, Jenny ‘The Vixen’ Ryan and Shaun ‘The Dark Destroyer’ Wallace.

ITV recently aired an intense 30-second television advertisement for the show with host Bradley Walsh saying: "Thousands of people have beaten a Chaser, now for the first time ever all five Chasers have formed the greatest quiz team on the planet."

The advert was also teased to fans in a post across it across social media that reads: "All five Chasers are forming the greatest quiz team on the planet."

"Do you have what it takes to Beat The Chasers?"

All five Chasers are forming the greatest quiz team on the planet.

Do you have what it takes to Beat The Chasers?

The show will see contestants from the studio audience called down to compete.

According to ITV, the premise for 'Beat The Chasers' is as follows - if you don't fancy having any of the fun spoiled, then perhaps stop reading here.

"In the Cash Builder they’ll face five multiple choice questions, with the chance to bank up to £5,000, but get the first question wrong - they’re out!"

"Next, contestants are given the option of playing between two and all five Chasers for increasing amounts of money, but with a decreasing time advantage against them. As the money goes up, so does the number of Chasers they must face, but those brave enough to take on all five Chasers could walk away with a huge cash prize."

"Play sees questions swap from contestant to the Chasers, but get a question wrong and their individual or team clock keeps counting down until a question is answered correctly. First to run out of time loses the game."

Can anyone actually beat the chasers then?

You'll have to tune in to ITV on Monday 27th April at 9pm to find out!