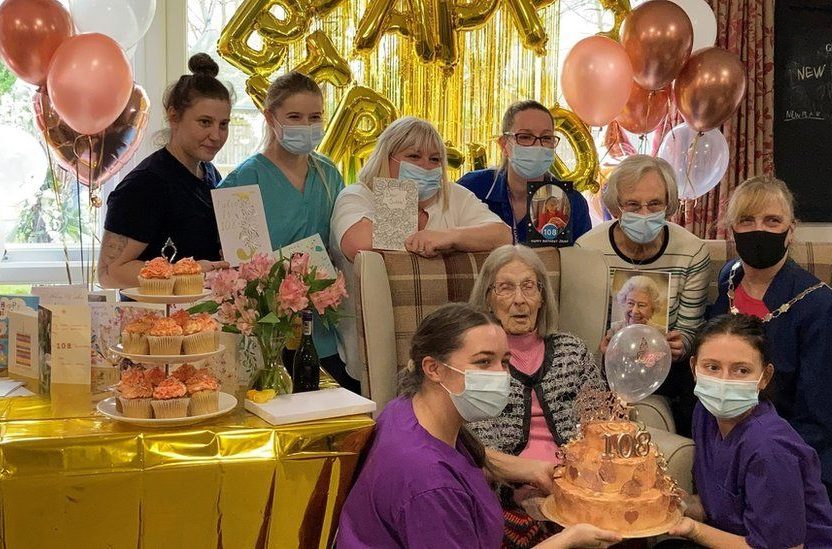 A Northern nan celebrating her 108th birthday has admitted that has said a daily glass of red wine is the secret to her long life.

Julia Iverson now lives at Brampton Lodge care home in Warrington, but she was born in Denmark all the way back in 1914, and even served in Kenya in the Women’s Royal Naval Service in World War II, before going on to have three daughters, five grandchildren, and three great-grandchildren.

Mrs Iverson tested positive for COVID-19 twice since the pandemic began, but managed to only had have mild symptoms and recover well both times.

Staff at the care home describe Mrs Iverson as a “lovely and kind person”, and her daughter Roselyn says that she is a “great supportive mum” who enjoys singing, cups of tea, snack pots of custard, and keeping “a positive outlook on life”.

Mrs Iverson has marked her impressive milestone of 108 years this week, with a well-deserved birthday bash.

As well as the celebrations hosted at the care home, Mrs Iverson also received dozens of cards and greetings from members of the public after care home manager Debbie Davidson posted a message on Facebook, as well as a special card from the Queen.

But what is her secret to living for as long as she has? Red wine, of course.

Like a true champ, carers at Brampton Lodge joked how she always knows if glasses of her favourite red wine have been watered down or not.

Her old age doesn’t mean she isn’t living life to the fullest though.

Mrs Iverson’s daughter says her mother “still talks a lot and sets the subject of conversation”, is often reminiscing about her childhood and adolescence, and finds it “amazing how different life is now” after recently learning about emails and comparing them to the telegrams she used to send.

Staff at the home described themselves as “one big family”, and said taking care of Mrs Iverson was “a pleasure”.