Helen and John Brierley welcomed 10-year-old Boxer Mastiff cross Sugar into their home so she can spend her final days in comfort with "unconditional love". 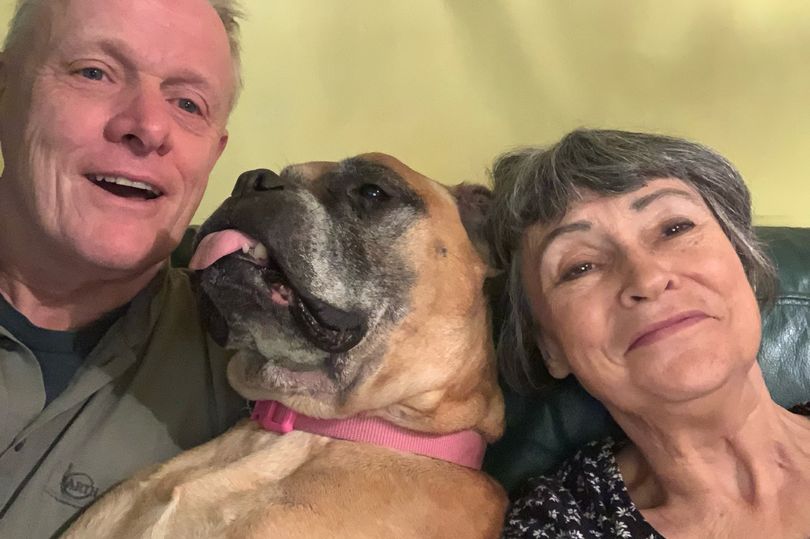 A retired northern couple have explained their decision to foster a dog who only has a few months left to live.

Helen and John Brierley, both aged 64, welcomed Sugar into their West Yorkshire home so she can spend her final days in comfort with “unconditional love”.

Speaking on their decision to give Sugar the best farewell possible, Helen – a part-time carer – told TeamDogs: “My partner and I are now semi-retired, so we took on a boxer four years ago who was a senior rescue dog called Charlie and was lovely company – she became part of the family.

“When we had to put her down, John and I were absolutely devastated, and we said we wouldn’t have another dog.

Helen continued: “Initially, we thought it’d be a no-go to foster her because we had two guinea pigs in the house, but she appeared not to be bothered by them at all.

“Her condition might be a bad thing to many people.

“But for us, we saw the bit of life that’s still in her, and we wanted to give her a chance.”

The couple explained that Sugar has taken everything in her stride and found herself very comfortable in the house, which has allowed Helen and Jon to provide her with the palliative care she needed.

“Originally, we thought that if it’s only a short term foster, then we might not get too attached to Sugar,” Helen said.

“But it’s not working as we thought and we are now very attached to her.

“She’s a lovely surprise in many ways. She’s great on the lead and enjoys a short walk. She’s not aggressive to other dogs, which is completely unlike Charlie, who was a puller.”

Staff at Pennine Pen Animal Rescue said Sugar stayed with the rescue for six weeks but “didn’t have much interest at all” before they sent out an appeal on Facebook and Helen and Jon were found to be suitable.

The rescue centre later announced the heart-warming news of Sugar finally finding a foster home on its Facebook Page to endless praise for Helen and Jon.