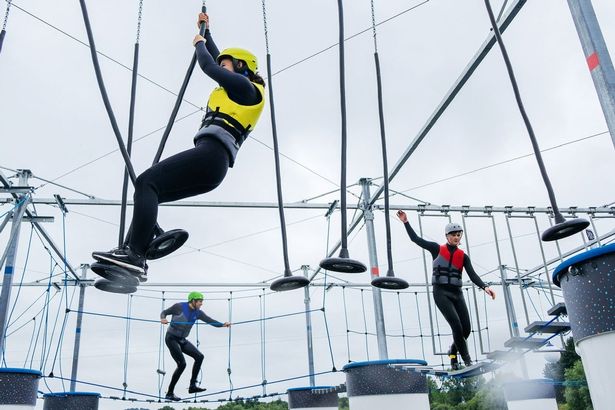 A brand new first-of-its-kind floating obstacle course has opened up near Delamere Forest and it’s only 40 minutes away from Manchester.

The huge new attraction, which is based at Delamere Lake Sailing and Holiday Park, is described as being “super unique” and is packed full of fun and challenging elements featuring obstacles, rope swings, climbing walls, ziplines and more.

It promises to offer visitors an “endless opportunity for fun”.

Deemed a “world’s first” of its kind, Aqua Chimp is for adults and children (aged eight and above) of all abilities. It has different coloured runs/courses to match the participant’s level, but what makes the concept so unique is the lack of harnesses, meaning if you fall off, you will get wet.

There is also a minimum height restriction of 1.2m and you must be able to swim 25m.

If this sounds a little daunting though, don’t worry because instructors deliver a safety briefing before each session and offer full support/instruction throughout.

Speaking on the opening of Aqua Chimp, Wild Shore Delamere’s Tim Woodhead said: “It is the world’s first Aqua Chimp, it is based on a fixed course that is very similar at one of our parks in Edinburgh.”

“It is mega easy to socially distance on too, which is great during these strange COVID times.”

A number of strict COVID-safe measures have been put in place and must be adhered to by all visitors.

These measures include pre-booking only (no walk-ins), a one-way system, on-site hand sanitising stations, outdoor changing cubicles, no on-site picnics, and after every use, the kit is washed in a special solution and left to soak for 15 minutes, before being hung outside to dry.

Aqua Chimp sessions cost £20 per person, last for a total of 50 minutes and must be booked online in advance.

All kit hire is included in the session price, so participants just need a swimming costume, a towel and a pair of closed-toe shoes that they don’t mind getting wet.