Alongside the official parties, there are some great fringe events taking place across the city for Manchester Pride. (This article contains affiliate links) 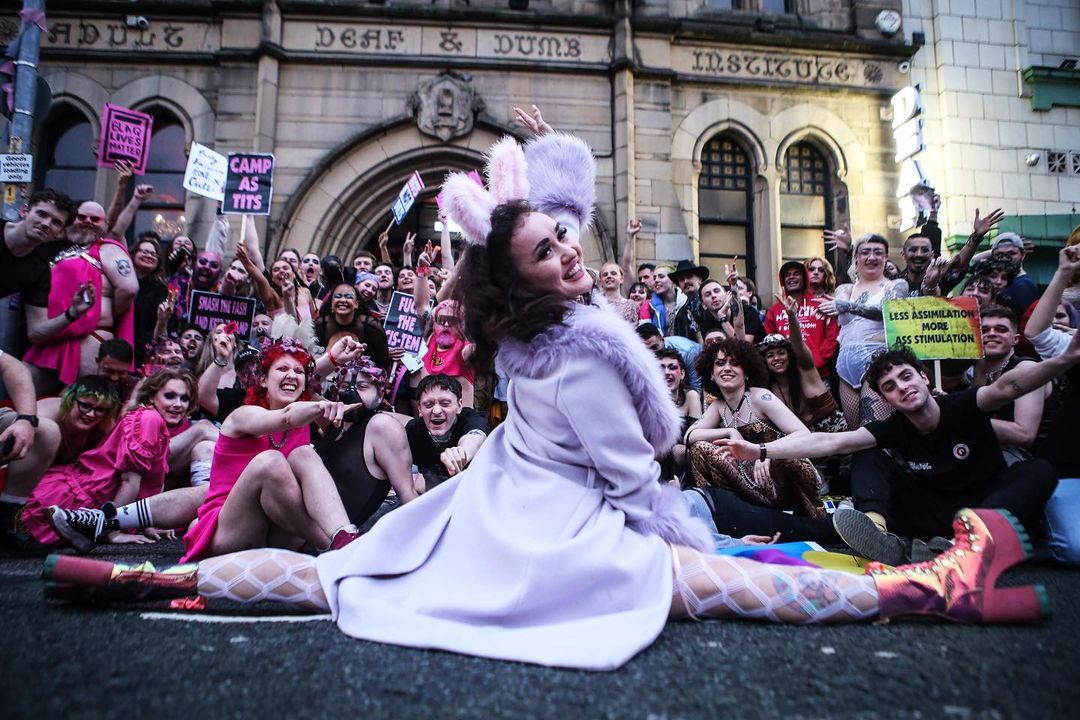 Whilst the rest of the UK celebrates Pride month in June, here in Manchester we like to stretch it out all summer long – culminating with a huge celebration on the last weekend of August.

Every year, thousands come together for Manchester Pride to celebrate love in all its forms with a dazzling parade through the city and a weekend-long street party in the Gay Village.

Beyond that, there are loads more Pride parties and events in Manchester to discover.

From the decade-long queer club night Bollox, famed for its widely eclectic music policy, to The F*ck Pigs, an off-shoot of discontinued gutsy gothic club night Body Horror (featured in the 2019 Boiler Room short film Queer Raving in Manchester’s Twilight Zone), there’s somewhere for everyone to celebrate being themselves – if you know where to look, anyway.

This list will be regularly updated as new events become available.

Promising ‘seven savagely proud hours of clubbing’, long-running queer night Bollox will return to its home at The Deaf Institute over the long August weekend for its annual Pride party.

Spanning all three floors of the venue, this hedonistic party consistently sells out – so don’t hang about on tickets.

Get tickets for Bollox Queer Pride

Love is the Message at Escape to Freight Island

Escape to Freight Island is going all-out this August bank holiday with five days of Pride parties bringing some of Manchester’s best queer selectors and performers to the fore.

Across the course of the long weekend, head down to catch sets from She’s in Control, Ghetto Fabulous & Mix-Stress, The Little Disco by La Discothèque, Homohangover and Homopicnic from the team at Homoelectric, plus a Pride family party with crafts, a raffle and more.

Come As You Are weekender at The Refuge

The free-of-charge Come as You are weekender at The Refuge is one of Manchester’s favourite Pride parties – going all-out with a range of performers and appearances from fabulous queens Cheddar Gorgeous and Liquorice Black.

This year’s event will feature headline sets from The Reflex and John Morales, alongside support from The Hush Club, Julie Willis, Jimmy Turnbull, Supernature Disco, Sticky Heat, The Colonel and Steve Conrey – all flaunting the energy and unity that Pride brings to the Manchester LGBTQA+ community.

Your Dad Sells Avon at The Star and Garter

With an all-trans, non-binary and POC line-up featuring some of Manchester’s best-known queer artists and Influencers, this new Inclusive 90’s style techno rave sounds like it will be a blast.

Organised by male gogo dancer Ali after he noticed an absence of trans, NB and POC working in venues in and around the Gay Village, it will bring together trans influencers and models, non-binary performance artists and DJs at one of Manchester’s most iconic venues.

With sets from Meme Gold and ‘This Guy DJ’ who plays at some of Manchester’s coolest raves, plus a 5,000mw laser show, this is definitely one to put on your list.

Get tickets for Your Dad Sells Avon

A host of pride events come to Kampus this bank holiday, running from Thursday to Sunday. Saturday afternoon sees the return of LOVE PARTY in the bungalow from 2 – 10pm.

Returning to party in the Kampus Bungalow and gardens, once again the line-up is stacked full of local queer talent including Kiss Me Again, Good Afternoon, Love Party resident Thom Docking and the return of Pumping Iron to Manchester.

Elsewhere across the weekend, there’ll be a BarkPRIDE fancy dress dog show in the gardens on Friday and an  Ancoats Pop-Up market on Sunday.

Drop The Mic and Queers at the Old Abbey Taphouse

Manchester-based arts communities Drop The Mic and Queers In MCR are hosting a Pride Celebration Event at The Old Abbey Taphouse in aid of the LGBT Foundation, featuring an incredible lineup of LGBTQ+ poets, musicians and DJs, as well as a queer art exhibition.

The night will include a special DJ set from an icon of the Manchester queer scene Jess Rosa, a ferocious performance from all non-binary punk band Taurine and a beautiful visual arts presentation entitled ‘Queer Joy’ curated by the illustrious Mr E.

Get tickets for Drop The Mic and Queers

‘Freedom to Be’ parties with Gok Wan at Ducie Street Warehouse

Ducie Street Warehouse kicks of its new ‘Freedom to Be’ party series with a free-to-attend dance featuring a DJ set from the one and only Gok Wan.

Kicking off from 5pm until late, the warehouse will welcome the sensational national presenter and DJ Gok Wan with a supporting set from Manchester queer collective Queer Latifah.

The party then continues on August Bank Holiday weekend with spectacular BIG disco brunches, plus an all-weekend line-up featuring some of Manchester’s best DJs and performers including The Niallist, High Hoops, Ghetto Fabulous, Girls On Film and Fat Camp.

Sonata will celebrate Manchester Pride with an intimate cabaret of classic hits and musical theatre, with a headline set from Nicole Faraday (Bad Girls, Casualty, Emmerdale) on Saturday night, well known for her portrayal of Eva Cassidy in Over the Rainbow.

Sunday night will feature an performance of the award-winning Bette: Bathhouse to Broadway!, a loving tribute to the life and career of Bette Midler. Elsewhere, Friday will bring jazz and musical theatre cabaret from Vivienne Lynsey.

Cottonopolis will hold a special bottomless drag brunch in honour of Pride. Hosted by queens Narcissa Nightshade and Lilly Snatchdragon, there will be a free Cirôc Vodka cocktail on arrival for those who pre-book. As for the food, think sushi rolls, rice poke bowls, stuffed baos and Japanese toast.

The party then extends across the weekend with sets from Queer Latiffa, Deb Jump, Mixtress, Joy Social, Laura Jackson, DJ Duckdown, and J’Adora.

Read more: The Manchester Pride Parade will return this summer after two-year break

The Big Gay Bottomless Brunch at The Black Friar

Running from 11am – 3pm across the long weekend, Salford gastropub The Black Friar has created a one off brunch menu in honour of Manchester Pride.

For £35, you’ll get 90 minutes of non-stop fizz and lager, plus a brunch dish of your choice. £2 will be donated to LGBTQ+ Youth Charity AKT.

Keller Queens at The Bierkeller