We popped down to the swanky new Spinningfields restaurant for a first look inside. 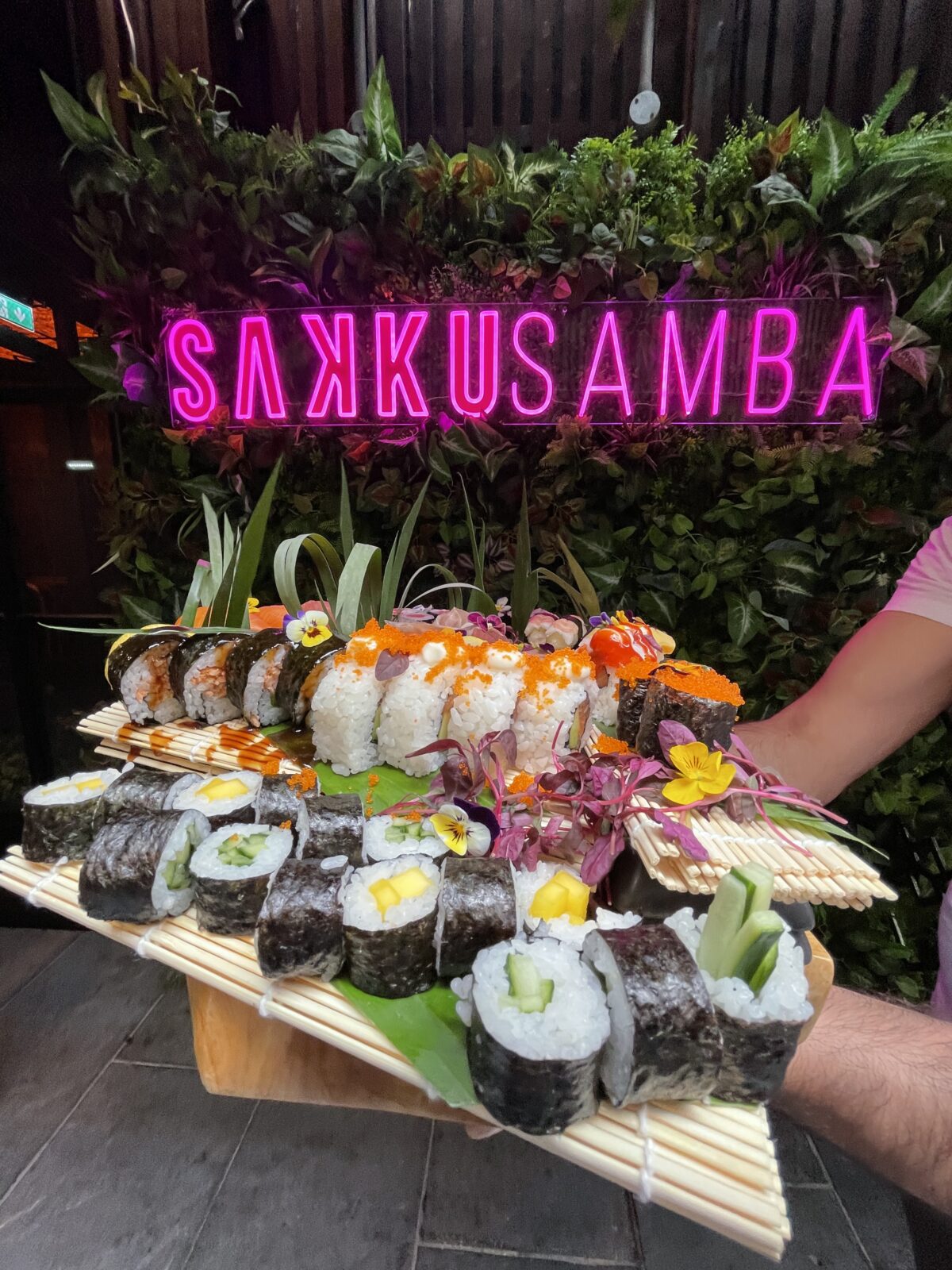 A huge new restaurant has just opened up in Spinningfields, taking over the former Artisan and Manchester House sites.

Called Sakku Samba, it will fuse Brazilian and Japanese cuisine together in a swanky all-you-can-eat setting – complete with fistfuls of pink sakura trees, floral walls, neon lighting, and plenty of selfie traps, not least a room filled solely with giant lightbulbs.

Split across two floors, the new space includes a ground-floor caipirinha bar and a first-floor restaurant and bar with room for 400 covers, as well as two plush private dining rooms.

Elsewhere, there is a second restaurant for VIPs only with its very own access and private VIP corridor – something that is sure to appeal to the city’s glitterati crowd.

Brought to the city by restauranteur Zack Isaak, the new arrival borrows from two popular concepts already well-established across the Pennines and promises a glitzy cocktail menu alongside a range of sushi platters, prime Brazilian steak cuts and small plates.

The new dining concept will see guests order fresh sushi and traditional Brazilian meats
in unlimited quantities via digital tablets on each table, meaning they will have access
to over 150 varied dishes at the simple click of a button.

From Brazilian picanha and pork belly to Japanese hosomaki and fresh sashimi, the
extensive menu at Sakku Samba celebrates a fusion of two distinct cultures.

Though this is restaurant owner Zack Isaak’s first Manchester-based endeavour, his other
restaurants SAKKU and Estabulo have proven to be extremely popular with sites all across
England.

Speaking on the new concept, Zack Isaak said: “Sakku Samba is all about creating an incredible dining
experience. From the moment guests walk through the doors, to the minute they leave they’ll
be blown away by our stunning decor, unique cocktails, beautiful menu and high end
service.

“We wanted to come to Manchester with a bang, and that’s exactly what we’re
going to do at our launch tomorrow evening. SakkuSamba is set to become the go-to place
to dine here in Manchester.”

Sakku Samba’s arrival in the business district comes at a time of change for the area, which has been dominated by current and past Living Ventures businesses like Australasia, Manchester House, The Alchemist, and The Living Room almost since its inception.

This year will see more out-of-town concepts follow in its wake, with the planned arrival of brands like Sexy Fish in the former Armani unit, Giggling Squid in the former Carluccio’s site, Soho House at nearby Granada Studios and Mnky Hse at nearby Lloyd Street.

The restaurant will open its doors to walk ins on Wednesday 27 July following a swanky VIP launch party on Tuesday. Bookings can be made online now from 1 August onwards by visiting their website,
www.sakkusamba.co.uk.

A huge new restaurant has opened up in Spinningfields, returning a touch of glamour to a part of the district that has lain empty and forgotten for years.

Taking over the former Artisan and Manchester House sites, once a mecca for Manchester’s glitterati, it

Complete with fistfuls of pink sakura, neon lighting, and its very own VIP restaurant with separate access and corridors, this huge block of real estate has become a place for the city’s glitterati to gather once more.

The new restaurant and bar will launch

its Instagram-friendly brand of dining to Manchester – complete with a special VIP dining area and corridor.

Taking over the former Artisan and Manchester House sites to form a glamorous all-you-can-eat behemoth, newcomer Sakku Samba fuses together Brazilian and Japanese cuisine under one roof.

Inside, there are two bars, two private dining rooms, two restaurants (one for VIPs only) and a special private corridor for

the concepts of Estabulo Rodizio, an all-you-can-eat Brazilian steakhouse with a number of popular sites in Yorkshire, and Leeds’ all-you-can-eat sushi and Japanese grill venue, Sakku.

Split across two floors,  ground-floor caiprinha bar and a first-floor restaurant with room for 400 covers.

At 400 cacpacity, it’s absolutely huge – with two private dining rooms, a private VIP corridor and restaurant as well as