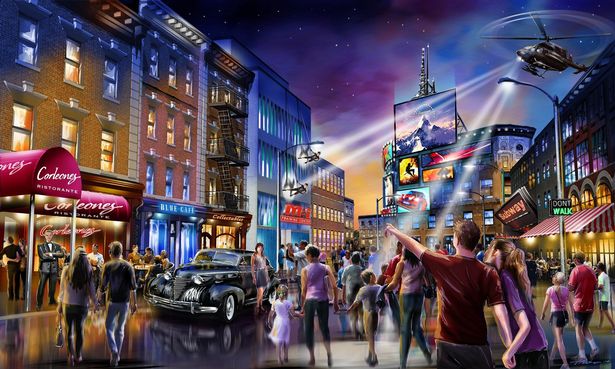 The latest artist impression images for “the UK’s answer to Disneyland” have just been released and they offer an insight into some of the rides and themed-attractions.

News of the first plans and blueprints for the £3.5 billion project were released in December last year and the latest plans – which were also open for public consultation – were released back in July.

If those newly-released plans – dubbed ‘the evolved masterplan’ – are given the green light to go ahead, The London Resort would be the first park of its kind to be built from scratch in Europe since Disneyland Paris in 1992, and new Chief Executive PY Gerbeau said the industrial site would be “transformed into one of the most exciting destinations in the world”.

According to the new plans, The London Resort will include four hotels, that boast a total of around 3,500 rooms, as well as dozens of rides, attractions, entertainment, eSports and conference venues, all across two theme parks.

These latest artist impression images have been revealed to the Mirror.

The park’s creators are currently remaining tight-lipped about exactly what rides will be on offer, but last year the resort signed a deal with Paramount Pictures, so a Hollywood theme is very much on the cards, and judging by these latest images and plans, it’s a theme that certainly seems likely.

As well as Paramount Pictures, BBC Studios and ITV Studios also partners with The London Resort.

The area of land – which spans around 872 acres – is currently an industrial site located near the areas of Gravesham, Dartford and Thurrock, and as previously mentioned, the resort’s planners recently held a public consultation to showcase how the area will be transformed into the new theme park.

The consultation lasted eight weeks and reached over 120,000 members of the public.

It showed that 73% of people support The London Resort’s approach to the environment and biodiversity, which includes enhancing local habitats to continue to support the wildlife that reside around the site, and 65% of those who took part also agreed that The London Resort will benefit the local area in the longer term.

It has also been confirmed that The London Resort will be submitting its DCO application later this year.

Speaking on the outcomes of the consultation and the release of the latest images, PY Gerbeau – CEO at The London Resort – said: “Getting to this point has not been easy, but the public has responded overwhelmingly in favour and for that we are deeply grateful.

“We will go through all of the feedback and use it to help inform our approach and further develop our proposals, but there is no doubting, that our aim of creating one of the most exciting entertainment destinations in the world, here in the UK, has taken another big step towards becoming a reality.

“We now look forward to submitting our DCO application later this year.”

If the latest plans are successful in securing development consent, construction is projected to begin on The London Resort in early 2022, with a potential opening date in 2024.

You can find more about The London Resort here.