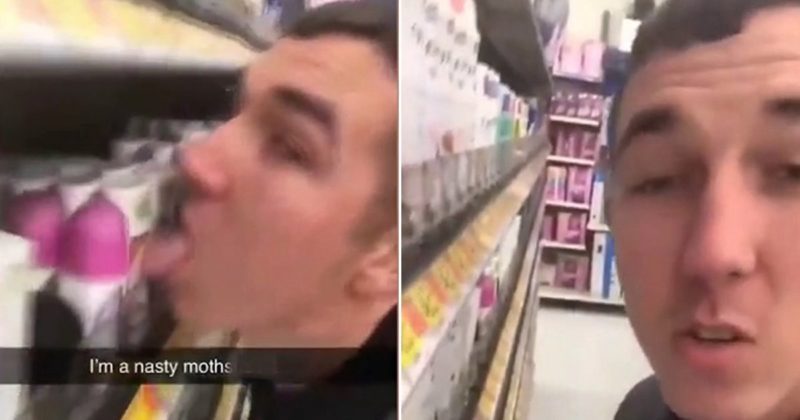 A man who filmed himself licking products on supermarket shelves and saying "who's afraid of coronavirus?" has been arrested on terror charges.

The disgusting clip went viral online this week with tens of thousands of social media users lambasting the American responsible for it.

After this, police in Warrenton, Virginia, sprung into action and arrested a 26-year-old man – then charged him with making a terrorist threat.

Suspect Cody Pfister sparked a global backlash, including a campaign by Piers Morgan in which he called for the culprit to be locked up and refused medical help for deliberately trying to harm other people.

The Good Morning Britain host said: "This is of somebody in America, who went to a supermarket knowing the coronavirus is attacking everyone in the United States, and he did this and posted it online."

After the video went viral, the local police department in Warrenton were inundated with messages – and it didn't take long for them to release a statement on his arrest.

Find him, arrest him, imprison him, & deny him any healthcare if he gets the virus.
See how funny the disgusting little pr*ck finds it when his chest is collapsing & he can’t breathe. https://t.co/osWH8WOi2F

The statement said: "A local resident who took a video of themselves licking the merchandise after making a "Corona Virus" statement at Walmart and posting it to social media has been taken into custody.

"Charges with Warren Co. DA are pending. The police department confirmed the man was a local resident and said he was 'making a coronavirus statement' and had been taken into custody."

Referring to the far reaching reports they'd received, the statement added: "We take these complaints very seriously and would like to thank all of those who reported the video so the issue could be addressed."

There are at least 52,976 cases of coronavirus in the United States and 704 people have died, according to CNN Health’s tally of US cases that are detected and tested in the US through public health systems.